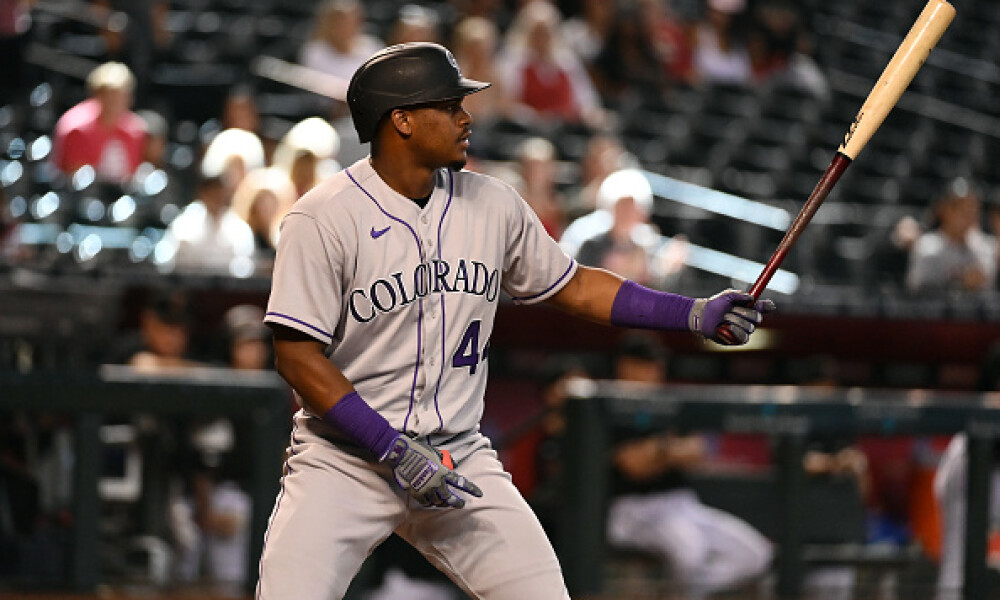 The MLB waiver wire always has something for everyone. Whether it is dynamic prospects promoted for the first time, Vaughn Grissom and Elehuris Montero, veterans trying to right the ship after a rough start to the season, there are always going to be players surging up the fantasy baseball rankings. Let’s take a look some MLB waiver wire options for Fantasy Baseball Week 19 to help improve your teams.

Talk about a debut. The dynamic shortstop was called up from Double-A by Atlanta prior to Wednesday’s game in Fenway Park to play second base, and all Grissom did was go 2 for 4 with a home run and a stolen base. At every level since 2021, Grissom has not hit less than .311 while showing off some power but it’s his stolen base prowess that appears to have a little more prevalence. In 74 games at High-A this season, Grissom hit .312 with 11 home runs and 20 stolen bases while also continuing to be a threat both in the runs scored and RBI department. The ability to be a true four-category contributor is here and it does not appear that he will be a total slouch in the home run department either. Grissom continued the success by hitting .363 in 22 games at Double-A prior to his promotion but perhaps the most remarkable thing was his strikeout rates at the two levels this year; 11.6% and 14.3%.

Remember, we cannot take the FAAB with us, so let’s strike on a young prospect (traded in the Nolan Arenado package) who was just promoted from Triple-A to play every day for the Rockies. Montero earned his promotion by hitting .310 with 15 home runs and 54 RBI in 65 games at Triple-A this season, and with Colorado committed to giving him a real chance to show what he can do over the last two months of 2022, my attention is piqued. Since his promotion, all Montero has done is pick up a hit in each of his eight games to start off his major league career batting .297 with one home run and four RBI.

By no means can we say Reyes did not deserve his fate after struggling this season with Cleveland, but I was also quite surprised to see him designated for assignment. The slugger is still just 26 years old and he is coming off a 2021 season that saw him hit 30 home runs to go along with 85 RBI in just 115 games, so there is some real talent here. While Reyes had a 32% strikeout rate, which does not fit with Cleveland’s overall plate approach, he did hit a solid .254. Things have been a little tougher for Reyes this season as he has just nine home runs and 29 RBI in 72 games to go along with a .218 batting average and 36.8% strikeout rate, but the power is still real. The Cubs wasted no time throwing Reyes into their lineup, and in two games thus far he is 3 for 8 and I expect them to give him regular playing time for the duration of the season. With a 13.8%-barrel rate and 47.3% hard-hit rate, Reyes is simply too good to sit on the waiver wire.

Yes, the Cardinals did play in Coors Filed this week, but the shortstop did bat .409 with two home runs and nine RBI over the last seven days. With a .191 batting average, five home runs, and 20 RBI to this point, it is safe to say that 2022 has not gone according to plan for the shortstop who also had a stint in Triple-A in an attempt to figure things out. DeJong hit .249 with 17 home runs and 54 RBI at Triple-A before getting the call back to St. Louis, and while batting average will never be his strong suit, DeJong can offer some pop from the middle infield. His 11.7%-barrel rate and 22.2-degree average launch angle do give me some hope for power production over the next two months.

This is the point in the season where it is all about following the hot hand and trying to catch lightning in a bottle. In the case of the career minor leaguer, playing time is now available to him in Washington, and in a small sample size to this point, he has delivered. In his first 25 plate appearances since Josh Bell was traded, Meneses has already gone deep four times while batting .348 with six runs scored and six RBI. In Triple-A prior to his promotion this season, Meneses had a solid 20 home runs and 64 RBI while batting .286 so the power is not anything new for him this year. Do not go crazy here, but if you have an open roster spot in deeper leagues, take a low-risk flier.

Suarez has picked up victories in each of his last two starts with 12 shutout innings which has brought his ERA down to 4.04 in 62.1 innings to go along with 61 strikeouts. The southpaw was also a serviceable option last season with a 3.75 ERA over 98.1 innings so this is not anything new and Suarez is worth a look once again this year if you are searching for some pitching over the remainder of the season.

Sears should get a consistent chance to show what he can do in Oakland’s rotation over the last two months of the season, and he got off to a good start on Wednesday against the Angels. In 5.1 innings of work, Sears allowed two runs on three hits while striking out three. The left-hander has a 2.30 ERA in 27.1 innings at the major league level this season, and he should be a solid starting pitching option over the remainder of the season as he also gets to take advantage of Oakland’s cavernous home park.

While not in line for saves, Texas continues to use Burke in high leverage situations which have led to two wins over the past 14 days and six overall this year. Burke continues to be a valuable commodity from a ratio perspective with a 1.23 ERA and 0.95 WHIP while also striking out 64 batters in 58.2 innings. As far as middle relievers go, sometimes they are certainly more valuable than middling streaming options, Burke checks all the boxes for what we are looking for.

Despite all of the buzz surrounding Brash entering the season, the right-hander had more bad times than good this season in the rotation prior to being sent to Triple-A. Brash is now back pitching out of the bullpen for Seattle and the right-hander has not allowed a run in his last five appearances over 5.1 innings while striking out eight batters. If you are looking for upside in the strikeout department without taking on the risk of a streaming option, Brash does have some upside.

With three saves over the last 14 days and seven for the season, Kennedy has to be on our radar in the eternal search for saves. Mark Melancon is still a factor in Arizona’s bullpen, but that has not appeared to stop Kennedy as of late, and with a 3.13 ERA and 1.26 WHIP, he is not going to hurt you from a ratio perspective either.

Join the Discord and get your MLB DFS and Fantasy Baseball questions answered by our Fantasy Alarm experts!