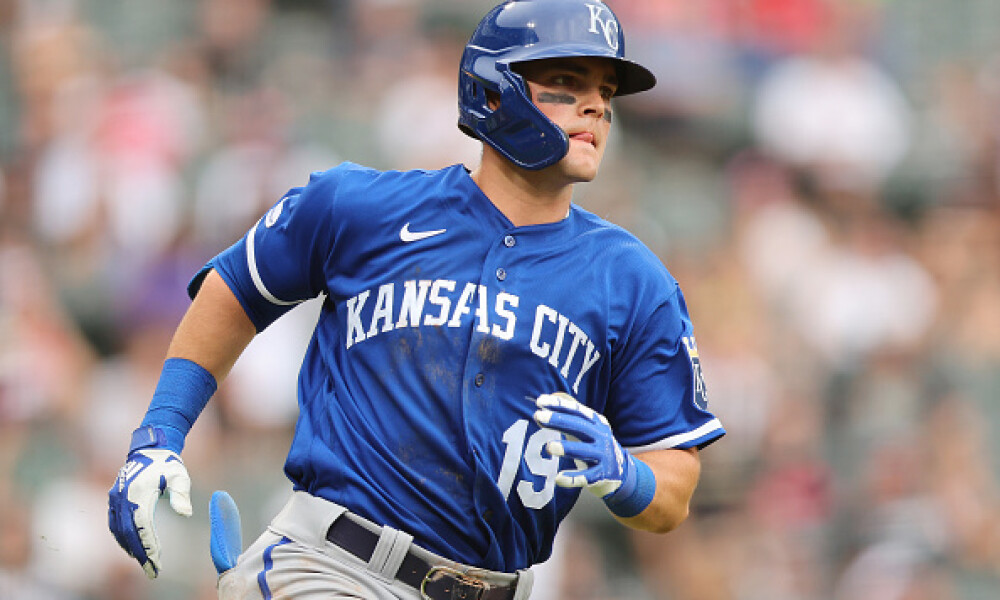 As we look towards a new week and the ever-evolving fantasy baseball landscape, the quest to improve our teams never ends. With the dust continuing to settle from the MLB trade deadline, we have young players getting a taste of the major leagues that might be worth some attention as they rise up the fantasy baseball rankings. Just because a prospect is promoted, it does not mean that we need to rush to the waiver wire and spend our entire budget, but at the same time, they should not be ignored either. Let’s take a look at some MLB waiver wire options that could help your team for either this week, the remainder of the season, or beyond if you are in a league with keeper or dynasty implications.

The former first round pick earned a promotion after posting a complete season through 89 games at Triple-A this season. At this point, there is not much left for Benson to prove in the minor leagues and it is now time for Cleveland to see what they can do at the major league level. Based on the decision to call him up on Monday, that is clearly the intention here, and now we just need Benson to find his footing. In his first five at bats, Benson has yet to pick up a hit while striking out three times after hitting .278 this season at Triple-A. Both the power and speed were on display for Benson with 17 home runs and 16 stolen bases while driving in 45 runs and scoring 75 times. Benson’s minor league career has been and up and down and strikeouts are going to be an issue, but I would exercise a little patience here.

Burdick is another young outfielder getting the call this week as the Marlins promoted him in advance of this weekend’s series. Let’s get it out of the way that strikeouts are going to be an issue here as Burdick’s 25.7% strikeout rate this season in Triple-A is an improvement over what we have seen in previous seasons from him. At the same time though, Burdick is more talented than a lot of other options floating around the waiver wire and he does have 14 home runs, eight stolen bases, 51 RBI, and 70 runs scored through 88 games this season. The Marlins did not promote Burdick not to give him a chance, so let’s see what he can do.

Things are a little different with Massey as it does not appear that we have to worry about batting average here. Following the trade of Whit Merrifield, Massey is in line for regular playing time after hitting .305 in 54 games at Double-A and .325 in 33 games at Triple-A to begin the season. Through his first 15 plate appearances with Kansas City, Massey picked up six singles while also stealing a base. While I do not expect Massey to be an especially prolific option, he did hit 21 home runs while driving in 87 runs and stealing 12 bases last year before continuing that success this year with a combined 16 home runs, 13 stolen bases, and 77 RBI.

While Davis has returned to action after suffering a hand injury last year, it was said at the time that it would be 10 to 12 months for him to return to full strength. With that being said, it should not be a complete surprise that Davis would struggle while also having to deal with infrequent playing time with the Mets prior to being traded to San Francisco. The Giants have wasted no time plugging Davis right into their lineup, and he responded by going deep on Thursday against Clayton Kershaw. Despite the fact that Davis is struggling against southpaws so far this year, he has had success against them in the past and I would prefer to focus on his 11.6%-barrel rate, 57% hard hit rate, and 93.2 mile per hour average exit velocity so far this year.

Vogelbach is in the perfect position to succeed with the Mets as they utilize him as the DH strictly against right-handed pitching. While that means he is in a platoon, it is the strong side of said platoon so Vogelbach should still get his share of at bats. After going deep on Thursday, all 14 of his home runs this season have come against right-handed pitching against whom he was hitting .270 against. Vogelbach should be in a solid position to succeed in the power department while also coming through with a solid batting average and on base percentage as he knows how to draw a walk.

We are very much at the point in the season where fantasy managers make decisions about chasing wins and strikeouts. This firmly puts an emphasis on those pitchers taking the mound twice in a week and that brings us to Lyles. The right-hander is a very interesting option based on his 2.68 home ERA compared to his 5.70 mark on the road. It has become quite clear that there is an advantage for pitchers in Camden Yards and Lyles gets to take advantage of that in one of his two starts this week. He has alternated good months with bad, and Lyles had a 3.58 ERA in July and also got off to a good start in August allowing one run in 6.1 innings. There are worse pitchers to target this week and Lyles’ 7.51 strikeouts per nine innings does help in a week in which he should log around 12 to 14 innings.

After allowing 19 earned runs in 13.1 innings to begin the season, Bubic has been fighting an uphill battle in the ERA department. In his next 67 innings, the left-hander has allowed just 28 earned runs as he has appeared to find his footing. Over 35.2 innings in July, Bubic had a solid 3.28 ERA with opposing hitters batting just .231 against him. Just like Lyles, Bubic takes the mound twice this week, and if you want to really lean into the theme, he also has struck out 7.51 batters per nine innings. While hunting for innings, Bubic is a solid option worth a look.

What we saw out of Cabrera heading into Friday’s start this season certainly was worthy of a closer look; a 3.45 ERA, 1.21 WHIP, and 15 strikeouts in 15.2 innings while picking up two victories. The right-hander was then forced out of action with elbow tendonitis before making his return against the Cubs. Cabrera has also made six starts in Triple-A this season (3.77 ERA and 12.24 strikeouts per nine innings) and he certainly arrives with prospect tools and pedigree. All Cabrera did in his return was throw five hitless innings against the Cubs while walking three and striking out eight to burst right back onto our radars. While we cannot expect that level of success in each start, there is something to be found here over the last two months of the season.

After returning from Tommy John surgery, Hernandez has jumped right into the back end of the bullpen for Texas. The left-handed has picked up two saves this week and has a 2.57 ERA through seven innings while striking out seven batters. While it is a small sample size, Hernandez has looked strong in his return, and right now, with the ninth inning belonging to him, it is worth a serious look.

We know that the Mariners’ bullpen is all over the place, and Munoz picked up the save against the Yankees earlier this week with Paul Sewald pitching in the seventh inning. It was just the second save of the year for Munoz, but his 62 strikeouts in 41.2 innings certainly are impressive. While Munoz has a solid 3.02 ERA, it is his 2.15 xERA that is even more attention garnering which makes him an asset to your pitching staff even without much in the save department.