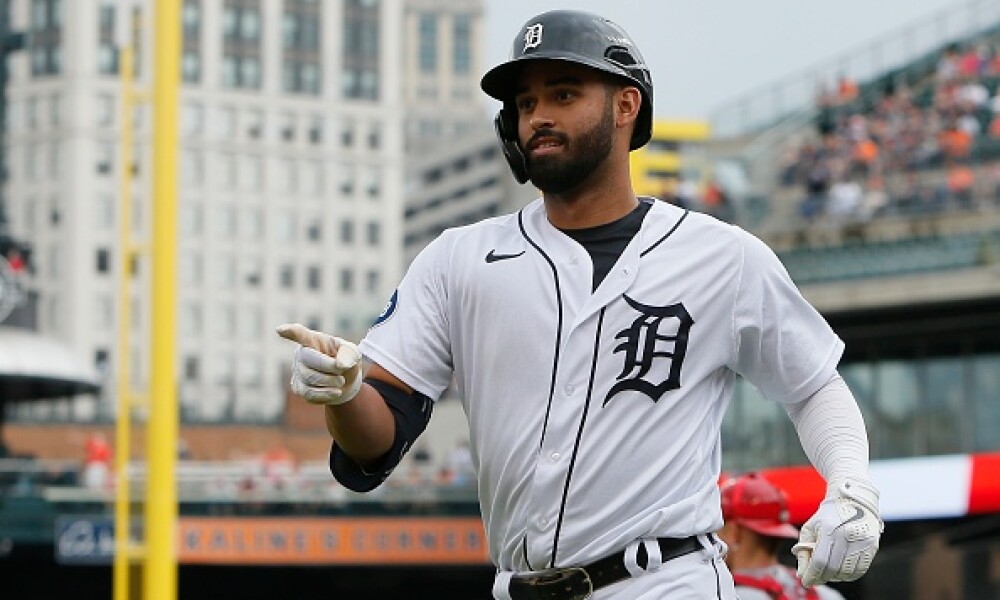 Another week is upon us, so that means it is time to mine the fantasy baseball waiver wire for value once again. As you head out to the MLB waiver wire, here are some players that should be on your radar as they have moved up the fantasy baseball rankings. There is no point in burying the lead as Riley Greene is going to on everyone’s radar this weekend.

Riley Greene would have, and should have, been with Detroit sooner (perhaps Opening Day) had he not been injured in Spring Training. The Tigers are all set to promote Greene on Saturday and we know that he is going right into their lineup and will get regular playing time. In 15 games in Triple-A this season, Greene hit .274 but it’s 2021 performance that we are really after with 24 home runs and 84 RBI in Double-A and Triple-A in 124 games.

Things have not gone according to plan for Yuli Gurriel this season and it’s been fair to wonder whether his days of fantasy relevance would be coming to a close. Due to lack of options, the Astros have stuck with Gurriel to this point as it hasn’t actually held them back, but Gurriel has been picking up the pace as of late. Gurriel has hits in seven of his last eight games and that includes home runs in back-to-back games and three hits on Friday. He is still hitting just .229 on the season with five home runs and 18 RBI, but there is a track record there for Gurriel in a strong lineup and things are trending in the right direction.

Jonah Heim went deep for the eighth time this season on Friday and the catcher has carved out a solid role with Texas. Through 130 plate appearances so far this year, Heim has found success with 25 RBI and a .250 batting average, and while he doesn’t play every day, he does play most games. There is enough here (especially at the catcher position) and he usually finds himself in the middle of Texas’ batting order. With an 18.2-degree launch angle, we can clearly see the focal point of Heim’s game, but things are working for him.

The main factor with Garrett Cooper so far this season has been that he has stayed healthy which means he has stayed in the lineup. That is a good thing as Cooper has been on top of his game this season hitting .311 with a .382 on base percentage through 54 games (220 plate appearances). With a career .369 BABIP, it shouldn’t come as that much of a surprise that Cooper is at a .397 mark so far this season. Cooper isn’t going to bring a tremendous amount power (four home runs and 28 RBI) to the table but that works when coupled with the batting average and he sports a solid 10.3% barrel-rate this year.

Alex Kirilloff has long been an intriguing young bat and he is someone I was high on heading into this season based on his plate tools. Since he is being mentioned as a waiver wire addition, it’s clear that things haven’t gone according to plan for Kirilloff as he hit just .172 in 10 games with the Twins so far this year. Kirilloff didn’t manage to drive in a run and then spent time both on the Injured List and in Triple-A. Based on Kirilloff’s performance in 35 minor league games, it shouldn’t come as a surprise that he finds himself being promoted once again. Kirilloff hit .359 with 10 home runs and 32 RBI so it is well worth it to see if he can continue the success.

We get two starts out of Reid Detmers this week, and the left-hander begins the week with a favorable matchup against the Royals before taking on Seattle. Granted he has only pitched 12.1 innings in his last three starts, but Detmers does have a 2.92 ERA over that stretch. Considering the fact that Detmers is only striking out 6.45 batters per nine innings, it is a good sign that he has a BABIP of just .199 but that is also responsible for the discrepancy between his 4.25 ERA and 5.16 FIP. Making two starts helps with the strikeout totals for Detmers this week and he has proven to be a solid option this year.

After scuffling through last season and positing a 5.78 ERA in 32 starts, you certainly are forgiven for being wary of Zach Davies but things are going quite differently this year. Through 13 starts this year, the right-hander has posted a 3.78 ERA and that is also supported by a 3.58 xERA. Davies has 7.43 strikeouts per nine innings so far this year and opposing hitters have a barrel-rate of just 6.9% with an average exit velocity of only 85.8 miles per hour along with a minimal hard-hit rate at 30.9%. This week we get two starts from Davies against San Diego and then in a favorable matchup with the Tigers.

With Corey Knebel battling both ineffectiveness and a shoulder injury, it is no surprise that the surging Phillies announced he will be vacating the closer’s job for at least the time being. Brad Hand has been quite effective to this point for Philadelphia and the left-hander also has a solid track record, including two consecutive years of at least 30 saves (2018 and 2019), so we know that he is quite capable. The southpaw picked up his second save of the year on Friday while bringing his ERA down to 1.86 on the season. We do have to tread carefully here as Hand has had some struggles in recent years and has a 3.14 FIP and 4.56 xFIP as his 5.12 walks per nine innings don’t do his many favors. Hand does strike out more than a batter per inning and the good news is that opposing hitters only have two barreled balls against him.

Yes, there is quite the Phillies slant here and Hand did pitch the ninth while Seranthony Domínguez got the eighth on Friday, but the latter is the better pitcher. Dominguez hasn’t picked up a save since he recorded 16 in 2018, but I’m not sure I would read too much into him getting the eighth inning as it was the heart of the order for Washington. The right-hander has a 1.80 ERA (1.90 FIP) while striking out 12.24 batters per nine innings and walking just 2.52 and sporting a 50% groundball rate. He is bound to get saves with Knebel out of the role, and at the very least, there is value in everything else we get out of Dominguez.

The closer situation in Seattle has been all over the place this season, and the fact that Ken Giles is on his way back will be helpful. Giles is in the midst of a rehab stint in Triple-A, and we should see him shortly in the Mariners bullpen. He likely won’t slot right back into the closer’s role but I expect him to be in line for saves this season, and potentially pretty quickly. Giles has had clear success in the role previously and we know he can strike batters out, so if there is room on your bench and you are looking for bullpen help (who isn’t), then I would look to add Giles before his cost increases.