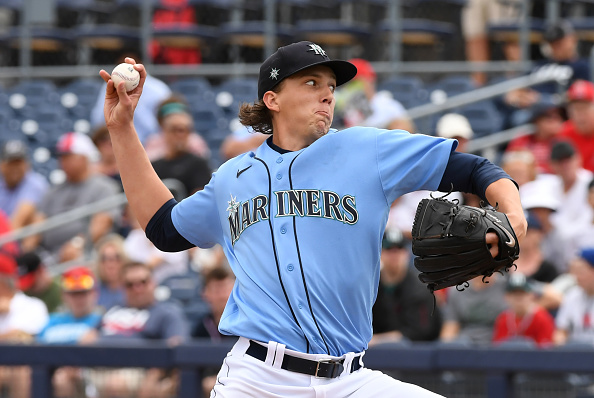 Jarred Kelenic (SEA) – If you missed Sunday’s waiver wire article it featured an update Tuesday morning. Kelenic’s ownership is spiking so jump on board while you can. Jen Piacenti noted in this week’s All About The Curve  how pitchers have been the bread & butter of the fantasy season so far and how a lot of elite hitters are struggling right now. I tend to agree with that sentiment (hard to argue with it, really) and because of that, Kelenic enters as a top 25-30 outfielder. He offers elite power and speed so you need to grab him in any league he may still be available. He will make his MLB debut Thursday.

Nick Senzel (CIN) – We could be watching something pretty awesome happening with Senzel. He went 0-for-5 on Wednesday but prior to that he had 14 hits since April 28th. Once a top prospect in baseball, he struggled with injuries and wasn’t adjusting to the big league level that well. The slugging percentage and OPS won’t jump off the page, but his strikeout numbers are way down from the last two years and he still isn’t even 26. He’s hitting line drives at a solid 25% clip and better days could be ahead regarding the power once it warms up in Cincinnati.

Brandon Belt (SF) – If you need a quick replacement for C.J. Cron or maybe even Eric Hosmer , Belt can fill in just fine. He’s only hitting .232 on the year entering Wednesday, but he’s been flashing the power lately with four home runs since May 4th, bringing his total to eight on the year and he’s comfortably locked into the heart of the Giants order. The strikeouts are a bit of an eyesore. 31.7% is by far the worst strikeout rate of his career so I expect him to regress to his career average of about 23% and he can draw enough walks to make him a useful grab in points leagues.

Miguel Rojas (MIA) – Rojas hits atop the order for the Marlins and while he doesn’t rip a ton of dingers, he still has 14 extra base hits, ten of which are doubles. So that kind of explains his .817 OPS entering Wednesday. He scored a run early Wednesday night bringing his season total to 24 runs and he has three steals on the year. Don’t be too discouraged by that number, keep in mind if he’s hitting doubles and triples (he has two on the year) then there’s no opportunity for him to steal bases. His ownership is steadily rising but he’s still a pretty well-kept secret available in shallow leagues.

Robbie Grossman (DET) – Grossman doesn’t tout the best batting average (.233) but he walks enough to provide a decent OBP of .381 and he has stolen base upside. He regularly hits leadoff which means he can also provide runs and as of this writing he’s a perfect 7-for-7 on stolen base attempts this season. This is a pretty solid add in deeper leagues if you need outfield help.

Logan Gilbert (SEA) – In an attempt to steal Jarred Kelenic’s thunder, Logan Gilbert will also make his MLB debut on Thursday. Gilbert is the Mariners’ top pitching prospect and arguably a top 40 prospect across the league. Stetson University has produced some decent pitchers in recent memory like Jacob deGrom and Corey Kluber . Ever heard of ‘em? Gilbert’s an imposing figure on the mound standing at 6’6” and he offers a strong 97mph fastball but he can dial it back a little bit if he seeks command over power. Apparently, he also offers a pretty fierce slider as well and with any of his four-pitch arsenal he manages to miss bats. Gilbert’s a must add in any format. He probably doesn’t have an incredibly long leash so I’m not expecting a deep start on Thursday, but it’s an exciting time for Seattle as they call up Gilbert and Kelenic for their debuts on the same day. Maybe we should start talking Julio Rodríguez’s debut into existence.

Yusei Kikuchi (SEA) – I just wish we could get the slightest semblance of consistency out of him. He’s averaging a strikeout per inning and boasts a 2.66 BB/9. But home runs have been an issue. So for all the negatives, in six of his seven starts he’s lasted at least six innings and he has five quality starts despite a 1-2 record. So, volume is certainly there for him and he’s been an innings eater. He faces the Tigers this coming Monday so he’s already an intriguing grab for the coming week’s scoring period and he might be a two-start pitcher next week, but I’ll let Ivar Anderson confirm that later this weekend when his Two-Start Pitchers article drops.

Adbert Alzolay (CHC) – Alzolay features some of the same downfalls that were touched upon with Yusei Kikuchi . He’s averaging over a strikeout per inning, hasn’t given up many walks, and he has allowed a few too many home runs. He does have a 4.50 ERA, but we might get some positive regression considering his 4.13 FIP and 3.39 xFIP. He lines up as a two-start pitcher next week against the Nationals and Cardinals so definitely give him a look especially in ESPN leagues where he’s available in about 80% of leagues.

Framber Valdez (HOU) – I try to throw in Framber Valdez every two-to-three weeks just to reiterate that he’s on the waiver wire and we saw plenty of fantasy owners jump ship to start the year following his finger injury. He threw a 20-pitch bullpen session last week and is in line for another in the coming days. After a rehab start or two it’s possible that he could make his return to the rotation sometime in June. He was a top 30-40 starting pitcher a year ago so that arguably makes him a must own if he returns to that form.

Jake Diekman (OAK) – Something curious is happening in Oakland regarding the bullpen situation. I mentioned on Sunday that he was a good player to target if looking for holds with the occasional save. However, he’s gone out this week and recorded back-to-back saves on Tuesday and Wednesday, and on Wednesday it was actually Lou Trivino who was brought in for the hold opportunity in the eighth inning. To put this under a microscope it looks like the A’s trusted Trivino more against the heart of the Red Sox order while Diekman came in to face the bottom third of the Boston lineup in the ninth inning. Now it’s looking more like a shared closer job at the moment between the two so keep an eye on it for now and consider picking Diekman up if he’s floating on waivers still.

Jordan Romano (TOR) – Romano logged his first save of the season on Tuesday night, but again it wasn’t a flawless victory to put it in Mortal Kombat terms. He needed 29 pitches in one inning of work, he faced five batters, gave up a hit and a walk, but came away unscathed in the winning effort. Because of the heavy pitch count he wasn’t brought in for the save last night. Like I said on Sunday, this is a good player to grab for saves in the short-term but he probably doesn’t stick when Rafael Dolis is ready to return.

Pete Fairbanks (TB) – If I’m being honest there are serious concerns with Fairbanks. He missed about a month, but he has four holds in five appearances on the season so they trust him in high leverage situation. But I don’t love the .414 BABIP or 5.41 xFIP. He hasn’t even pitched five innings on the season but the batted ball data (41.7% hard hit rate and 66.7% fly ball rate) suggest he’s due to give up the long ball. However, that’s simply a byproduct of him being a hard thrower, and again he missed a month so the sample size is still very small. What I do like is that he’s a strikeout machine, but he’s also prone to giving up free passes. I could’ve stopped writing after mentioning Romano but wanted to get a third reliever in here so maybe I’m forcing Fairbanks down your throat. But Tampa likes using him in high leverage spots and if the batted ball data levels out then I’ll feel better about him.