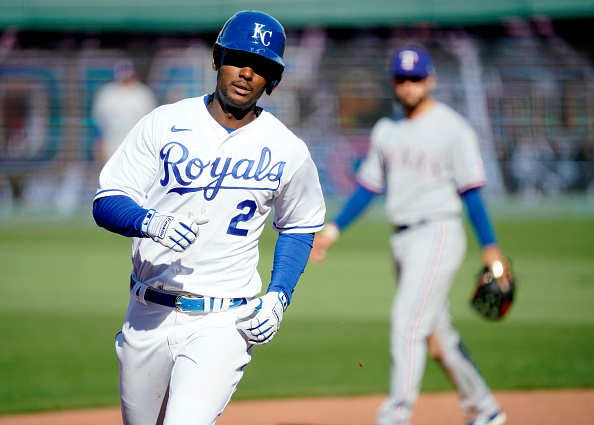 Raimel Tapia (COL) I can’t say I’m a huge fan of Tapia, especially in points leagues where he strikes out much more than he walks, and he just hasn’t showcased a ton of power. However, something can be said for a guy hitting leadoff in Coors Field, which we have seen early on in the season. If he’s hitting at the top of the order regularly then he will lend himself to more run scoring opportunities and potentially stolen bases as he’s averaged a swipe every 11-12 games over the last two seasons. He hit .275 in 2019 and .321 last year during the shortened season. Even if he’s closer to his 2019 average he can still provide production for your fantasy team, but I prefer him in rotisserie or head-to-head category formats.

Michael Taylor (KC) So I do a NASCAR podcast with Matt Selz and not once did he ever express his affinity for Taylor this year. Am I bitter? Not quite, because I was still able to get in while the gettin’ is good and grabbed him in a couple leagues, but I won’t be filling Matt in on my love for Joey Bart anytime soon. In Thursday’s opener he went 3-for-5 with a dinger and three RBI. On Saturday he followed that up with a 2-for-4 performance with another home run and three RBI. Could it just be a hot start? Yep, certainly could be. And for someone who tries to be conservative and exorcise patience to start the year, I get why some may temper expectations. But I’m taking a shot on him in some leagues to see if this could be a legitimate breakout for him. Join me?

Rowdy Tellez (TOR) I don’t love Tellez long-term but I do like the potential upside this week. Toronto has seven games in the upcoming week and Tellez could arguably find his way into the lineup against six RHP’s next week. We’ve watched the Royals run up the score on the Rangers early on this year and we know the Blue Jays have the power bats to do the same thing. Mike Foltynewicz , Dane Dunning , and Kyle Gibson are all righties. We’d like to see Tellez get into at least two games there. Then Toronto gets a four-game series against the Angels and while he probably sits against Andrew Heaney , we could see Tellez get a start against Dylan Bundy , Alex Cobb , and Shohei Ohtani . Again, it’s early in the year and I don’t like looking at small sample sizes too closely. But Tellez has a platoon advantage this coming week that has a chance to pay off if he finds his way into the lineup.

Kyle Isbel (KC) We have to give some recognition to Isbel who, through two games, has made the most filling in for Adalberto Mondesi . On Thursday he went 3-for-5 with a pair of RBI and a run scored. On Saturday he followed that up by going 2-for-4 with a triple, two runs scored, and another RBI. When Mondesi’s ready to return it’ll be interesting to see what Kansas City does with Isbel. But we’re only two games into the season and we obviously need to see some more from him. But the Royals have posted 25 runs in two games and that should perk up our ears. His teammate, Michael Taylor, is easily the safer addition, but at the very least Isbel should be a player we monitor for the next week or so.

Yusei Kikuchi (SEA) Kikuchi lengthened his leash for fantasy purposes on Friday. Against the Giants (not the greatest competition), he tossed 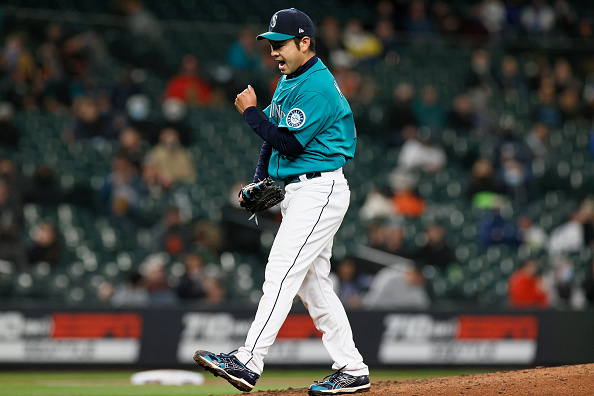 six innings of three-run ball with just one walk and a stellar TEN strikeouts. He threw 89 pitches (67 strikes, 11 swinging) and looked pretty darn good. I suppose all that jargon we were hearing in spring training regarding his new pitch selection was fairly accurate, but let’s not overreact to one outing. He’ll certainly be in play as a streamer next week against the Twins. Unfortunately, the six-man rotation means he’ll miss the Orioles and likely line up his following start against Houston. Take it one start at a time and see if this new repertoire shakes out. Kikuchi’s teammate, Chris Flexen , might be worth a speculative add as well. He comes over from the KBO and looked pretty good in his debut Saturday against San Francisco. The competition won’t always be as lowly as the Giants, but Flexen tossed five scoreless innings and racked up six strikeouts and just two walks. Similar to Kikuchi he does not draw the Orioles coming up and instead will toe the rubber against Minnesota and Houston in the not-too-distant future.

Carlos Rodón (CHW) I’ve fielded a few questions regarding Rodon the last couple days in the MLB Seasonal Chat. He’s personally not a guy I’m incredibly high on. He’s hurt me more than he’s ever helped me in his career. However, in reading Ivar’s Two-Start Pitchers/Streaming Pitchers article, he makes some good points in adding Rodon for the upcoming week. The two starts come against the Mariners and the Royals. Now I know I’ve mentioned two Royals hitters as waiver claims, but part of me wonders if their offensive explosion early on was simply due to the fact they were playing the Rangers. Rodon’s improved his spin rate and might be able to help us next week in fantasy.

Jordan Montgomery (NYY) He’s likely only available in more shallow leagues, but he’s arguably one of the best streamers in the upcoming week as he’ll take the mound against the Orioles on Monday and then the Rays on Sunday. The Orioles took the series against Boston, but we all have more faith in the Yankees to provide run support than Boston at this point so that’s an opportunity for Montgomery to get a win. The Rays just took two-out-of-three against Miami, but I haven’t been blown away by the Rays offense so far. They posted just one run on Thursday and four of their six runs on Friday came in the ninth inning. Saturday they put up seven in a losing effort, but I think this is a spot we can utilize Montgomery in both matchups. Plus, the game against the Rays will be in Tropicana Field so that’s a ballpark upgrade for him next Sunday.

I don’t think I need to re-hash anyone from Wednesday’s article. Daniel Bard and Jake McGee are still the options I’d prefer over the players I mention below because their roles seem pretty defined. So, while I prefer those names, for the sake of not sounding like a broken record I just don’t see the point in writing a paragraph on either play. But if they’re available, they should be grabbed.

Mark Melancon (SD) I’m approaching this with a little trepidation. For starters, the Padres did little to inform fans and fantasy baseball players who they were leaning on to close out games. Mark Melancon . As of this writing (late Saturday afternoon), we’ve seen two games from the SoCal Friars and Melancon has closed out both to get the save. If this trend continues then you won’t be able to grab him in a week or two and his ownership is already on the rise. Emilio Pagán and Drew Pomeranz are at the ready in the event Melancon struggles. So, while my confidence in him is growing to the level it’s at for Bard and McGee, the competition in San Diego is more stiff.

Diego Castillo (TB) I had a long talk with a sub in the chat on Saturday about Castillo. Castillo, like Melancon, has two saves in two games. It’s worth pointing out that Friday’s game was not a save situation until the Rays offense made it one in the ninth inning after they scored four runs on last week’s waiver mention, Anthony Bass , to take a 6-4 lead. I don’t have as much confidence in Castillo as I do Melancon simply because we know Kevin Cash’s track history. We could still see the Rays take a committee approach with this bullpen. Is he a good speculative add if you have an available roster spot or a clear-cut drop this early in the season? Sure. But I’m erring on the side of caution here.