Fantasy Baseball September 7 Round Up: Christian Yelich Hit a Moonshot 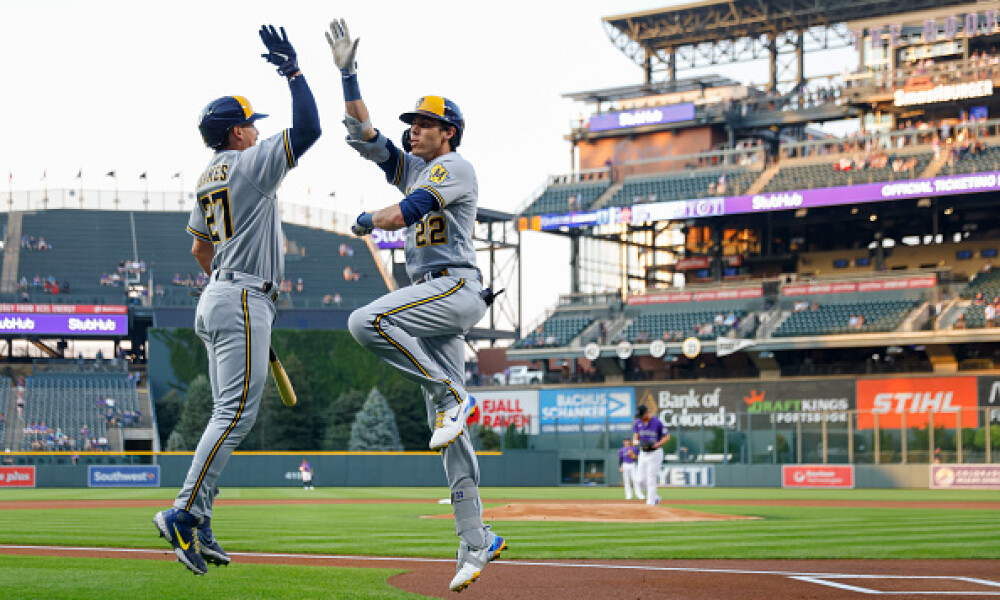 Tuesday’s fantasy baseball action was highlighted by the longest home run of the season hit at – Surprise! – Coors Field. Elsewhere, O’Neill Cruz is beginning to look like a superstar, Matt Olson powers the Braves into first place, and Framber Valdez continues his historic quality start streak.

Oneil Cruz is Heating Up

Against the New York Mets on Tuesday, Oneil Cruz launched a monster home run into the Allegheny River, which helped cap a fantasy-friendly 3-for-5 night with a homer, a double, two runs, and two RBI. In a season where Cruz has shown his uncanny strength in hitting the ball, this bomb stands above the rest.

It almost looks like he golf-swings that ball out of the ballpark, and the power behind his bat just kept it going clear out of the park. After a rough stretch, Cruz now has six hits and two home runs in his last three games and is starting to peak at the right time to help in the fantasy playoffs as well as raise his stock for 2023 drafts. This is a player who could easily provide a 30-homer, 15-steal season for managers next year.

While Framber Valdez’s win streak may have been snapped by lack of run support from the Astros, he still spun his 23rd straight quality start against the Texas Rangers on Tuesday. He has the left-handed pitching record for most consecutive QS, and now he has his eyes set on the MLB record.

Valdez did allow four total runs, but the defense behind him didn’t do him any favors, as they allowed two unearned runs to cross the plate, ultimately costing Houston the game. The best part about the streak for fantasy managers has been the increase in strikeouts to go along with the elite ground ball rate. He now has at least eight strikeouts in four of his last five games while only hitting that mark twice before August.

Matt Olson’s batting average may never be at the Freddie Freeman level, but he is doing everything he can to match Freeman’s power and run-producing ability as the new Atlanta Braves’ first baseman. He launched a 3-run homer against Oakland on Tuesday, ultimately helping his team win and take a share of the NL East lead.

Olson is now one extra-base hit shy of 70 for the season, and still has four weeks to go to pad those numbers. He should coast to his second straight 30-homer, 100-RBI season and be an easy top-five first baseman in 2023 fantasy leagues. Still just 28 years old, this looks like a bargain with Olson under contract for seven more seasons.

Max Muncy almost single-handedly led the Dodgers offense to a victory last night against the San Francisco Giants. Muncy went 3-for-4 with two home runs, three runs, and three RBI, easily putting up one of his best games of the year.

It has been an up and down season for Muncy after dealing with elbow injuries before the year. But he now has six hits in his last four games and has ALMOST raised his batting average above the Mendoza line. If he can get his bat clicking ahead of the postseason, this already dangerous team will be downright unbeatable.

I mean, come on Christian Yelich, you couldn’t that ball one more foot to get to 500? Yelich’s moonshot in Colorado last night was ultimately not enough for the fledgling Brewers to secure a win, but it set all kinds of records for both the 2022 season and the history of Coors Field.

Before last night, the longest home run of the 2022 season was 496 feet. It’s clear after the past three seasons that the 44 home runs from Yelich in 2019 were very fluky, and he is going to be a higher average, OBP, and stolen base asset for the balance of his career. But this is a reminder that there is some massive power always lurking inside that bat.

With a couple of Cleveland Guardians pitchers going on the IL recently, maybe they should just consider pitching Shane Bieber every other day if they want to clinch a playoff spot. He shut down the Royals on Tuesday, pitching eight innings and allowed just one run with seven strikeouts.

Bieber has allowed more than two earned runs just once since July 24th and now has an ERA under 3.00 (officially 2.96) and a strikeout rate that is up to 26% on the year. He and Triston McKenzie will make for a formidable duo in the postseason if they can just hold off the charge from the Twins and White Sox.

Max Scherzer is Back on the IL with an Oblique Issue

For the second time this season, Max Scherzer will go back on the IL with an oblique issue. He already had one IL stint this year that caused him to miss seven weeks, but the Mets don’t seem to think this one will end up with a lengthy IL stint. The hope is he will miss only one or two starts.

Congratulations to the Rasmussen family as Drew and his wife welcomed their first child, which caused Rasmussen to be scratched from his scheduled start on Tuesday night. Rasmussen was placed on the Paternity List, which means he is likely to miss 2-3 days and then make his next start when he returns.

Anthony Rizzo has been missing in action the last few games for the Yankees. It stems from headaches he has been having since he received an epidural to help with lingering back pain this season. The migraine headaches have gotten so bad, however, that the Yankees have placed their star first baseman on the 10-day IL. It’s another blow for a team already dealing with injuries to DJ LeMahieu and Andrew Benintendi.

Chicago Cubs’ catcher Willson Contreras has been one of the two of three most valuable catchers in fantasy this season, hitting 21 home runs with four steals and a respectable .246 average. Those numbers will take a pause as Contreras was forced to the IL with an ankle injury first suffered in the Field of Dreams game on August 11th. The Cubs are not mathematically eliminated from the postseason, but now 17 games out of the Wild Card, Chicago can pull out the white flag for players they don’t want to risk for next year.