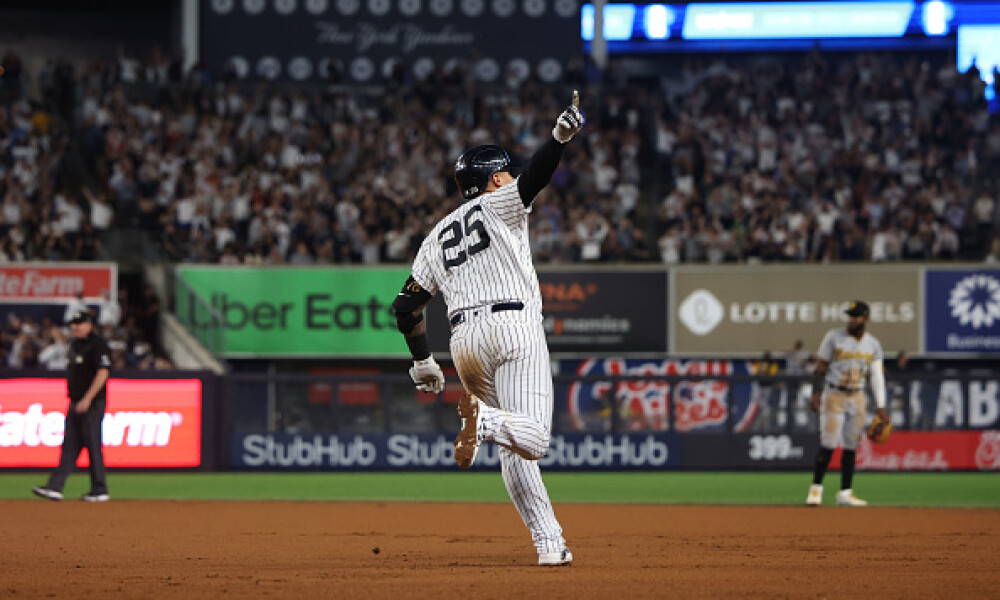 Well, we are still on milestone watch, as Aaron Judge is one homer away from 61 on the year, and Albert Pujols is two away from 700 career home runs. However, along with the pursuit of the home run record, Aaron Judge looks poised to win the American League triple crown, which would only strengthen an already strong case for the Most Valuable Player award. Outside of these two historic milestones, we get some interesting prospect news out of Seattle and Colorado with Jarred Kelenic and Ezequiel Tovar, and Kansas City seeks for a fresh start after firing Dayton Moore. Gleyber Torres and Steven Kwan had big days yesterday, and the latter now has multiple hits in five straight games. I’ll also give you my best bet for Thursday’s Major League Baseball action after recapping all of the fantasy baseball news and notes from Wednesday.

Overall, Gleyber Torres went 3-for-4 with two home runs, five RBI, four runs scored and a walk, but the more noticeable factoid is that both of his home runs came in New York’s eight run eighth inning! Aaron Judge may not have hit number 61 yesterday, but Gleyber is up to 23 home runs on the year, and Torres is slashing .419/.471/.710 over his last seven games.

In fact, Torres is rocking a 10-game hit streak, and he’s hit safely in all but three September games.

He’s baaaack! Kwan has multiple hits in five straight games, during which he’s hit .538 with one home run, four RBI, and two stolen bases. Overall, he’s hitting .314 with a .363 wOBA and 140 wRC+ in the month of September. The Cleveland outfielder is up to five home runs and 17 stolen bases on the year to go with a .298 average, .375 OBP, and .394 SLG. At least right now, he’s showing no signs of slowing down and he’s in line for another good day on Thursday against Johnny Cueto. He’s 3-for-8 in his career against Cueto and he’s hit right-handed pitchers at a .303 clip this season,

Jarred Kelenic Back with Seattle

The beginning of Kelenic’s career hasn’t gone according to plan, and that might be an understatement. However, the Mariners have brought him back up to the big league club, hoping he can make a splash down the stretch. He’s been quite good in the PCL this year, hitting 18 home runs with 32 doubles, nine stolen bases, and a .295/.365/.557 slash line across 86 games. The strikeouts have been in check at Triple-A, which is a great sign considering they got out of hand in the big leagues (30.6% across 450 ABs).

However, will he play everyday? Will he play at all? If so, in what capacity? While I don’t know for sure, I’m rather certain we won’t see him much, if at all, whenever a left-hander is on the mound for the opposition. Regardless, what a story it would be for him to go absolutely bonkers down the stretch.

Ezequiel Tovar Gets the Call in Colorado

There’s no denying the talent with Tovar, as he is a top-30 prospect in Major League Baseball. Now, while Coors Field is a great hitter’s park, just be careful with your expectations the rest of the way. He never played above High-A ball prior to this year, and while he has been quite good, the 21-year-old has just 285 at-bats above High-A. He logged 264 at-bats at Double-A this year, posting a .318/.386/.545 slash with 13 home runs and 17 stolen bases. Then, five games at Triple-A, he was great, and now will join the Rockies.

Again, temper your expectations because he’s young and still quite raw, but in terms of pure talent, he has all the tools. I’d still add him in most fantasy baseball leagues, but there could be some struggles early on as he gets acclimated to the game’s highest levels.

Not one, not two, not three, but four pitchers recorded double-digit strikeouts in their starts yesterday. Blake Snell and Triston McKenzie led the way with 13 strikeouts, while Jesús Luzardo racked up 11, and Roansy Contreras struck out 10 Yankees in just 4.2 innings of work. If we drop the threshold a bit, Kevin Gausman, Lance McCullers Jr., and Dane Dunning all struck out eight, while Robbie Ray and Marcus Stroman each had seven. We almost had double-digit pitchers yesterday with seven or more strikeouts! What a day for pitchers it was!

What a day for Vierling! It was a night of “fives” for Philadelphia, in that they had a five-game losing streak coming into this game, and Vierling’s fifth hit of the night was the most important one. He’s now hitting .306 in the month of September, but when you look at his last 11 games, he’s slashing .378/.368/.459 with three doubles, five runs scored, and four RBI. With the way he’s playing, Philadelphia has no choice but to keep his bat in the lineup, even if Vierling’s bat lacks pop, and if your fantasy baseball league allows for daily moves, don’t rule out Vierling’s .724 OPS against lefties, especially with the way he’s hitting right now.

The Athletics have the second-highest strikeout rate against right-handed pitching over the last two weeks, not to mention the fourth-lowest batting average, seventh-lowest OBP, and fifth-lowest OPS. Oakland’s Adrian Martinez has a 6.38 ERA at home this season, and Kirby has been too damn good of late. Take Seattle tonight, and don’t look back.