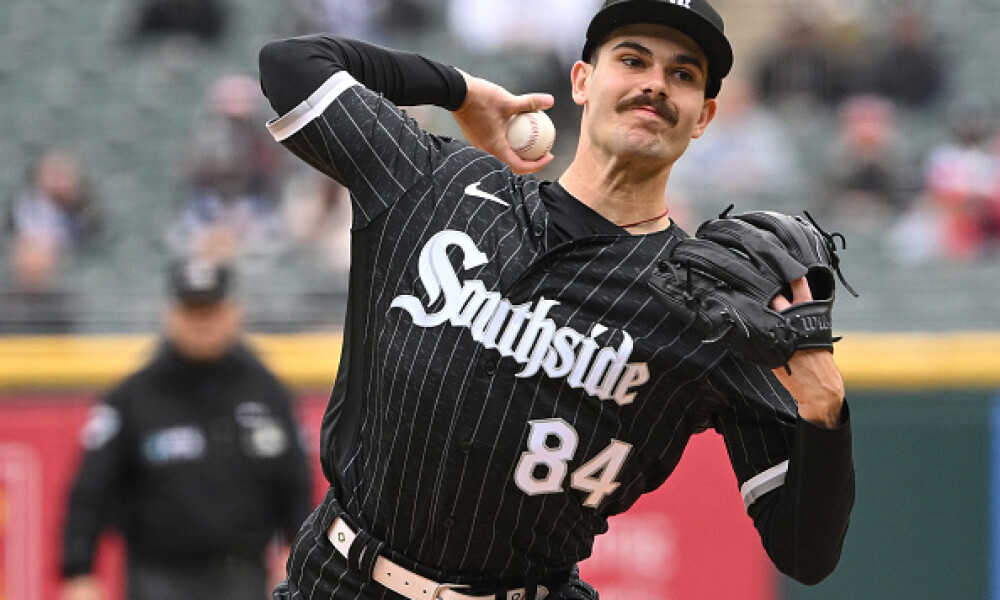 How is your 2022 fantasy baseball season going? Are your players climbing up the fantasy baseball rankings? Do they play every day or are they out of the MLB daily lineups a few times each week? Did you over-invest in Cincinnati Reds, the team with the worst MLB record ever, or do you have guys who are exceeding expectations like Ty France or others on the Seattle Mariners roster? As you’re scrolling through the latest fantasy baseball news, these are the questions you need to routinely ask yourself. Every day, just as you would check the MLB weather and MLB lineups for setting MLB daily fantasy baseball (DFS) lineups, you should be evaluating your seasonal fantasy team, making sure you are maximizing value and checking your fantasy baseball waiver wire each day. It takes some time to develop a routine, but once you do, you’ll start to see the results in your league’s standings.

Now let’s check in with what happened around MLB on Monday.

While it’s not exactly a victory lap here just five starts into the 2022 MLB season, I can’t help but share my enthusiasm regarding the 26-year-old right-hander’s start to the year. He was absolutely electric Monday when he limited the Angels to just one hit over seven innings while striking out a season-high 11 batters. That drops his ERA to 2.48 on the season while also pushing his WHIP down to 0.93. Oh yeah, and don’t forget the 39 strikeouts over just 29 innings of work. I spent the entire offseason talking up Cease and while I fully supported Lucas Giolito as a Cy Young candidate, Cease was the guy I expected to take the bigger step forward. His command of his secondary offerings has been on-point and he’s mixing things up beautifully as he keeps hitters off-balance. I mean, how do you stand there at the plate and go from a 97-mph fastball that elevates to an 80-mph knuckle curve where the bottom drops out the moment it nears the plate? This guy’s stuff is downright filthy.

Wander Franco Resumes His Quest for a Batting Title

Obviously, it’s early in the season, but if you’ve listened to Jim Bowden both on SiriusXM Fantasy Sports Radio as well as the Front Office Insights we had in our Fantasy Baseball Draft Guide, he said Franco was a guy who was more than capable of winning a batting title as early as this season. The 21-year-old shortstop phenom missed Sunday’s game with hamstring tightness, but bounced back in style Monday with yet another multi-hit game. He’s now slashing .322/.341/.575 on the season with four home runs, 14 RBI and three stolen bases. Don’t look for the big power from him as that’s really not his game. But you can expect him to stuff the stat sheet everywhere else while giving you a major boost in the batting average department.

Zac Gallen Picks Up His First Win of 2022

Coming into Monday’s showdown with Pablo López and the Miami Marlins, Gallen was sporting a 0.60 ERA with a 0.67 WHIP and 14 strikeouts over 15 innings (three starts). You would think he’d have a win under his belt, right? Well, these are the Arizona Diamondbacks and they do not, typically, score many runs. Until now! As Gallen limited the Fish to just two runs on five hits with no walks and five strikeouts over six innings, the Diamondbacks chased Lopez in the fifth inning with four runs and a nice, early lead. The bullpen almost blew it, but we can lament over the Arizona relievers another time. The focus here is Gallen and his ability to dominate on the mound. We were in on him last year but a forearm injury threw a monkey wrench into those plans. His draft value was low so we took advantage of the bargain and here we sit. We cannot expect a string win-total from him given his team, but he can certainly help us everywhere else. If you don’t roster him, keep tabs on him. His name just might pop in your fantasy baseball trade analyzer.

It is very easy to get swept up in a performance like we saw from Torres yesterday as he smacked a two-run homer in the fourth inning and then hit what turned out to be a game-winning RBI single in the ninth to give the New York Yankees their 10th-straight victory. One game does not a comeback make, so don’t go overreacting just yet. Yes, he once clubbed 30 homers in a season. Yes, he plays for the Yankees. But I’m not going to flip out just yet. He is 9-for-27 with two home runs and 10 RBI over his last eight, but can he sustain it beyond his team’s winning streak? If he’s on your roster, great, but people are going to treat him like a sell high candidate right now and take advantage. Watch for a little while longer.

Fantasy Baseball Closers for the Day

Ian Kennedy of the Diamondbacks is now 2-for-2 in save chances with Mark Melancon on the shelf. He should continue to get the work here in the short-term.

The Astros used Héctor Neris in the eighth inning once again, showing their preference for him in more high-leverage spots. Rafael Montero picked up the save Monday, so he might be worth th look until Ryan Pressly finishes his rehab assignment.

It was Jhoan Duran in the ninth for the Twins on Monday which puts fantasy owners of Emilio Pagán in a tough spot. Pagan had notched two saves in back-to-back outings, but then blew a lead in the eighth against the Tigers last week. The job seems to be up in the air for now, so keep watching and hold both if you can. Manager Rocco Baldelli usually likes to stay with one guy so this shifting could just be him feeling things out before committing.

After serving as a pinch-hitter for Monday’s game, the Angels seem content to let Ohtani stay in the lineup rather than get some extra rest. He was removed from Sunday’s action with groin tightness, but it looks as if the removal was precautionary. He is expected to serve as the Angels designated hitter Tuesday and could start on the mound either Wednesday or Thursday in Fenway Park. Keep an eye on how he looks at the plate and running the bases during Tuesday’s game, but for now it looks like Ohtani, and fantasy owners, have dodged a bullet. In the meantime, Noah Syndergaard, who was scratched Friday with an illness, will take the mound for the Halos on Tuesday.

While there was never any legitimate confirmation that Trivino tested positive or was simply deemed a close-contact, one would think it was the former as he’s been out for a little more than two weeks now. He finally cleared the health and safety protocols and was able to make a rehab appearance at Low-A Stockton on Sunday which seemed to be the final step in his recovery and return to the majors. Trivino should return to the closer’s job, though don’t drop Dany Jiménez just yet as they could use a committee approach to ease Trivino back in. You also never know how he will perform, so just give it a few appearances before casting Jimenez aside.

Finally, right? Pressly has been on the shelf since April 13 when he began to deal with right knee inflammation, so the move to a rehab assignment is a VERY welcomed sight. The team has not said how many rehab appearances they want him to make before returning to Houston, so it would appear that we’ll take things day by day. Look out for reports later in the day Tuesday to see if there were any setbacks or issues and expect the team to lay out a potential game plan once they see him in action. If everything goes well, we could be moving Pressly back into our starting lineups this weekend.

Rockies Do Not Expect Kris Bryant to Return This Weekend

Make sure you’ve got your back-ups in order for just a little while longer as a report from MLB.com says the Colorado Rockies do not expect to activate Bryant from the 10-day injured list on Friday when he is eligible to return. Bryant was seen playing catch the other day, but as of Monday, had not swung a bat at all. As we saw with Christian Yelich’s back last year, things can get a little dicey, so the Rockies are just erring on the side of caution. Sometimes it can be tough for fantasy owners to be patient, but I’d rather see Bryant sit for another week here in May than to lose him for an extended period of time during the warm, summer months when the ball is flying out of Coors Field.

If you listened to the latest episode of the Ante Up podcast with me and Adam Ronis, you would have heard us talking about the Yankees/Blue Jays series and how both of us were into taking the Blue Jays at plus-odds to end the Yankees winning streak. That was after the game had already started and neither of us actually bet it, but the same principle holds here today. We’re not getting plus-odds, but there isn’t a whole lot of juice if you wanted to back Alek Manoah. The 24-year-old held the Yankees scoreless in his first start of the 2022 season and has allowed just four earned runs over 25 innings this year. As a Yankees fan, I love what they are doing and Jameson Taillon is surprising me, but as a bettor, I have to understand that all good things must come to an end.

We also discussed the Reds/Brewers game, but unlike my opinion of betting the Jays against my Yankees, I am going o flip-flop from my thoughts on this battle of two NL Central teams. The Brewers have definitely struggled at the plate this season and they got shut down by the Cubs on Sunday, but prior to that game, Milwaukee won five-straight and averaged more than seven runs per game. You can say that the wins came against bottom-feeders like the Cubs and the Pirates, but what are the Reds then? The team has three wins on the season, a -65 run-differential, Joey Votto looks awful right now and they just lost Jonathan India again. Not to mention how bad Tyler Mahle has looked in his first few starts. There’s no value on the money line, but since the Brew Crew has covered the run line in eight of their last 10 against the NL Central, we’ll side with Brandon Woodruff and their bats.

The White Sox have certainly had their struggles this season as injuries have ravaged the team, but if there’s one thing they do well, it’s hit left-handed pitching. In fact, the South Siders have a .355 wOBA against lefties, third-highest in the league, and a 139 wRC+ against them. The Cubs are throwing Drew Smyly today and after a solid start to the season, he’s now allowed six earned runs over his last nine innings. Not only do I think the White Sox win this game, but I’m also going to double-down on my SXM Pick to Click today which was Tim Anderson.