Fantasy Baseball May 27 Round Up: Is Martin Perez For Real? 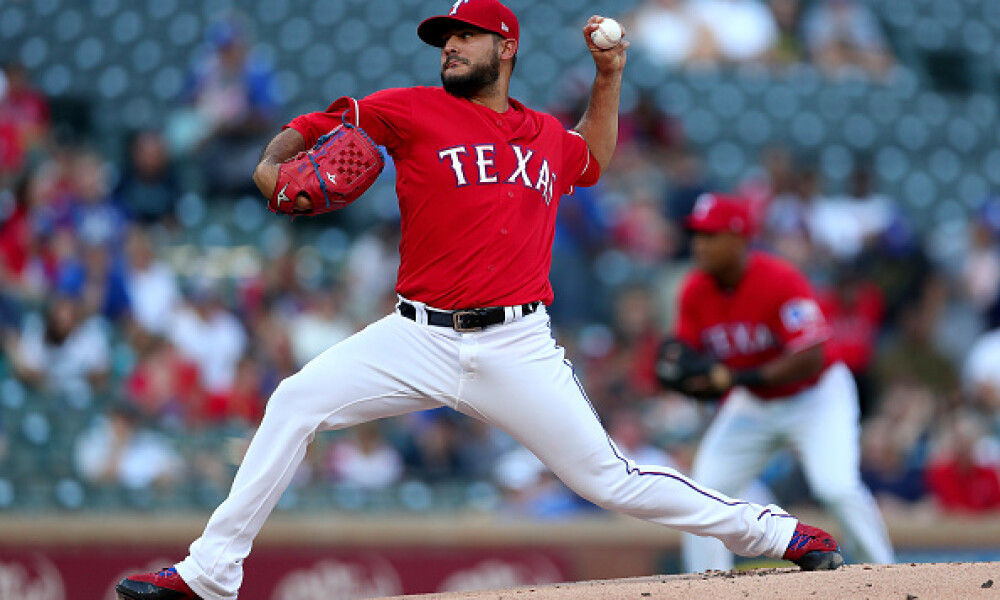 Before we head into the latest fantasy baseball news and today’s MLB best bets, allow me to remind you of some coverage here at Fantasy Alarm. If you are looking for fantasy baseball rest of season rankings, we do things a little differently. Each month, Jim Bowden, Adam Ronis and I each post a new set of monthly player rankings which should help guide you for the 30 or 31 days. Too much happens over the course of even just a week or two that, we believe, you shouldn’t be looking too far ahead. Whether it’s an injury or COVID-19 or even just a hot fantasy baseball prospect like Vinnie Pasquantino getting called up, playing time for anyone can fluctuate, even if it’s a superstar. Imagine trying to predict the future for Bryce Harper and his partially-torn UCL? So, try not to worry too far in advance. Even when talking fantasy baseball trades. Focus more on the now which is easier to “control” than two months from now when it’s anyone’s guess sometimes. Cool? Great. Now let’s get to the action.

Is Martín Pérez for Real?

It’s a legitimate question, right? Anyone who has watched Perez knows hat what we are seeing can’t be real. This guy hasn’t had an ERA below 4.00 since 2013 and has a career mark of 4.56 with a 1.46 WHIP to go with it. So, what the heck is going on here? After yesterday’s seven innings of one-run ball, Perez has now thrown seven-straight quality starts and has a 1.60 ERA with a 0.99 WHIP and 44 strikeouts over 56.1 innings. There is no uptick in velocity at all and the changes to his pitch mix are minimal, with the major difference is that he’s backed off his cutter a little. I’m baffled. Truly. Even the peripherals look normal. I have to believe there’s some serious luck going on with just a .266 BABIP against him, but even that doesn’t really explain what we are seeing. This is simply a ride the wave until it breaks situation. He’s faced both strong and soft MLB lineups this season, so I can’t even say the opposition is the answer. Either way, he’s got Tampa Bay for his next start and they have just a .296 wOBA against lefties this season, so you may as well fire him up again. If you can sell high, I would, but until then, enjoy.

Trevor Story is On-Fire at the Plate

Remember when we were telling you to buy low on Story just a few short weeks ago? Ha! Good luck trying to acquire him now. He went 2-for-4 with a three-run homer, four RBI and a stolen base against the White Sox and is putting up numbers you couldn’t even get at Coors Field. Get this – not only does Story have nine home runs over his last 14 games, but he is now batting .293 (17-for-58) with the nine homers, 27 RBI, 17 runs scored and five stolen bases over 15 games since May 10. Obviously he’s not going to continue at such a torrid pace, but I think we can all agree that his adjustment period to the American League and Fenway Park is complete and he remains a top-five fantasy shortstop.

Is Vladimir Guerrero Jr. Starting to Heat Up?

Is this the moment we’ve all been waiting for? After going 15-straight games without a home run, Vladdy Jr. went deep for the second time in two games and could be on the verge of the power boost everyone has been waiting for this season. The Blue Jays, on the whole, have been a major disappointment on the offensive front, but Guerrero heating up could certainly help ignite these dormant bats. We don’t want to get too ahead of ourselves, but the Angels pitchers could be in trouble this weekend. If you’re playing MLB DFS, this might be a good chance to get some Blue Jays into your lineup at a cheaper-than-normal price.

Manny Margot, OF TB – The streak was at 11 before he missed eight games with a hamstring injury and he is now currently at 13. He is slashing .477/.511/.795 with three homers, 15 RBI and eight runs scored during this span.

Brendan Rodgers, 2B COL – He is riding a 13-game hit streak in which he is batting .358 over 53 t-bats with one home run, nine RBI and eight runs scored.

Marcell Ozuna, OF ATL – The Braves outfielder continues to produce here in May and has now hit safely in 12-straight games with four homers, eight RBI and six runs scored. He is batting .300 with a .327 OBP in that span. He missed Thursday’s game with an abdominal issue but is expected to return Friday.

While being charged with five earned runs over six innings isn’t great, it might be the least to worry about if you are invested in Ohtani as a pitcher. Especially when it came with 10 strikeouts. But following his six completed innings, Ohtani was pinch-hit for and we learned that he was removed due to back stiffness. Ohtani said that it actually started to seize up on him in the first inning but he opted to trudge through. Manager Joe Maddon said he did not believe the injury to be serious, but he also didn’t know if he'd have his regular designated hitter in the lineup Friday. We all know how back issues can affect a player, so keep a watchful eye over the weekend. Maybe he gets the day off today and returns Saturday, but you also need to monitor beyond and see if they opt to push back his next start.

As the Angels dealt with their starting pitcher injuries last night, so did the Blue Jays as Ryu left after just five innings with reported tightness in his elbow. Ryu told reporters after the game that he was confident he would make his next start, but let’s talk about where there’s smoke, there’s fire. Ryu missed almost the entire first month of the season with inflammation in his left forearm and now it’s tightness in the left elbow? We know how this works, people. First, it’s the forearm, then there’s elbow soreness and the next thing you know, a guy gets shutdown and they start talking Tommy John surgery. We don’t want to get ahead of ourselves here, but at his age, with all the innings he’s thrown, this could be more serious than they are letting on.

This will make three games Acuna has missed with a strained quad. The Braves still haven’t mentioned an IL stint which seems positive, but you’ll have to check the daily MLB lineups over the weekend to see what happens. You have to expect the team to coddle their superstar a little bit, but this does not affect how I view Acuna for the long haul. His performance in the games played thus far has been strong and you have to appreciate the fact that he’s stealing bags at a much more rapid rate than we expected. He’s still a first-round talent for me, as evidenced by our little Tout Wars draft experiment.

It’s been a tough road for the Rockies, especially without having Kris Bryant’s bat in the middle of the lineup. But tonight’s game, to me, is about the pitching because their opponents, the Nationals, are also a soft lineup, especially if you pitch around Juan Soto. To me, Austin Gomber is highly underrated and deserves your support after tossing five quality starts in his last six outings. That included an appearance at home against these Nationals where he allowed just two runs over 6.2 innings. Meanwhile, the Nats are throwing Aaron Sanchez whose 7.16 ERA and 1.70 WHIP are pretty indicative of his talent level right now. Colorado may have lost four of their last five, but they right the ship today.

Brandon Woodruff looks like he’s starting to finally round into form with allowing just two runs over his last two starts (11 innings), but I’m still a little concerned with how hot the Cardinals bats are right now, posting a .339 wOBA over the past seven days. Paul Goldschmidt is killing it with a 17-game hit streak while Tommy Edman, Nolan Gorman and Harrison Bader are all posting a wOBA of .330 or better over that span. Meanwhile, the Brewers bats, with their .326 wOBA against righties, get a look at the very-hittable Dakota Hudson who already gave up three runs in three innings to Milwaukee earlier this season and is coming off a terrible start in which he allowed four earned runs before being pulled in the middle of the fifth inning. The money line says the Brewers win, but I prefer the value bet in the total runs over/under.

Raise your hand if you like picking on Mariners righty Chris Flexen. Over his last three starts, Flexen has allowed 14 earned runs (six home runs) over 14.1 innings and has allowed 23 hits and six walks in that span. The Houston Astros have been struggling recently but still have a .325 wOBA against righties this season. With Justin Verlander on the mound, I think the Mariners bats will be held down (they’re fanning 26.2% of the time over the past week) and the Astros will rekindle their offensive spark. There’s no value on the money line, but you know how I like visiting teams expected to dominate when it comes to the run line.