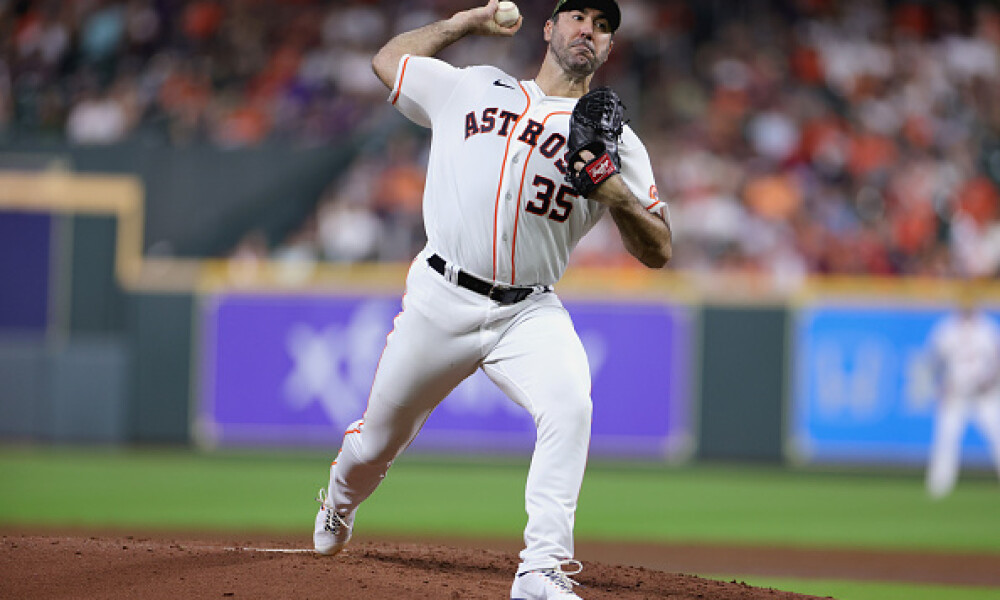 We've reached the final day of Week 6 of the fantasy baseball season. Today's the day you place your fantasy baseball waiver wire claims for the upcoming week, check over the MLB injury reports to see what the latest injuries are, and find out if any more MLB prospects will be getting the call much like Adley Rutschman, Nolan Gorman and Matthew Liberatore have been over the past few days. Before we close out the week however let's take a look at some of the top performances from Saturday and highlight my favorite MLB Best Bets and player props for Sunday's games!

It was another masterclass performance from Verlander on Saturday as he took the mound against the Texas Rangers. In this start, Verlander tossed six shutout innings while striking out eight. He is now 6-1 on the season with a sparkling 1.22 ERA and a 0.72 WHIP. He has struck out 49 over 51.2 innings and for a guy who had made just one start over the past two years he is looking an awful lot like the man who won the 2019 Cy Young award which was the last full season he pitched. Those of you who took the mid-round chance on Verlander have maybe the steal of fantasy baseball drafts.

Baseball America had Rutschman as the number one prospect in baseball heading into the 2022 season after he hit .285 with 23 home runs and an OPS of .899 across Double-A and Triple-A last season. Through 19 games this season at the minor league level Rutschman was hitting .309 with three home runs and an OPS of .942 and the Orioles decided that their future was now. Rutschman went 1-for-4 with a triple in his major league debut and has the offensive upside to rival some of the premier offensive catchers in baseball. At his ceiling I think we, see a guy with 25+ home run upside with a .280+ batting average. It was a nice start to his major league career and it now gives everyone a reason to check in on how the Orioles are doing every now and again.

If it feels like baseballs are starting to fly a bit more over the past week or so I would have to say I agree. Over the past two days, we saw 32 home runs hit each day. On Saturday we saw five players hit two home runs:

If you dig the long ball, then get ready for a summer of fun.

Greene was a favorite sleeper pick heading into the fantasy baseball season. The hard-throwing right-hander entered the 2022 season as a Top 35 prospect according to Baseball America, MLB Pipeline, and Baseball Prospectus. Unfortunately for fantasy managers, the first five starts for Greene were a disaster as the rookie right-hander went 1-4 with an 8.71 ERA while allowing 10 home runs over 20.2 innings. If there was any glimmer of upside it was the strikeouts as Greene had 29 strikeouts over those 20.2 innings but he was pretty much unstartable for fantasy managers and many cut bait and some figured he was destined for a demotion back to Triple-A. However, over the last three starts, Greene looks like he may have figured some things out. Beginning with his outing against the Brewers on May 10th, Greene has allowed just four runs over the last 18.2 innings while striking out 21 during that stretch. His ERA has since dropped from 8.71 to 5.49 during these last three games. More importantly, he has limited the home run ball which was doing so much of the damage against him early on. If Greene can start to control his pitches a bit better, teams are going to have a real hard time against him as his stuff is pretty filthy.

We loved this matchup yesterday but unfortunately, the game got postponed but nothing here has really changed. We still get Bieber in a strong matchup as he runs up against the Detroit Tigers. The Tigers have a near 24-percent strikeout rate against right-handed pitching this season and over the past week that number is closer to 25-percent. Bieber has hit the over on today's strikeout prop of 6.5 in three of the last five games. I like that Bieber has thrown over 100 pitches in three of his last four games as it means the Guardians are going to give him plenty of leash to hit today's strikeout total against a weak opponent.

The Reds have a 25-percent strikeout rate against LHP this season with a .270 wOBA and today they run up against Kikuchi who is averaging a strikeout per inning this season, with a 9.3 K/9 on the year. Kikuchi has hit the over on this prop in three straight games and this is one of the best overall matchups on the board.

This one may be a bit of a shock but the Astros rank 22nd in wOBA, 23rd in OPS and 27th in average against LHP this season. A team that over the past few years dominated southpaws just can't hit them and we saw that on display two days ago when Martín Pérez tossed a complete game shutout against them. Now, Taylor Hearn is not having the same type of season that Perez is having but he did face the Astros already this year and threw five innings which is all we need from him today to hit the over on this pro. He has thrown five innings in three of the last four starts.