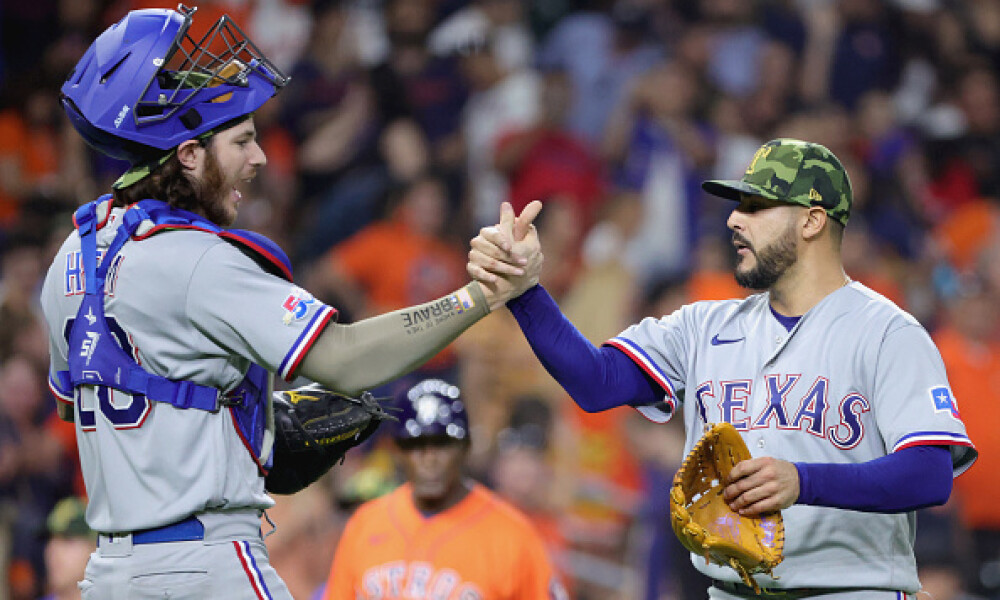 Week 6 of the fantasy baseball season has hit the weekend but before you start looking ahead to the fantasy baseball waiver wire for Week 7 and organizing your upcoming fantasy baseball player rankings let's take a few moments to appreciate the top performances and stories from around the MLB over the last 24 hours. The MLB celebrated Armed Forces Day which meant players were wearing team-branded MLB camo hats in honor of the armed forces. There were plenty of top performances from around the league and some trends that we should really start paying attention to as we begin to get a larger sample size of production this season.

Perez has been outstanding to start the 2022 season, posting a 1.64 ERA and a 0.99 WHIP over his first eight starts of the year. On Friday night he tossed a complete-game shutout against the Houston Astros and over his last six outings he has allowed just three earned runs over 35.1 innings. So, the question here is whether or not Perez can continue to pitch at this level? Looking at www.fangraphs.com we see that Perez has an xERA of 2.43, a FIP of 2.40 and an xFIP of 3.58. All three are above his current ERA of 1.64 but still very good numbers. Perez has a career ERA of 4.58 and a career FIP of 4.45 so as of right now he is on pace to have the best season of his career and it's not even close. Perez is not a strikeout pitcher, posting a K/9 of just 6.93 and his .266 BABIP is not too outrageous to say it isn't sustainable. Perez benefits from a pitcher-friendly home ballpark and without a doubt, he is due for some regression when it comes to home runs allowed as Perez has yet to allow a home run in any of his eight starts. So, should you be looking to sell high on Martín Pérez or should we be holding him as part of your fantasy baseball rotation? I think any responsible fantasy baseball manager would be sending out offers to see if another manager would be willing to overpay for Perez. While he has been among the top starters in baseball to this point, some level of regression is due and I'd be willing to bet that a pitcher with a career ERA of 4.58 over 11 major league seasons is more likely to pitch to his career averages than have a career year at age 31.

There were plenty of home runs hit on Friday but three of them were hit by Diamondbacks third basemen Josh Rojas one night after Trevor Story hit three home runs on Thursday night. Rojas started the season on the injured list but has been effective since making his debut on May 6th, notching at least one hit in 11 of the 14 games he has played. The three home runs were his first three of the season. Last season Rojas hit 11 home runs over 139 games so he isn't exactly known as a bopper but it's nice to celebrate these types of performances given how rare they are. Rojas should be added off your fantasy baseball waiver wire if he is available as he has multipositional eligibility and can provide some pop with some stolen base upside as well.

One night after hitting three home runs against the Seattle Mariners Trevor Story continued to show he is turning a corner by launching a grand slam off Robbie Ray in the third inning of Boston's 7-3 win over Seattle on Friday. Over the first 24 games of the season, Story hit just .194 with zero home runs and an OPS of .545 with a strikeout rate over 30%. However, things are quickly turning around for Story as he is hitting .324 with six home runs, four stolen bases and an OPS of 1.247 over the last 10 games. Fantasy Baseball managers should be breathing a sigh of relief that Story is starting to get hot and while I don't think he is going to be hitting .330 for the rest of the season he does hit in the middle of an elite lineup with the likes of J.D. Martinez, Xander Bogaerts and Rafael Devers which should provide him with plenty of lineup security and opportunities to drive in runs. Ultimately I think we see Story hit about .270 this season with 25-30 home runs and this turnaround is just the start of a productive season ahead.

Adam Wainwright Continues His Domination Over the Pirates

Few pitchers have dominated a team more than Wainwright has dominated the Pittsburgh Pirates over the last handful of seasons and that Domination continued again on Friday as he allowed just one run over seven innings. In two starts against the Pirates this season he has allowed one run over 13 innings. In four starts last season against the Pirates Wainwright allowed one earned run over 30.0 innings. Combined he has allowed two earned runs over his last 43 innings against this Pirates roster. With these two teams playing in the same division it is likely that Waino gets another crack or two against the Pirates this season and we should be all over it.

We got a great matchup today for Bieber as he runs up against the Detroit Tigers. The Tigers have a near 24-percent strikeout rate against right-handed pitching this season and over the past week that number is closer to 25-percent. Bieber has hit the over on today's strikeout prop of 6.5 in three of the last five games. I like that Bieber has thrown over 100 pitches in three of his last four games as it means the Guardians are going to give him plenty of leash to hit today's strikeout total against a weak opponent.

Wright has been one of the league's better strikeout pitchers this season, owning a 10.7 K/9 on the season. He has faced that Marlins already this season and had 11 strikeouts in that game over six innings. Now, the Marlins have been better when it comes to team strikeout rate but we did see Charlie Morton finish with five strikeouts yesterday before getting lifted after 5.1 innings. Wright has proven to be a better strikeout pitcher than Morton this season so I will go ahead and make the bet that he can hit the over here as he comes off a nine strikeout performance against the Padres.

Verlander labored through five shutout innings in his last start, throwing 107 pitches against the Nationals. Washington has been a tough opponent for most this season as they don't strike out a ton and work counts. The Rangers are an easier draw for Verlander today and he has already faced them this season, tossing seven shutout innings while striking out eight. We need just 6.1 innings from Verlander to hit the over on this prop and that is something he has done in three of his last four starts.