Fantasy Baseball May 12 Round Up: Christian Yelich Hits for the Cycle While Tylor Megill Gets Pounded by the Nationals 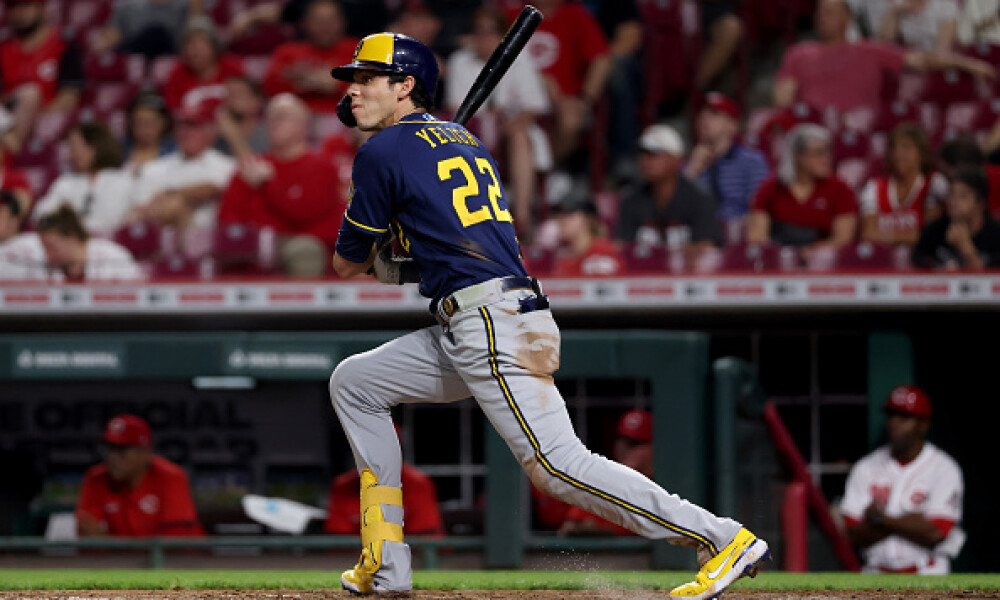 Another fantasy baseball scoring period is about to come to an end so it’s important for you to start preparing for the weekend and subsequent fantasy baseball waiver wire work. It doesn’t matter if you’re playing high stakes NFBC fantasy baseball or just a simple home league on Yahoo Sports Fantasy Baseball, keeping an eye on the near-distant future is paramount to your success. MLB teams are continuously adjusting their rosters, so if your using fantasy baseball streamers or looking for a back-up for the oft-injured Byron Buxton or even just looking to stash a prospect like Adley Rutschman or Nolan Gorman, staying two steps ahead of your competition is the key. Checking in on the daily fantasy baseball news and how it affects your fantasy baseball standings is certainly a great start each day.

It came in a heartbreaking, losing effort, but Yelich was absolutely dominant at the plate against the Cincinnati Reds yesterday. He doubled in his first at-bat, homered in his second, a three-run shot in the third inning, singled in his next at-bat, leaving just the elusive triple. The Brewers and Reds were trading haymakers in the late innings of this 14-11 battle and Yelich, who flied out in his fourth at-bat, was granted one more try in the ninth. He clearly did not disappoint. He is now tied for the the most cycles in MLB history with three, though chasing a record like that is more of a fluke than anything else. Of course, all three of Yelich’s cycles have come against the Reds, so maybe we see a record-breaking moment later on in the season.

Walks will kill a pitcher’s day and yesterday was no different for Mariners starter Logan Gilbert who issued two free passes in the fourth inning, loaded the bases and was forced to throw it over the plate to Rhys Hoskins. He annihilated the ball for a grand slam and has built himself a little but of a home run streak now that is up to three games. In that span, Hoskins is 5-for-13 (.385) with three home runs and seven RBI. Granted, that brings his average up to just .222 on the season, but a streak like this is sometimes all you need to get back on-track. We’re not expecting more than a .240 average from the Phillies first baseman, but with a career .357 OBP, we expect the balls to start bouncing his way a little more which will force the pitchers to stay away from him and bring that walk rate back up to where it belongs.

You always have to give props when appropriate, so when Thomas connected for his first big-league home run off a hurler as dominant as Sandy Alcantara is and was looking in yesterday’s effort, you have to shout it out. Thomas has flashed 20-homer power in the minors before and he can swipe a few bags here and there, but he is much more known for his batting average and on-base work. The occasional home run or steal is always welcome, but just know what type of player you are looking at before placing unrealistic expectations on him. Just because everyone is talking about him right now, doesn’t mean he’s a strong fit for your fantasy team.

Granted, it’s only been two games, but Seager, who entered this current series against the Kansas City Royals batting just .231 with a .289 OBP, has now homered three times in the last two games, kicking in three RBI and three runs scored. He closed out April with a five-game hit streak, went dormant for four and is now back to swinging a big stick. If you’re looking to make moves and have some power to give, using Seager as bait in a fantasy baseball trade while he’s hot could help the situation. You’re not going to get a big deal done just trading him on his own, but if you can add him to a package while he is hot, you never know what you can pull in.

Luke Voit Homers Twice in Losing Effort for the Padres

While the Padres may have lost the game, they could have received a nice power boost with the effort by Luke Voit. His career in San Diego got off to an extremely rocky start as he slumped right out of the gate and then lost time to injuries. The Padres lineup has been pretty punchless most of the season, as evidenced by their plus-eight run-differential, but perhaps the return of Voit can spark the offense. Keep tabs and if you’re looking for cheap power, Voit just might be available on your waiver wire.

Personally, I see this as an opportune time to buy low on Megill if you’re looking for pitching help. Nothing shatters the confidence of a fantasy baseball owner like watching your guy give up eight earned runs in just 1.1 innings. The damage to the ERA is massive and it takes a little while for it to come back down. While Megill was thrashed by a weak Washington Nationals team, you have to look at the entire package. We’ve seen the uptick in velocity and we’ve seen the pitch mix altered to the point where he’s been doing a good job out-thinking the hitters. These are important factors to take in. Games like this will happen, but how you bounce back is the true test of mettle. I’m willing to give him a pass and look to his next start. You should too.

It’s always disappointing when you watch your guy throw an amazing game and not get the win. Frustrating is probably a better word. So when Andrew Kittredge served up a pinch-hit, two-run homer to Taylor Ward in the eighth inning, McClanahan owners were absolutely devastated. The right-hander was catching a break with both Ward and Mike Trout out of the lineup and he delivered in style with 11 strikeouts over seven scoreless innings. The Rays looked like they were going to cruise to a 2-0 win and complete McClanahan’s masterpiece, but this is what bullpens do these days. Still, you have to be pretty excited about McClanahan’s 2.52 ERA, the 0.92 WHIP and the mammoth 58 strikeouts over just 39.1 innings. And for the record, this is not a sell high candidate. I want to lock McClanahan into my roster for the season.

Mountcastle was a late scratch from yesterday’s Orioles lineup, but the team does not believe this is anything long-term. He is considered day-to-day for right now and he won’t land on the injured list, but expect him to miss another game or two and see if they look to use him as a pinch-hitter at all. He is currently slashing 268/.299/.402 with four homers, 16 RBI and two stolen bases, so hopefully the absence is not long.

Players On the Mend:

Chicago White Sox outfielder Andrew Vaughn (hand) is currently on his Triple-A rehab assignment and could be back at the start of next week.

The Minnesota Twins are hoping that starter Dylan Bundy will not need a rehab stint when he is activated from the COVID-19 injured list. He’s been out since May 5, so keep an eye on the activation news.

St. Louis Cardinals ace Jack Flaherty threw another bullpen session on Wednesday and the team is hoping now that, without any setbacks, Flaherty could return to the mound sometime in June.

It’s been a rough couple of days for me on the best bets as a winless day yesterday pushes me to 0-6 in these pages this week. I did give out two bets on the Fantasy Alarm Show on Tuesday that hit, but again, that doesn’t help my record here. We’ll take it slow and steady for today and see if we can’ get back on-track.

While the Kansas City Royals may have bested the Texas Rangers yesterday, they have routinely struggled to score runs, as evidenced by the minus-40 run-differential we are seeing this season. They are actually averaging 3.3 runs per game over their last 11 games and are now facing a lefty tonight. The Royals have posted a dismal .275 wOBA against southpaws this season and while Taylor Hearn is not someone in who I really like to invest, I think he can do enough to keep the Royals bats at bay.

While Dylan Bundy remains out, the Twins will continue to turn to Josh Winder, a young righty who has made five appearances this season (two starts) and posted a 1.61 ERA with 20 strikeouts over 22.1 innings. He hasn’t allowed an earned run in those two starts and will need to keep his game sharp if he wants to end the Astros’ eight-game winning streak. He’ll match up against Luis García who has tossed back-to-back quality starts and now gets a Twins team that has averaged fewer than three runs per game over their last six. I’m leaning towards the Astros finding success in extending their win streak, but I also don’t see a lot of runs being scored here.