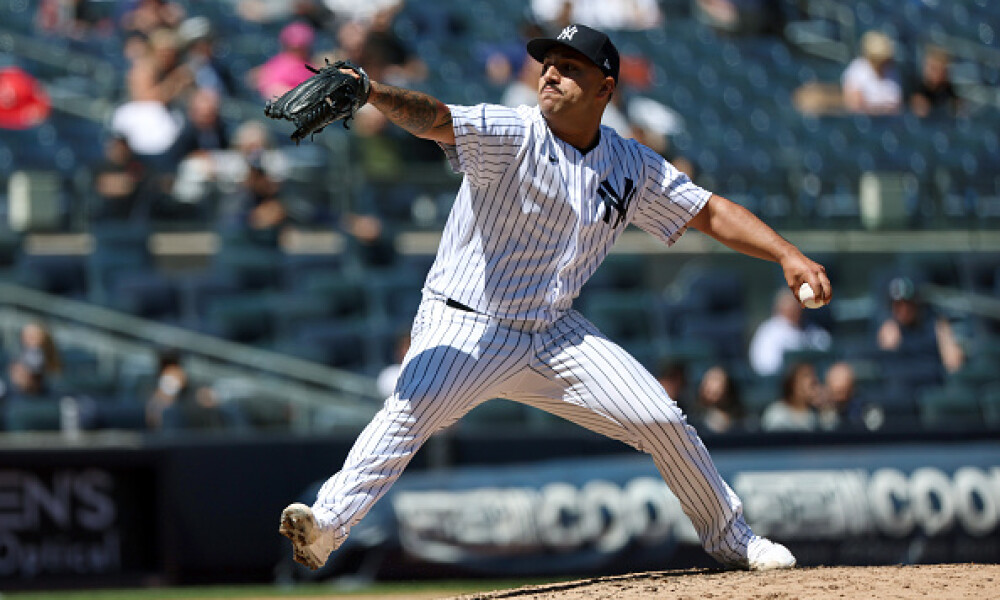 Mark down Monday, May 9th, 2022 as a breakout day for many fantasy baseball waiver wire candidates. Some of the big-time performances also came from guys you should be looking to acquire via trade in your fantasy baseball leagues – maybe even sell high on some too. We have plenty of players creeping up the fantasy baseball rankings and flying under the radar for most managers. Monday was one of the more fun days of baseball and we continue to see the emergence of MLB breakout rookies such as Julio Rodríguez, who notched three more hits yesterday. Will Tuesday be Bobby Witt Jr.’s day as he faces a lefty in Martín Pérez? Will Shohei Ohtani have an encore to the “Sho” tonight? Let’s take both a look back and a look forward to the latest MLB news, performances, injuries, and more to help you win in fantasy baseball!

Some people were still having their coffee when Nestor Cortes Jr. and the Yankees started playing baseball on Monday, but you knew he was going to have a big day from the first pitch he delivered. He proceeded to twirl 7.1 scoreless innings while striking out 11. He also had a no-hitter entering the eighth inning and manager Aaron Boone said he was going to let Cortes chase history had he completed eight no-hit innings.

This outing lowered Cortes’ ERA to a sparkling 1.41 through his first six starts of the year and raised his K-rate up over 33%. Both are amongst the league's best marks and there are no signs of slowing up because he was also this good last year after he transitioned to a starter. This is not a sell-high fantasy baseball option. This is a try-to-acquire or be thankful you have him.

The Sho-Stopper and Thor’s Hammer

Sure we’re only in May, but if Shohei Ohtani continues to be this good – along with Noah Syndergaard’s resurgence – the first-place Angels could stick around late into September and into the postseason. Ohtani hit his first career grand slam and belted two home runs to go along with three hits and five RBI on Monday evening. They were home runs five and six on the year for Ohtani, one behind Mike Trout for the team lead.

It’s crazy to think Noah Syndergaard is still just 29 years old, but here we are – and he still looks like he has plenty left in the tank. *knocks on wood* It was another strong outing for Syndergaard, who allowed just one run while striking out seven. He moved to 3-1 on the year and lowered his ERA to 2.45. Syndergaard’s strikeout rate is lower than it’s been in quite some time, but there’s light at the end of the tunnel as he’s notched a 12% swinging strike rate up to this point. As long as he continues to generate swings, he’ll generate strikeouts.

I mean, wow. The Guardians went into the ninth inning of Monday’s game trailing 8-2 after A.J. Pollock hit a three-run bomb in the eighth. Then Josh Naylor happened. He hit a grand slam in the top of the ninth to tie the game and as an encore, hit the game-winning three-run home run in the 11th inning.

Naylor went 3-for-5 with a double, two homers, eight runs batted in, and walked for his fourth trip on the bases. I think he was pretty excited about his second home run.

After Monday’s game, Naylor raised his average to .338 and he now has an OPS trending towards 1.000 to boot. Naylor is only 13.1% rostered in ESPN leagues with first base AND outfield eligibility. He could be a very viable pickup off your fantasy baseball waiver wire in his current form.

Sometimes it’s never too late to have a career resurgence, just ask Paul Blackburn. The Oakland righty is 28 years old and having an absolutely stellar start to his 2022 campaign. Blackburn spun another six scoreless innings on Monday, which lowered his ERA to 1.74 this season.

It was the third time this year Blackburn hasn’t allowed a run during an outing, and it was actually the first time all year he’s pitched at least six innings. It’s great to see the pitch count expanded as well as the length of his outing too.

Blackburn has completely abandoned his slider this year, throwing it just 0.2% of the time – compared to 21% for his career. Instead, he’s implemented a cutter for the first time in his career while also throwing many more curveballs than he has in years past. Sometimes it takes a while to figure out what’s most effective and it seems like Blackburn is finally putting it all together. If you’re looking for pitching depth, Blackburn could be the answer.

Seiya Suzuki left Monday’s game with an ankle injury after trying to beat out a double-play ball. He was quoted as saying, “I’m fine,” through his interpreter after the game and has been deemed day-to-day by Cubs manager David Ross. Suzuki is slumping lately, so maybe a couple of days off could do him some good.

Manuel Margot’s Bat Stays Hot, But Hamstring Cools Him Down

After a second successful stolen base attempt on Monday, Manuel Margot had his hamstring flair up and was forced out of the game. That was after two more hits and two stolen bases. Although this injury could potentially hinder him for a few days – possibly longer when we find out more – Margot is seemingly a must-add right now.

In the month of May (nine games), Margot is slashing .484/.515/.903 with a .608 wOBA, three home runs, and four stolen bases. He’s contributing across the board and is coming off the American League Player of the Week honors. The Rays are listing him day-to-day and we’ll see how this thing plays out moving forward.

We saw Chris Taylor leave Monday’s game after fouling a ball off his knee, but he had X-rays that came back negative. Taylor is scheduled for an off-day on Tuesday anyway, so he’ll be listed as day-to-day for now. You can safely take him out of your lineups for today’s slate of baseball games.

On Tuesday, the San Diego Padres host the Chicago Cubs for the second game of their series. The Padres look to get back at the Cubs after falling 6-0 on Monday. San Diego is sending right-hander Mike Clevinger to the hill on Tuesday, and bringing up the handedness of the pitcher matters here.

The Cubs rank in the top half of the league against left-handed pitching, but they’re near the bottom vs. righties. They’re 19th in OPS and wOBA against righties this year and strike out a lot, too – posting a 24.8% K-rate. Clevinger looked decent in his first start, but he just needs to hone in on the walks because the Cubs have been good at drawing walks this season. They’ve been terrible offensively lately, ranking 28th in OPS over the past two weeks.

On the flipside, Wade Miley will be making his season debut for the Cubs tonight as he has been out with left-elbow inflammation. Right-handed hitters had success against Miley last year, notching a .331 wOBA against him. With how Manny Machado has swung the bat, he could beat Miley singlehandedly.

Alex Wood has made five starts this year and only twice has he gone over the 5.5 strikeouts prop on DraftKings Sportsbook. Sure he did it in his last start against a tough Dodgers offense, but you know who else has been tough – especially against left-handed pitching? The Colorado Rockies.

Against left-handed pitching, the Rockies have the fifth-lowest strikeout rate in baseball at 20.3%. They’re also second in OPS against lefties, so they’re not only putting the ball in play but also hitting the ball hard every time they face a southpaw.

Right-handed hitters are batting .301 with an .840 OPS, and .371 wOBA against Wood this season. Three of the Rockies' top four projected hitters have notched a .400 wOBA or better versus left-handed pitching this year, and five of Colorado's starting nine are hitting north of .340 vs. LHP.