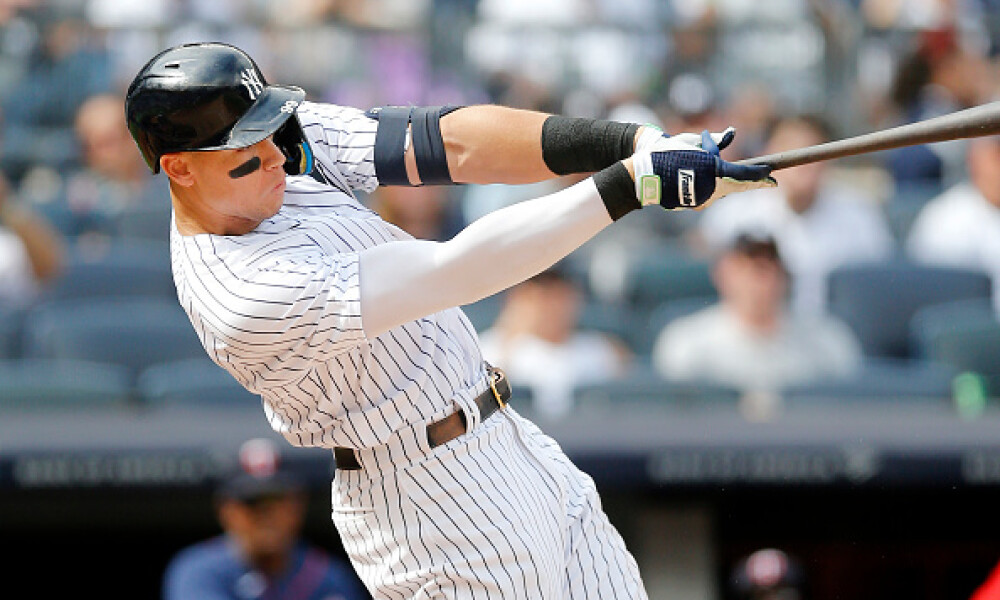 Your fantasy baseball draft prep should be pretty intense right now as the 2022 MLB season is nearly upon us. You should be sifting through our 2022 fantasy baseball rankings, studying our draft tools like the 2022 fantasy baseball mock draft and our auction values, and most of all, staying current on all the latest MLB news which ties into our updates to the Ultimate Fantasy Baseball Cheat Sheet. I just updated the draft grid and my rankings again yesterday. If you’re not current, it’s a good thing you stopped in for today’s Fantasy Baseball Round-Up.

See that? All that debate over the past couple of weeks was all for naught as New York City Mayor Eric Adams has reversed the private-sector mandate which will now allow all unvaccinated Yankees and Mets to be able to play in their home games. We saw quite the dust-up when Aaron Judge was specifically asked if he was vaccinated. His decision to skip over the question led to huge debates regarding the fantasy baseball value of players who could miss upwards of 80 games due to the city’s vaccination policy. We saw how it negatively impacted the NBA as Brooklyn Nets star Kyrie Irving was banned from playing home games within the city limits of New York, but was somehow still allowed to sit, unmasked, in the seats right next to the team bench. The inconsistencies of the policy received tremendous backlash, but those arguments can come to a close now that the mandate has been lifted. So just as I said in yesterday’s Round Up, I was not going to mess with player rankings guessing as to who was vaccinated and who wasn’t, and I’m glad we can now put that to bed. Draft your Yankees and Mets with confidence.

If you missed Wednesday’s Fantasy Alarm Show on SiriusXM Fantasy Sports Radio, you missed another banger of an interview. We had Seattle Mariners President of Baseball Operation Jerry Dipoto join us to shed some light on a few burning fantasy baseball questions. You should really listen to the full interview on the SXM App, but to highlight a few things – Ty France is locked in as his first baseman; Adam Frazier appears to have second base locked up primarily, but we should still see Abraham Toro make a few appearances as he seems to be the guy who will spend most of his time at DH but fill in as a utility man around the diamond; Kyle Lewis will likely serve as the fourth outfielder and part-time DH, though don’t be surprised to see Jesse Winker sit against some of the tougher lefties; Dipoto is very high on his pitching staff, but singled out Logan Gilbert as a major breakout candidate this season; the fifth starter could be Matt Brash, a player Dipoto is extremely high on; closer-by committee is the plan here for Seattle; and finally, the team will take its time with Julio Rodríguez as they have a strong group in the outfield and on the bench. Again, go to the SXM App, search Fantasy Alarm and catch all the interviews we’ve done over the last several days, including Atlanta Braves GM Alex Anthopoulos, New York Yankees manager Aaron Boone and Boston Red Sox manager Alex Cora. Some very eye-opening stuff.

If you’ve listened to Jim Bowden over the past few days, you can hear just how high he is on Phillies starter Ranger Suárez. Vis issues delayed the southpaw’s arrival to camp, but the work he puts in between now and the start of the MLB season could still land him an early spot in the rotation. He looked amazing last year, posting a 1.36 ERA over 12 starts and 27 relief appearances. He averages a little more than a strikeout per inning and has the chance to throw 120-130 innings this season. Monitor his early workload, but there’s no reason not to jump for him even a little before his current 181.74 ADP.

With the addition of the universal DH, there’s some life to former prospect Keston Hiura. While he flashed some burgeoning power in the minors, his defense had been horrendous and the Brewers just couldn’t handle him in their infield. The plate discipline had also gone to crap too as he was posting strikeout rates between 35-40% over the last two years. But Hiura revamped his swing, ditched the full leg-kick and has been finding tremendous success during the spring. He’s already got five hits, including a double and two home runs over 10 at-bats. He only qualifies at first base/corner infield right now and he's likely sharing time at DH with Andrew McCutchen, but one injury to an outfielder (I’m looking at your back, Christian Yelich) and Hiura could end up seeing strong at-bats during the season.

The deal is still pending a physical, but it sounds like everything else is ready to go. Pham will immediately slot into one of the outfield spots and should be a strong candidate to lead off for the Reds this season. He’s got double-digit home run power and should be able to swipe 15 bags this season, so given the favorable ballpark dimensions at Great American, Pham really couldn’t have landed in a better spot for himself. Injuries are always an issue with him, so don’t overreact to the signing, but you may want to bump him up your draft boards just a touch as the current 284 ADP is going to be a little low for him now.