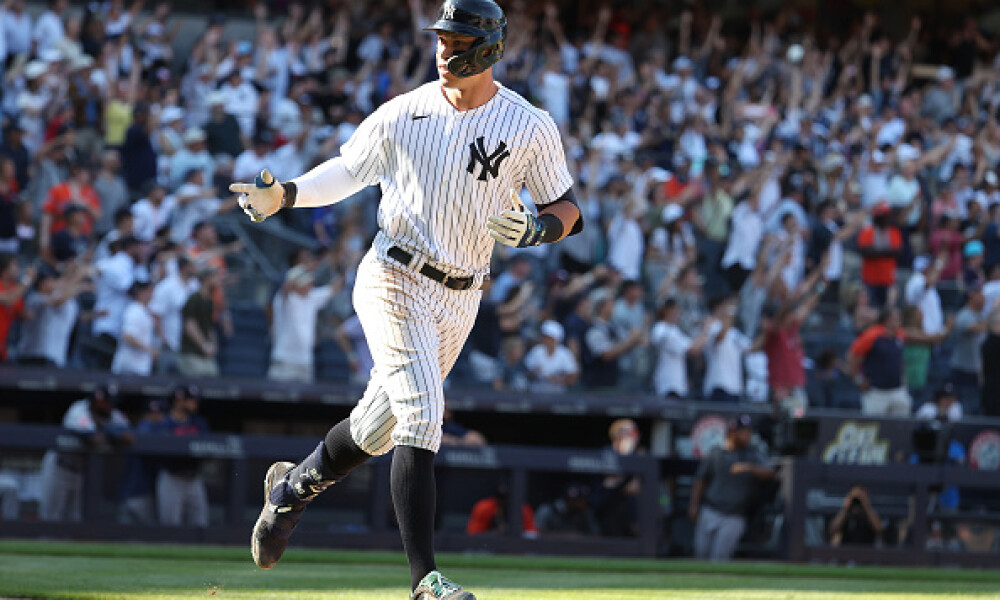 It’s Monday and that means another fantasy baseball week is upon us. Before taking a look ahead at your fantasy baseball lineups for this week, we first need to look back at the top MLB news and headlines from Sunday's set of baseball games. That includes another New York Yankees walk-off by AL MVP favorite Aaron Judge as he stays atop fantasy baseball rankings. We also had big pitching performances by Dylan Cease and Spencer Strider as both continue to outperform MLB projections. There are also some key updates to the latest MLB injury report, led by Atlanta Braves star Ronald Acuña Jr. Don't forget to check out the latest fantasy baseball waiver wire targets, the MLB top prospects to know, and the players trending up and down in the fantasy baseball stock watch. After we look back at Sunday's MLB top performers, we'll also help you build MLB DFS lineups with the top plays for tonight's games. Now let's look at the fantasy baseball news, MLB top players, and key injuries from Sunday before looking ahead to Monday's MLB daily fantasy slate. Be sure to use the MLB weather report and the confirmed MLB lineups pages to help build daily fantasy baseball lineups.

What a turn of events. The Yankees looked like they were on their way to becoming the first team in history to get no-hit in consecutive games, but they did not panic. Giancarlo Stanton put a stop to it all in the seventh with a big blast. So, what happens next? You got it – a Bronx Bombers comeback and a walk-off home run by Aaron Judge. It was Judge’s major league-leading 28th home run and the Yankees' major league-leading 10th walk-off as the team continues to pace all of baseball with a 53-20 record.

Spencer Strider for Rookie of the Year?

Spencer Strider, the Atlanta Braves rookie right-hander, threw his name into the hat for the NL Rookie of the Year race last night after throwing six scoreless innings in a no-decision against the mighty Dodgers. Strider struck out seven batters and allowed only five hits with no walks in the Braves' loss. He now carries a 3.02 ERA/1.08 WHIP and if Strider keeps turning in performances like this, he will be in the ROY hardware convo at the end of the season.

He is the epitome of “boom or bust” but after a tough stretch in mid-May, Dylan Cease is pitching like a Cy Young contender. Yesterday, the White Sox starter struck out 13 Oriole batters in seven innings. Now over his last three starts, he has allowed no earned runs and struck out 32 in 18 innings. Cease is second in the league in strikeouts (121), behind only Shane McClanahan (123). McClanahan kept his grasp on the strikeout crown by recording 10 Ks against the Pirates yesterday.

Rowdy Tellez, a former Blue Jay, was hitting the ball hard yesterday in the Brewers' big win over Toronto. He actually had the hardest-hit ball of the game at 112.6 mph and that wasn’t even on one of his two home runs. Tellez broke out of a mini-slump in a big way against his former team with a double-dong game, hitting his 12th and 13th home runs in the first and sixth innings of the 10-3 rout.

St. Louis Cardinals veteran right-hander Jack Flaherty was removed early from his start yesterday due to stiffness in his pitching shoulder. In another blow to Flaherty’s return from a long-term injury, he did not come back out for the third inning due to a “dead arm”. He already missed the first 2-3 months of the season with right shoulder inflammation and this time it was more of a “lack of feeling” than soreness. The good news is that this is not in the same area as the prior injury, but chances are that Flaherty will return to the Injured List.

Rays phenom shortstop Wander Franco returned to the lineup for the first time since May 31 (right quadriceps). He went 1-for-5 in his return and is now batting .268 with four HR and 19 RBI. Franco was reportedly playing hurt for a couple of weeks before his injury and it was apparent that he needed to be shut down after hitting .150 in the 17 games before his IL stint after a .331 start to the season.

Brandon Crawford to IL; Yermín Mercedes is Back

Giants shortstop Brandon Crawford has landed on the IL with left knee inflammation, which has led the way for the big-league return of Yermín Mercedes. The designated hitter/catcher received cult-like status early last season after his hitting exploits with the White Sox. The Giants claimed Mercedes off waivers from the White Sox last week and most fans can remember his big month of April 2021 when he slashed .415/.455/.659 with a 1.114 OPS and blasted 5 HR/16 RBI on his way to Rookie of the Month. Things drastically changed after that and within three months he was not even on a big-league roster. Good luck to Mercedes on his return!

Acuna remained out yesterday after fouling a ball off his foot and leaving Saturday’s game against the Dodgers as a precaution. Reports are that he is still having trouble putting much pressure on the foot, but the hope is that Acuna returns in a couple of days. Fantasy managers may want to have an option waiting in the wings if the Braves do play it safe and place him on the Injured List.

Jordan Montgomery is a top arm as he opens as a huge -300 favorite in Yankee Stadium tonight. He'll face the A’s, who are in the bottom third of almost every team offensive category. Montgomery may not be the most exciting pitcher, but he gives you innings and is consistent. He has six straight starts of six-plus innings and also ranks 11th in the league with an ERA of 2.97.

George Kirby is the top value and may be the best all-around pitcher on the slate with arms like Lucas Giolito and Kevin Gausman going through struggles. Over the last month, he owns the highest strikeout rate on the slate (23.1%) with four of his last five outings being quality starts. Kirby also has only allowed seven earned runs in his last five starts. which includes blanking the Orioles over six innings in May – the same team he will be facing tonight.

This one doesn’t take much thought as the Los Angeles Dodgers take a trip to Coors Field. They face Chad Kuhl, who is not missing bats (17.5% K rate) and is allowing a .203 ISO/.336 wOBA to left-handed batters. Plus, the Dodgers will face a bad Rockies bullpen that has the worst SIERA in the game.

The Toronto Blue Jays have hit 46 home runs in the month of June and will be facing spot starter Connor Seabold of the Red Sox in hitter-friendly Rogers Centre. Seabold has been decent at Triple-A Worcester this season, but the Jays are not a minor league offense.

Left-hander Kris Bubic has not been very good for the Royals with a 5.07 xFIP, 19% strikeout rate, and 46% hard contact allowed this season. He also has an ERA of 7.78 in his six home starts and allows a .375 ISO/.567 wOBA to right-handed bats. Load up on Texas Rangers right-handed hitters like Marcus Semien, Mitch Garver, and Adolis García.