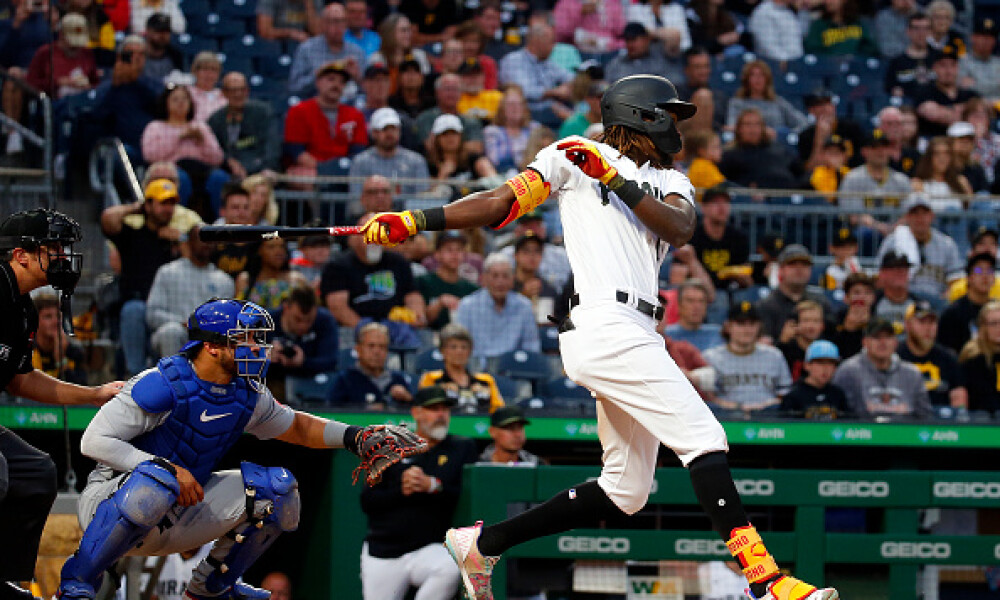 Monday’s Major League Baseball Action was headlined by the game’s aces and top prospects. Pittsburgh Pirates’ Oneil Cruz made his 2022 debut and was electrifying to say the least. The sound of typing and screams of joy are heard from those that were able to pick up Cruz, who is arguably going to be one of the hottest fantasy baseball waiver wire pickups if he isn’t already owned. The injury to Manny Machado opened the path for C.J. Abrams to rejoin the San Diego Padres, and Jeter Downs, one of the biggest pieces in the Mookie Betts trade, was called up, but his path to playing time for the Boston Red Sox isn’t as clear as Cruz’s or Abrams’.

If you aren’t already doing so, be sure to check out our Fantasy Baseball Prospect Report on a weekly basis so that you don’t miss out on the next top prospect that gets the call. It was aces galore last night, as New York’s Gerrit Cole took a no-hitter into the eighth inning, Shane McClanahan strengthened his bid to be the AL Starter in the Major League Baseball All-Star Game, Corbin Burnes notched double-digit strikeouts, and the Logan Webb versus Max Fried matchup lived up to its lofty expectations. We’ll break down some notable injury news from yesterday’s action, and all injury updates can be found in our Injury Report. As we close the door on Monday’s Major League Baseball action, I’ll give you my two favorite MLB picks for Tuesday’s action, and if you will be constructing some MLB DFS lineups, head over to DFS Alarm for all things DFS, including MLB projections, MLB lineups, and the MLB weather report.

Oneil Cruz is going to be an animal, or perhaps even a unicorn, given that he’s 6’7” and still playing shortstop somehow. He’ll move to the outfield at some point, perhaps as early as next year and on the 20-80 scale, his arm should grade out as a 96.7.

At the dish, Cruz went 2-for-5 with a double, four RBI and two runs scored, en route to a Pittsburgh shellacking of the Chicago Cubs. He only struck out once, which is great! Strikeouts are going to be an issue for Cruz, as they’ve been rather present during his time in the minors, but the power is real, the speed is real, and he won’t be hitting sixth for long in this lineup. Ke’Bryan Hayes’ and Bryan Reynolds’ owners should be jumping for joy that there will be more help in the lineup. Also in this game, rookie Bligh Madris went 3-for-4 with two RBI, one run scored and a stolen base in his MLB debut.

Hopefully Jarren Duran is here to stay with the Red Sox this time, because the fantasy production could be excellent for Duran atop the Boston lineup. He was excellent yesterday against Detroit, going 2-for-3 with a double, two runs scored and his first two stolen bases of the season. The speed has always been there, and he’s been productive on the base paths, going 27-for-32 on stolen base attempts in Triple-A between the 2021 and 2022 seasons. There’s enough pop in that bat to be a 15+ homer guy in the majors, and when you pair that with a .245+ batting average and 18+ stolen bases atop that lineup, you can easily see the attraction in fantasy baseball setups. We haven’t seen it yet, as Boston has faced a lot of righties, but do they let Duran play and lead off against a southpaw? At the Major League level in his career, he’s just 5-for-32 with 12 strikeouts against lefties.

Gerrit Cole is just doing Gerrit Cole things. He took a no-hitter into the eighth inning, and he struck out 12 batters over 7.1 innings of work. Cole has dominated the Rays this year, but this outing was no doubt his best, and his 12 strikeouts were a season high. This dominant outing lowered his ERA to 3.14 on the season, pushed his record to 6-1, and he has seven or more strikeouts in seven of his last nine outings. The ace in the Bronx is back, and back in style.

Max Fried versus Logan Webb most certainly did not disappoint. Each pitcher allowed just one earned run over seven innings of work, with the two combining to allow just 11 hits and striking out 15 batters (7 for Webb, 8 for Fried). Webb posted a 25 percent whiff rate in the contest, headlined by his slider and sinker both generated a whiff rate of at least 25 percent, whereas Max Fried’s slider and changeup generated whiff rates of 36 percent and 57 percent respectively.

This was a great outing for Webb on the road, as he’s been better in his own home park, and Max Fried’s commitment to his changeup is paying dividends. After throwing it less than five percent of the time in each of the past three seasons, he’s throwing it more than ever before, and that pitch has generated a .186 batting average (.197 xBA) and a 36.9 percent whiff rate.

Manny Machado seems to have avoided a trip to the injured list for now, but CJ.Abrams has a real chance to stick with the team moving forward. While Machado is out, the flexibility that Jake Cronenworth and Ha-Seong Kim provide to San Diego will allow Abrams to get everyday at-bats, or very close to it. The production at the Major League level thus far has been average, posting a .225 average and .668 OPS, but he does have four home run and four stolen bases. Prior to rejoining the team, Abrams was slashing .371/.400/.565 with three home runs, 14 runs scored, 10 RBI and five stolen bases through 62 June at-bats at Triple-A El Paso.

Anthony DeSclafani will make his return to the mound for the first time since allowing five earned runs to the New York Mets back on April 21st. The San Francisco righty had a rough start to the year, posting a 6.08 ERA through his first three starts. He had a rather short rehab stint, so don’t be surprised if he’s fairly limited tonight, and only gives the Giants a handful of innings.

Well, if this doesn’t perfectly summarize Yoán Moncada’s season, I don’t know what will. He’s had a rough 2022 season to date, but he went 5-for-6 back on June 15th, and that one game alone accounted for nearly half of his hits in the month of June. However, he left early two days later, and is now heading to the IL with a right hamstring strain. Tough blow for Moncada.

Aaron Ashby left his last start with forearm tightness, but it was reported that he would be good to go for tonight’s start after completing his bullpen over the weekend. Well, I guess something didn’t go right, as Ashby now heads to the injured list. The team is hopeful it’s just fatigue and he’ll continue throwing, so it may be the minimum required time on the shelf for Ashby. Despite a 1-5 record on the year, Ashby has a 4.25 ERA and a 10.96 K/9 across 55 innings of work.

You can get the strikeouts at an even five on PrizePicks, but +115 on BetMGM isn’t too bad, considering that Ryan Feltner has at least six strikeouts in each of his three road starts this year and in four of five for the year as a whole. There’s plenty of swing and miss in that Miami lineup, and the Marlins have the third highest strikeout rate in Major League Baseball over the last two weeks. Feltner is away from Coors, which is a plus, and he posted seven strikeouts in seven solid innings earlier this season against this club.

Over the last two weeks, the Pirates have the second-highest strikeout rate in baseball and the Cubs have the 11th-highest rate. Also during this stretch, Pittsburgh has the league’s worst batting average at .202 and Chicago is also in the bottom 10 coming in at .234. These two teams have the lowest wRC+ over the last two weeks in all of baseball and they both rank in the bottom-seven in terms of wOBA. In this 14 game span, the Cubs are averaging just 2.7 runs per game, and Pittsburgh is at 3.4 runs per game, largely due to their 12 run outburst yesterday. Prior to yesterday, they were at just 2.8 runs per game between June 7th and June 19th. In short, both pitchers in this matchup should be productive, and when things go wrong for these lineups, they go very, very wrong.