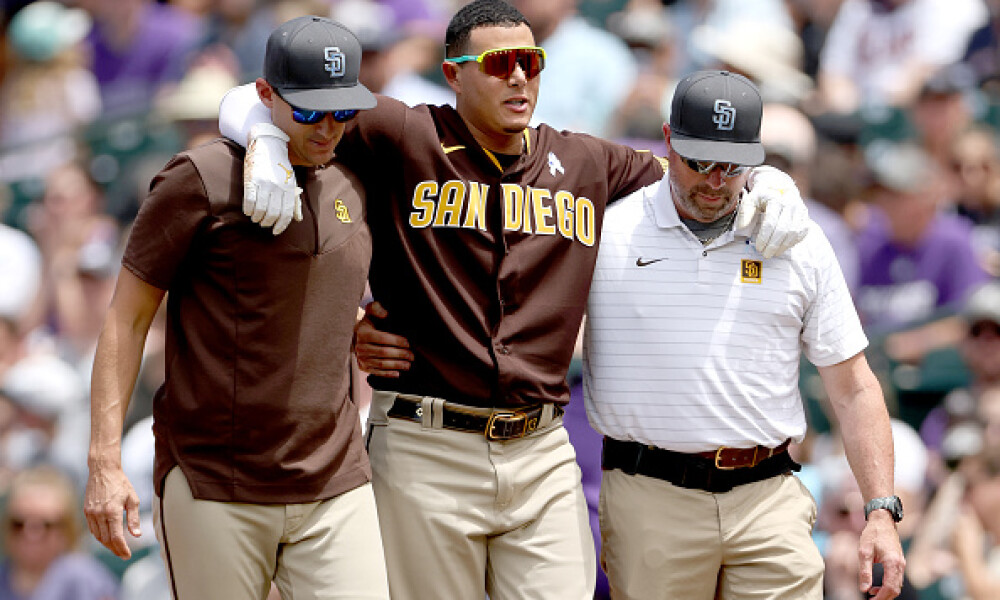 Just call him the King of Seattle. Mike Trout has hit five home runs in five games against the Mariners, which includes yesterday’s go-ahead bomb in their 4-0 win at T-Mobile Park. Trout is the first player in MLB history to hit four game-winning home runs in a single series. The Los Angeles Angels outfielder also tied Rafael Palmeiro for the most career homers against the Mariners with 52. Plus, his 33 bombs at T-Mobile are the most by any visiting player.

The Pittsburgh Pirates' Jack Suwinski hit three home runs, including a walk-off in the bottom of the ninth, to beat the Giants on Father's Day. He became the second Pirate rookie to hit three homers in a game since Andrew McCutchen. The rookie is now slashing .230/.296/.486 with 11 HR and 19RBI on the season.

Miami Marlins prospect Jerar Encarnación hit a go-ahead grand slam in his MLB debut yesterday which helped the Marlins come back and beat the Mets, 6-2. He also became the first MLB player to ever hit a grand slam, steal a base, and get an outfield assist in his first major-league game – and just the ninth whose first hit was a grand salami. With Jesús Sánchez, Jesús Aguilar, and Brian Anderson all on the Injured List, the Marlins should give Encarnacion a few more chances to perform magic this week.

Buddy Kennedy, the Arizona Diamondbacks 21st ranked prospect, hit a 91 mph fastball for his first major league home run yesterday – and it just happened to be a grand slam! The blast gave Arizona the win in the rubber match of their series against the Twins. One other thing. Kennedy is from Millville, NJ. Does that name sound familiar? It should be because it's also Mike Trout’s hometown. Kennedy and Trout are friends and workout partners in the offseason and Kennedy is also the grandson of former Milwaukee Brewer Don Money.

Matijevic launched a home run into left field on Sunday for his first hit in the major leagues. The Houston Astros' rookie was hitless in his first eight major league at-bats, so this one was something special.

Nick Pivetta Turning Into An Ace

Boston Red Sox right-hander Nick Pivetta is putting the team’s pitching staff on his back. He threw another gem yesterday, allowing only one hit and striking out 10 batters in the Red Sox's 6-4 win over the St. Louis Cardinals. Over his last nine starts, Pivetta is 7-1 with a 1.77 ERA and 0.84 WHIP with 61 strikeouts. Plus, he has now only allowed three earned runs or less in 10 of his last 11 starts to bolster a hurting Boston pitching staff.

San Diego Padres star and National League MVP candidate Manny Machado left yesterday’s game in the first inning with a left ankle sprain. X-rays were negative, but the Padres will have to wait for the swelling to go down and more treatment before they have a timetable for a return. Machado is having a huge season, hitting .328 with 12 home runs, 46 RBI, and seven steals in 65 games. He has put the team on his back since Fernando Tatis Jr. went down with an injury prior to the start of the season.

Andrew Heaney returned to the Los Angeles Dodgers rotation in style, allowing five hits and striking out seven batters yesterday against the Cleveland Guardians. This is exactly the good news that the Dodgers need after losing Walker Buehler for 6-8 weeks to injury. Besides the injury hiccup, Heaney is having a fine start to his season in Los Angeles with a 0.59 ERA/0.85 WHIP  and 23 strikeouts in 15.1 innings.

Pitching is LOADED tonight. It is still early but a “game stack” of Shane McClanahan (TAM) and Gerrit Cole (NYY) is tasty looking. Cole is the top overall arm and gets the support of the No. 1 offense in baseball. He just beat this Tampa team six days ago and comes into the game with a 33.9% K rate over his last five games.

Want to load up on bats? Noah Syndergaard is cheap on all sites tonight and comes in as a heavy favorite over the Royals. Besides two bad starts, “Thor” has been great this season and the Royals have a low .297 wOBA against right-handed pitching. He may not be the pitcher that he once was, but Syndergaard is still useful in certain matchups.

Boston faces Detroit Tigers starter Alex Faedo, who is coming off a seven-run, nine-hit, three-inning bombardment by the White Sox. He has an xFIP of 5.05 and is not missing many bats with a sub-20% strikeout rate. All Red Sox hitters are in play, especially Rafael Devers (.323 ISO/.401 wOBA), J.D. Martinez (.231 ISO/.373 wOBA), and value bats like lefty-hitting Jaren Duran.

The Angels get a treat tonight by facing Kansas city starter Kris Bubic, who has allowed at least three runs in each of his past two starts and six of his last eight. With a 6.75 ERA/1.75 WHIP over his last five starts, Bubic will run into major trouble with the red-hot Mike Trout, Shohei Ohtani (.292 ISO/.355 wOBA), and Tayler Ward (.176 ISO/.361 wOBA).