Fantasy Baseball June 14 Round Up: Huge Blow to the Braves as Ozzie Albies Breaks Foot 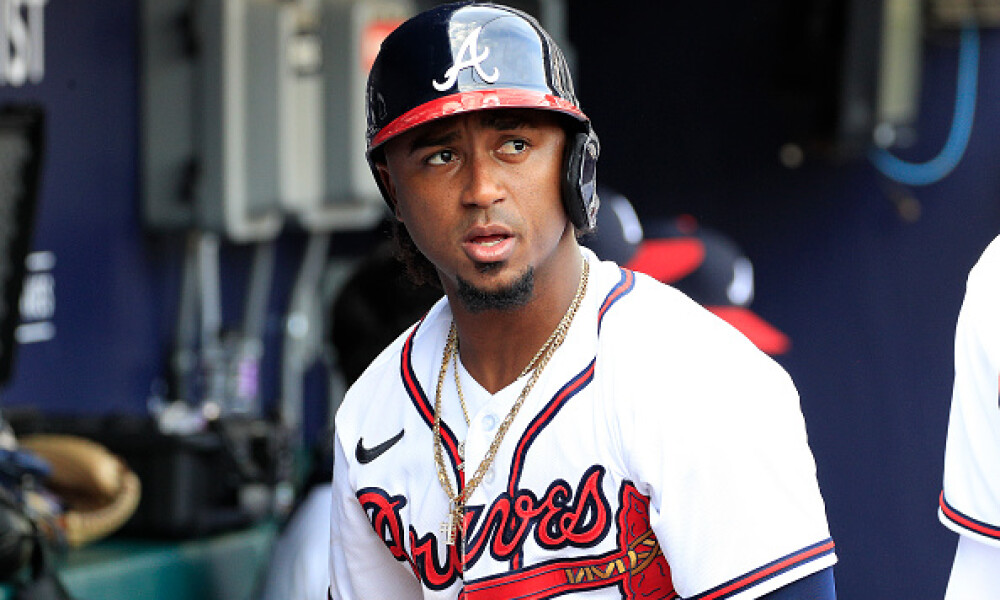 Yesterday’s Major League Baseball action was full of noteworthy news, including injuries, return from injuries, win streaks, and standout performances. The Atlanta Braves extended their win streak to 12, but Ozzie Albies fractured his foot, which will likely cause him to miss a good bit of time. Detroit Tigers’ Eduardo Rodriguez was placed on the restricted list, while Washington Nationals starter Stephen Strasburg was placed back on the injured list after making his 2022 season debut. We also got some non-injury related news, in that the league upheld Josh Donaldson’s one game suspension, as well as efforts to mitigate bench-clearing incidents in the minors. There was some positive news, however, as Byron Buxton etched his name in the record books and Vladimir Guerrero Jr. is coming around and living up to the hype of his near-the-top of the league fantasy baseball preseason ranking. Don’t forget to check out our updated June fantasy baseball player rankings and be sure to check out the latest MLB injury report and fantasy baseball waiver wire top targets to remain one step ahead of your friends and foes in your fantasy baseball leagues. After examining yesterday’s top performances, key injuries, and noteworthy items, we’ll also take a look at today’s baseball action for my favorite bets and player props for Tuesday, June 14th.

It’s hard to ignore the major loss within the Braves’ 12th-straight win last night. Ozzie Albies left the game with a fractured foot and his timetable is unknown at the moment.

Albies was enjoying another productive season, slashing .244/.289/.405 with eight home runs, 33 RBI, 34 runs scored, and three stolen bases through his first 62 games of the season. During this win streak, the Braves are averaging nearly seven runs per game, while holding their opponents to less than three runs per game.

After just 10 innings in rehab starts, Lance Lynn made his 2022 season debut for the White Sox and fantasy baseball managers alike. He allowed three earned runs on 10 hits with four strikeouts across 4.1 innings of work, and allowed seven batted balls over 95 miles per hour. His velocity on his pitches was a bit down, but honestly, you had to expect that a bit, but his fastball generated a hearty number of whiffs, and his three primary pitches all posted a 24% or higher CSW%, which is solid. While we would have liked to see him dominate a weaker Detroit lineup, there’s going to be some rust that needs shed, but if an impatient fantasy baseball manager is ready to deal Lynn after this, jump on the opportunity. From 2019-2021, Lynn posted a 3.26 ERA and 10.24 K/9 across 449.1 innings of work.

Byron Buxton Puts His Name in the Record Books

I mean, seriously, what can’t this guy do!?

Sure, Byron Buxton only hitting .236 on the year and has just one stolen base, but he’s swatted 18 home runs this season, and has hit 44 home runs since grounding into his last double play. He’s been white hot of late, too, hitting six home runs in his last 26 at-bats, posting a 1.077 slugging percentage during that span. The naysayers will say it is time to sell high with the oft-injured outfielder, but don’t let anyone use his injury history against you in a trade. Oh, so you just get to keep the guy for the time being while he’s white hot? Darn.

Stephen Strasburg Back to the IL

And just like that, the Nationals are without Stephen Strasburg in the rotation. There was some discomfort after a bullpen over the weekend, and while we don’t know where said discomfort was, it warrants another trip to the injured list. Is it related to the thoracic outlet surgery? Is it related to the fact that he’s had multiple issues since firing a career high 245.1 innings in the 2019 regular season and postseason run? The game is better with a healthy Strasburg, so hopefully this stint on the IL isn’t a lengthy one.

Just as it looked like the Detroit Tigers were going to get their prized offseason acquisition back in the rotation, instead of adding him into the rotation, they added Eduardo Rodriguez to the restricted list. There is not a lot of information on the matter, but he will not be rejoining the team for the foreseeable future. The former Boston southpaw made eight starts for the Tigers, posting a 1-3 record with a 4.38 ERA and 7.85 K/9 before hitting the injured list with a left rib cage strain. His return looked imminent, too, as he racked up nine strikeouts across four shutout innings in his last rehab start.

Vladimir Guerrero Jr. was in an excellent spot yesterday and he didn’t disappoint, going 3-for-5 with a home run, three RBI and two runs scored. To further accentuate his performance, he posted the three hardest hit balls in the game. 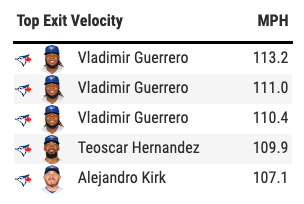 Is this cheating? It feels like it’s cheating. The Blue Jays are hitting a league-best .322 over the last two weeks, and the next closest team is the Yankees at .299! Baltimore’s Jordan Lyles is 2-4 with a 6.69 ERA on the road this season, and allowed a .309 BAA and 1.68 WHIP in his seven road starts. Meanwhile, the Orioles have the eighth-lowest batting average over the last two weeks and the eighth-lowest average against lefties overall in 2022.

No team in baseball has a higher strikeout rate versus right-handed pitching than the Angels, coming in at 25.9 percent, and over the last two weeks, the Angels are tied with the Pirates for the league’s worst strikeout rate at 28.3 percent. Gonsolin is 4-0 with a 1.00 ERA in five home starts this season, and Gonsolin has at least five strikeouts in eight straight starts. In three of his last five outings he has seven strikeouts! In 12 games in the month of June, the Angels have seven games as a team with double-digit strikeouts, including in each of its last four contests. For heaven’s sake, Taijuan Walker just racked up 10 strikeouts against the Angels, and he had just one other double-digit strikeout appearance since the start of the 2018 season! Take the over.