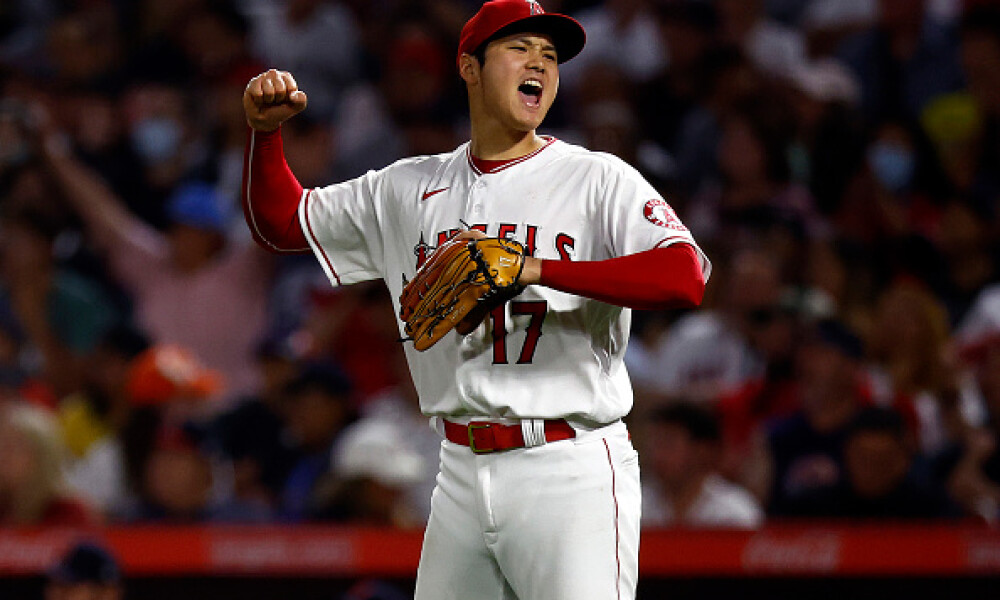 Thursday’s Major League Baseball action was full of MLB news and performances that kept fantasy baseball managers on the edge of their seats. Shohei Ohtani single-handedly brought an end to the Los Angeles Angels' losing streak with his arm and bat. Meanwhile, Joey Gallo blasted two home runs in a big New York Yankees comeback after a Gerrit Cole shelling. Plus, Toronto Blue Jays top prospect, Gabriel Morenos, finally got the call and will be a popular fantasy baseball waiver wire add. There are also some updates on the latest MLB injury report to note before setting your fantasy baseball lineups tonight. Cincinnati Reds catcher Tyler Stephenson headlines that list with his recent injury. Check out the updated fantasy baseball rankings for June and MLB projections to help set your lineups as well. We'll also take a look at the MLB DFS top picks for tonight's games. Keep an eye on the latest MLB weather report and MLB lineups before building daily fantasy baseball lineups. Let's now take a look back at some of the MLB top performances and injury news from Thursday before glancing ahead at Friday's action.

Ohtani single-handedly pushed “restart” on the Angels season last night. He pitched magnificently, averaging 98 mph and topping out at 101, while striking out six in seven innings. Even better, the two-way star hit the go-ahead two-run home run to give the Angels the lead and ultimately snap the 14-game losing streak – the longest in team history.

Gabriel Moreno Gets the Call

With Danny Jansen landing on the Injured List, the Blue Jays have called up top catching prospect Gabriel Moreno for this weekend’s series with Detroit. Moreno was the seventh-ranked prospect by MLB.com and Baseball America at the start of this season. Moreno saw his stock soar in 2021 after a huge season at Double-A, where he slashed .373/.441/.651, and also impressed in a short stint at Triple-A and the Arizona Fall League. This season he was hitting .323/.377/.406, which was enough to impress the Jays for his first big-league call-up.

Muncy didn’t waste any time in his return. After going on the Injured List with elbow discomfort (and maybe some time to just clear his head), the Dodgers' veteran came back with a vengeance. The calls that he is “washed up” were silenced at least for a day as the former All-Star infielder hit a three-run home run and drove in five runs in the Dodgers 11-9 win over the White Sox. If Muncy is fully back, then NL West needs to take note because the all-powerful Dodgers just became even better.

Last night’s game between the Yankees and the Twins seemed like it was a tale of two games.

With Yankees ace Gerrit Cole on the mound as a heavy favorite, the Twins started the game with back-to-back-to-back home runs from Luis Arraez, Byron Buxton, and Carlos Correa. Just because it was against Cole makes it a feat in itself, but this was actually the first time in Twins franchise history and only seventh time in MLB history that a team has opened a game with three straight home runs. Cole ended up allowing five runs in less than two innings after entering the game with six allowed in 64.2 innings on the entire season. Plus, he previously had a 3-0 record and 0.95 ERA in his career against the Twins.

Joey Gallo night. After surrendering all of those home runs, Gallo told Cole, “We got you,” and they sure did. When it was all over the Yankees had won for the eighth time in nine games and Gallo was the star after hitting two blasts in the game.

Cincinnati Reds catcher Tyler Stephenson has been having an All-Star type of season. In 42 games, he is batting .305 with a .829 OPS, five home runs, and 31 RBI as well as leading all National League catchers in batting average, slugging percentage (.468), and RBI. An All-Star game appearance will now have to wait after Stephenson fractured his right thumb from a foul tip in the fourth inning of yesterday’s 5-4 loss to Arizona. He is expected to miss four to six weeks.

Mike Trout Sits But No IL

Trout was not in the Angels' lineup Thursday night against Boston with a groin injury. It was his second game missed after being removed from Tuesday’s contest. The latest reports are that Trout will not require an Injured List stint and should be back in the lineup soon. Juan Lagares has taken over in centerfield and the lead-off spot but will have minimal fantasy impact unless Trout really does land on the IL.

The ailing Mets rotation is about to take its first step to being healthy again. Tylor Megill will come off the Injured List today and start the series opener against the Angels in Anaheim – his first game since May 11 when he was sidelined with biceps inflammation. Max Scherzer and Jacob deGrom are still a few weeks away from being back in a big-league stadium, but Megill could really give the Mets a shot in the arm if he can pitch as well as he did over the first month of the season. He made a rehab start on Sunday for Double-A Binghamton and is reportedly stretched out to 70-75 pitches tonight. Across his first six starts of the MLB season, Megill had a 2.43 ERA with 36 strikeouts in 33.1 innings.

Shane Baz Back In The Bigs

Shane Baz, the top prospect in the pitching-rich Tampa Bay Rays organization, will finally make his season debut on Saturday against the Twins at Target Field. Baz has been out since Spring Training after undergoing surgery on his right elbow but looks ready to roll after a successful Minor League rehab assignment. His last start was on Sunday when he struck out 10 over 4.1 innings on 79 pitches. The Rays optioned Ryan Yarborough to make room for Baz.

Andrew Kittredge Back On IL

The Rays' 2021 All-Star returned from the 15-day IL on Sunday after missing two weeks with back tightness. Kittredge made two appearances this week and after allowing a run on Tuesday night, he could not extend his arm. Reports are that he will need the same procedure on his elbow that teammate Shane Baz recently had and will likely miss at least another month. The Tampa Bay relief staff is resembling a MASH unit with J.P. Feyereisen, JT Chargois, and Nick Anderson still out.

White Sox star outfielder Eloy Jiménez saw his Triple-A rehab assignment ended on Thursday by what general manager Rick Hahn described as “normal leg soreness." Today marks six weeks since Jimenez’s torn hamstring tendon surgery and instead of returning to the White Sox roster next week, it looks like he will be starting a new rehab assignment. He could play again as soon as Tuesday on the new assignment.

Be sure to check out DFS Alarm all day if you're looking to play MLB DFS lineups tonight on DraftKings, FanDuel, and Yahoo Fantasy. Stay tuned for the MLB DFS Playbook, core plays, value vault, and more! Also, check out Fantasy Alarm later today for some MLB player props on Underdog Fantasy and PrizePicks. Finally, keep an eye out on the Fantasy Alarm MLB Discord channel for Howard Bender's FREE Best Bets for today's games.

Tonight’s MLB DFS slate is rich with good pitching, but Joe Musgrove is the favorite of the group. With a quality start in each of his 10 outings, Musgrove has been locked in and is sporting a 1.64 ERA and 0.92 WHIP on the season. He is home at pitcher-friendly Petco Park against a Colorado offense that is striking out 22.2% with a 12.7 SwStr% against right-handed pitching. Musgrove is viable in all formats tonight.

Triston McKenzie has an elite matchup against the weak-hitting Oakland A’s. Oakland has a 23.4% strikeout rate to right-handers with a .130 ISO/.273wOBA. Despite struggling in his last start McKenzie still has a 3.10 ERA/0.86 WHIP on the season. José Berríos is another top arm tonight after striking out 13 Twins over seven innings in his last start. It’s been an up and down season for the Jays right-hander but tonight he faces a Detroit team that is striking out 25% to righties but him in line for another big strikeout game.