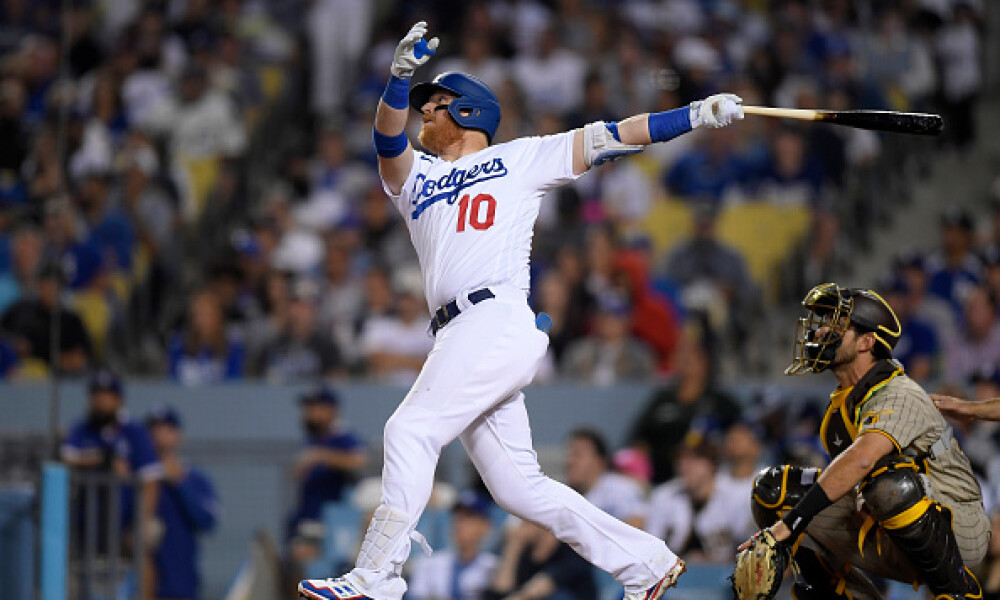 It’s now July, so happy Bobby Bonilla day to all those who celebrate! Thursday’s Major League Baseball action was full of all kinds of highlights and MLB top performers that kept the fantasy baseball world abuzz as we get ready for another big weekend. We had a triple-homer day from one of the most unlikely sources – Michael Perez of the Pittsburgh Pirates – and a double-dong from Los Angeles Dodgers veteran Justin Turner. The fantasy baseball MLB news also includes Cincinnati Reds first baseman Joey Votto continuing his dominance over a certain Cubs pitcher. Plus, Manny Machado made his return to the San Diego Padres lineup as he headlines the latest MLB injury report updates before setting your fantasy baseball lineups. Be sure to check out the updated July fantasy baseball rankings as well to help win your leagues. Also, pay attention to the top fantasy baseball waiver wire targets and the recent MLB prospect reports for more roster help. After we look back at yesterday's fantasy baseball headlines, we'll glance ahead to Friday's MLB DFS top plays. Use the MLB daily projections, today's MLB weather report, and the confirmed MLB lineups to help build those daily fantasy baseball lineups. Keep it locked on DFS Alarm as well as you set MLB DFS lineups tonight. Now let's look at the fantasy baseball top performers, injuries, and more to help you win!

Michael Perez, the Pirates' 29-year-old catcher, came into last night’s game with only 12 career home runs dating back to 2018. When the night was over, his resume read 15 blasts. Yes, a three-home run game from the least likely guy in Pittsburgh's lineup. To make things even crazier, the Pirates became only the second team in MLB history to have players hit three home runs in back-to-back games as Bryan Reynolds was coming off a career night on Wednesday. They joined Marcell Ozuna and Adam Duvall from the Atlanta Braves, who also achieved the feat back in 2020. But that’s not all of it, as the Buccos also became the first team in major league history to have three different players record three-homer games in the same season as Jack Suwinsky achieved the feat on Father’s Day.

Justin Turner did his best to match the big night of Michael Perez but fell a home run short in the Dodgers' series-opening 3-1 win over rival San Diego. It was still a double-dong night and must have been a huge sense of relief for the veteran who has struggled at the plate all season. It was Turner's first blast since May 18th and the 13th multi-home run game of his career. The Dodgers third baseman is only slashing .227/.298/.375 with a .673 OPS, but this may be the jump start that the notoriously slow starter needs to get back to business for the second half of the season.

Patrick Wisdom of the Chicago Cubs also crashed the multi-homer party last night. Wisdom hit a grand slam at Wrigley Field off Graham Ashcraft and then added another homer in the sixth inning in the Cubs' 15-7 thrashing of the Reds. Wisdom is now slashing .232/.315/.475 with 16 home runs and 43 RBI this season. His 92.7 mph exit velocity and 52.5 hard-hit percentage are also in the top 5% of all of baseball.

Philadelphia Phillies rookie Darick Hall joined the double-dong group last night as well. Hall was recently recalled from Triple-A to help fill the power void left by Bryce Harper – and he did not disappoint last night. He went yard twice from the cleanup spot in the Phillies' 14-4 win over the Braves.

Ramón Laureano broke out of a home run slump in a big way last night with his own two-homer game. The Oakland Athletics outfielder took Logan Gilbert deep in the fourth inning and then hit another blast in the ninth off Seattle closer Paul Sewald. It wasn’t enough as the A’s lost 8-6, but it was good news for Laureano as he had just two homers in his last 46 games before Thursday's breakout.

BVP Is Real for Joey Votto vs. Kyle Hendricks

There are two schools of thought regarding Batter versus Pitcher stats. One is that they are useless, and the other is that BVP is a real thing. Well, it was pretty real when Paul Goldschmidt would face Tim Lincecum and compiled a career .542/.536/1.458 slash with a 1.994 OPS in the matchup. And it sure is real when Joey Votto faces Kyle Hendricks of the Chicago Cubs. The Reds' first baseman is now 17-for-41 lifetime off of Hendricks with six home runs after going 2-for-3 with another bomb last night. Votto even found time to make a new friend at Wrigley while he was smashing Hendricks.

Cleveland Guardians with Another Walk-Off

First, we had Josh Naylor’s walk-off home run on Wednesday and then Andrés Giménez repeated the feat less than 24 hours later to give the Guardians a 5-3 win over the Twins. Over the last 10 days, the Guardians have won four games against the Twins in the eighth inning or later after trailing by at least two runs – the first time the feat has been accomplished since 1974 when the Tigers did it against this same Cleveland organization.

Red Sox left-hander Chris Sale was dominant in his Double-A rehab start on Thursday. In his first real action since the rib-cage stress fracture, Sale struck out seven batters on 52 pitches (36 strikes). He threw numerous pitches in the 95-96 mph range and looks well on his way to his much-anticipated return to the Red Sox pitching staff.

The news couldn’t have been any sweeter to the Padres as NL MVP candidate Manny Machado returned to the lineup on Thursday. He missed nine games with an ankle sprain, an injury that at first was thought to be much more serious than it was. Machado ended up going 1-for-4 on the night with a double and run scored and is now slashing .327/.398/.545 in one of his best-hitting seasons yet.

Brewers right-hander Adrian Houser left last night’s game against the Pirates after just 2 1/3 innings with right elbow tightness. Manager Craig Counsell told reporters this morning that Houser will be needed to be placed on the Injured List and will have an MRI today to determine how much time he will miss.

There are two elite arms on tonight’s slate – Corbin Burnes and Gerrit Cole. Both have been pitching outstanding and both can be used tonight in MLB DFS lineups, but the edge goes to Burnes due to the matchup. The Pirates have been hitting (see Michael Perez above) and are much better than they were a month ago, but this is still Burnes – the elite arm of the National League. With a 17% swinging-strike rate and 32% K rate, he should have no problem mowing down an offense that strikes out 25.2% of the time (second-worst in baseball).

There are a few times a year where Marco Gonzales is in play in MLB DFS, and tonight is one of them as a top value pitcher. The Mariners' lefty faces an Oakland team that we have been picking on all season and the game is in pitcher-friendly T-Mobile Park. The Athletics really struggle against southpaws and Gonzales has now made four straight starts where he has limited his opponent to two or fewer runs. With a manageable 3.31 ERA and 1.31 WHIP, Gonzales is in play in the value range of pitchers. You could also consider Pirates rookie Roansy Contreras in GPPs and White Sox vet Lance Lynn, who is now stretched out and seeing his velocity return after his first three starts.

You roster right-handed bats against Spenser Watkins and the Orioles. Watkins is a reverse-splits pitcher that can get pounded on the right side to the tune of a .291 ISO/.403 wOBA with a flyball rate over 50%. Start all of your Minnesota Twins stacks with Byron Buxton (.323 ISO), Jorge Polanco (.186 ISO), Carlos Correa (.189 ISO), and Gary Sánchez (.238 ISO).

There is a game at Coors Field tonight and Arizona bats will be popular against Rockies gas can Antonio Senzatela – so let’s try to be different than the masses and look at the Giants. White Sox veteran Lance Lynn is still working his way back from injury and has been hit hard in his three starts since his return. He has allowed 20 hits in 16 innings and 11 earned runs plus will now be facing an always solid Giants lineup. Start your stacks with righty-killing left-handed bats of Joc Pederson (.315 ISOO/.393 wOBA), Brandon Belt, and Mike Yastrzemski (.360 wOBA) – along with reverse-splits hitting Evan Longoria (.246 ISO).