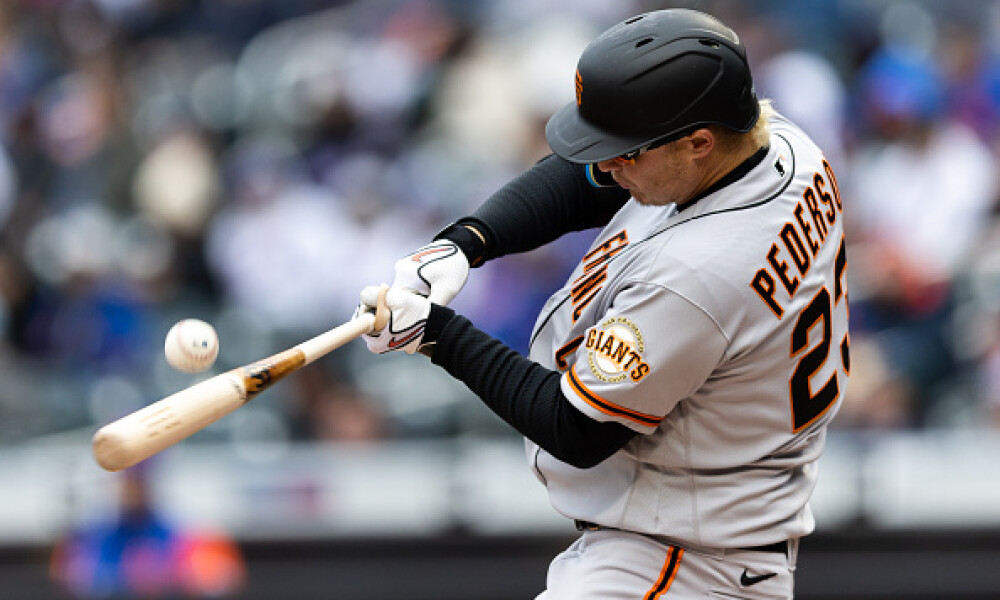 Fantasy baseball managers everywhere, let out a big sigh of relief! Based on this weekend's offensive output, the position players around the MLB have heard everyone talking about how runs are down. On Sunday alone, we had three teams put up 10-plus runs and five games total scoring at least 10 runs. With this offensive outburst in mind, let's review Sunday's biggest MLB headlines before looking ahead to Monday's action in today's Fantasy Baseball Daily Round Up!

To say Joc Pederson has enjoyed his time in San Francisco to this point is seemingly an understatement. He’s been fantastic, even before Sunday, but yesterday was his best game as a Giant to date. Leading off, Pederson went 3-for-3 with two home runs, three runs scored, and three more runs driven in.

Well, I think it’s safe to say when Minnesota Twins outfielder Byron Buxton is healthy, he’s one of the most exciting players the baseball. Period. “When he’s healthy” is the key there, but right now, there is no doubt he’s just that. He blasted a two-run home run in the seventh inning to tie Sunday's game, and then took a 3-1 offering from Liam Hendriks out to deep left for a walk-off, three-run home run.

Buxton’s played in only 10 of the Twins’ 16 games this year and leads them with six home runs, which is tied for the MLB lead, and his 11 RBI lead his team. His fantasy owners are loving life right now, but are also chewing on their fingernails like corn on the cob wondering if he can just stay on the field. If he does, we see what he can do.

Not only did Eric Lauer not allow any runs to a potentially potent Phillies lineup, but he also struck out a career-high 13! He had only struck out 10 batters in his first two starts combined this year and those came against much lesser opponents in Baltimore and Pittsburgh.

Before Sunday, Lauer had never even had 10 strikeouts in a major league game – let alone 13. He had more than eight just twice last season! Lauer's 14% swinging-strike rate on Sunday was also notably higher than his previous career-high of 10.6%. The high strikeout totals are not something we should come to rely on, but it is nice to see the year-to-year improvements in that category as he does in fact have a serious ability to miss bats.

Dare I say…Cody Bellinger is BACK?

It was frightening to watch the 2021 version of Cody Bellinger. It was just as horrifying to watch him take at-bats during Spring Training – but throw it all out the window! Bellinger hit TWO bombs on Sunday and now has four on the year. The four home runs he’s hit in the first 15 games of this season are more than a third of what he hit in 95 contests last year.

Bellinger's strikeout rate has actually ballooned higher than it ever has, so he’ll have to work that out. Still, the combination of power (four homers) and speed (three stolen bases) is presenting something to fantasy owners that he just hadn’t shown since 2019 – the year in which he was the National League MVP.

The value you could have gotten on Bellinger during the draft season is really paying off right about now. If the 33% K-rate subsides, things could only get better from here.

Are Merrill Kelly and Miles Mikolas for real?

This question is being asked combined because these two have not been this good in the past as they have this year. Kelly has his toughest test to date going up against the Dodgers on Monday, and he currently has a 28% K-rate. He’s never topped 23% in his career and his swinging strike rate is still just 9.4% – so the expectation is that the strikeouts may plummet soon.

Speaking about strikeouts, Mikolas has never had a high output of punchouts in his career but has 12 K's over his last 11.2 innings. If you think that’s something that will continue, I’m here to burst your bubble. The Mets strike out less than every other team in baseball as they have K’d  just19.6% of the time this season.

We have a LOT of big-time pitchers on Monday’s slate that will be fun to use in DFS and in the betting world. Max Scherzer faces off against a Cardinals offense that does not strike out a whole lot, ranking 28th in that category. Both Corbin Burnes and Walker Buehler are -190 favorites, which are tied for the biggest number of the night. Shane Bieber is actually an underdog as he travels to Los Angeles, but he's coming off the best start of his young year.