Fantasy Baseball August 5 Round Up: Mets Take Game One Over the Second Place Braves 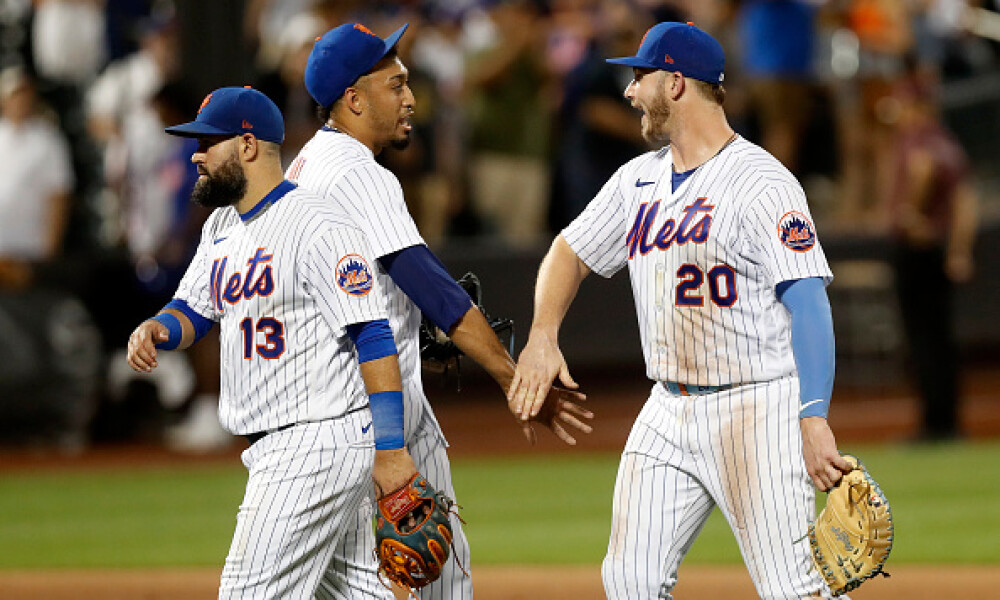 The second half of the major league baseball season is fully underway as we enter the weekend of Week 17. Before taking a look ahead at your fantasy baseball lineups for tonight and the rest of the weekend we first need to look back at the top MLB news and headlines from yesterday’s action. Highlights include the Mets taking the opener of the Battle for the NL East; the Angels going yard seven times yet still losing; another gem by ageless wonder Justin Verlander and an injury scare to Clayton Kershaw. Do not forget to check out our updated August fantasy baseball player rankings before setting your lineups this week plus the latest MLB injury report, fantasy baseball player spotlight series, and players trending up and down in the fantasy baseball stock watch. Before we start the weekend let’s take a look back at the top performances from yesterday as well as a look at my two favorite props for Friday night...

MLB News and Notes from Thursday

Led by the first six-out save of Edwin Díaz’s career the Mets beat the Braves 6-4 in game one of the battle for first place in the NL East. The game was also highlighted by Tyler Naquin’s double dong night – the first Met to go yard twice in his home debut and long balls by Pete Alonso and Daniel Vogelbach.  The wins put the Mets 4.5 games ahead of the second-place Braves in the NL East and at 67-38 have the second-best record in the National League.

Shohei Ohtani hit two bombs and his teammates hit five more, but the hapless Angels lost again, this time 8-7 to the A’s. The seven jacks set a franchise record of home runs in a defeat, topping the previous mark of six homers in a loss to Oakland in 1985. It was also just the sixth time any club had seven homers in a loss and the first since the Twins did it last year against the Tigers.

He is 39 years old and coming off major surgery that would force most his age into retirement. JV is not a normal pitcher, and the future Hall of Famer now sits at 15-3 with a league-leading 1.73 ERA and 0.85 WHIP after another magnificent win. Last night he threw 6.0 innings and allowed no runs on only two hits with five strikeouts in a 6-0 win over a tough Cleveland offense. Is this as good as JV has ever been?

We have a tale of two teams heading in different directions in the NL Central. The Cardinals swept a doubleheader against the Cubs yesterday while the Brewers lost to the Pirates 5-4 as both teams now sit tied on top of the division. Milwaukee is 5-5 over their last 10 games and did nothing to improve their playoff chances during the trade deadline- they actually unloaded All-Star closer, Josh Hader, in one of the biggest surprises of the entire season. Meanwhile, the Cards bolstered their pitching staff with the additions of veteran arms Jordan Montgomery and José Quintana. Quintana looked fabulous last night throwing six innings and only allowed one hit (a first-inning home run) and one run while striking out seven.

The good news- The Dodgers allowed only ten runs in a four-game sweep of the Giants, the first such sweep for Los Angeles in San Francisco since 1977.
The bad news- is Clayton Kershaw exited the game early due to yet another issue with his back and now the organization will be holding their breath as they await news. The Dodgers ace was throwing warmup pitches before the bottom of the fifth inning when he stopped and signaled to the dugout that something wasn’t right.

According to Blue jays reporter Keegan Matheson of MLB.com, newly acquired Whit Merrifield has been vaccinated and will be allowed to play in home games. Merrifield was one of 10 Royals that were placed on the restricted list during last month's series in Toronto.

I see a whole lot of upside for Eric Lauer tonight. He is home and not in the Reds home park- Great America “Small Park”- and facing a watered-down Cincinnati lineup. Lauer (7-3, 3.75 ERA/1,21 WHIP) is trying to win back-to-back starts for the first time since late May. He is coming off a decent start last Saturday where he allowed one run and four hits in five innings during a 9-4 win over Boston. I will run to the over here as he is facing a Reds lineup that is striking out 22.6% to left-handers and a crazy low .096 ISO.285 wOBA to LHP.