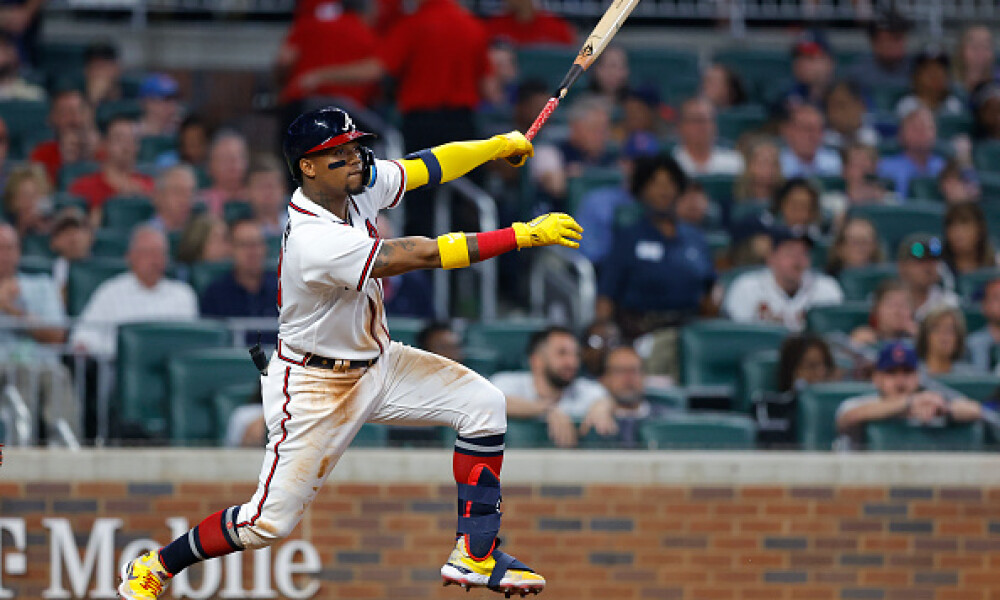 The Fantasy Baseball Daily Round Up gets off to a little bit of a late start today as most of the MLB news and injuries from Thursday have been covered already following a rash of day games. Say what you like about the MLB commissioner’s office, but at least they’re smart enough to realize that the 2022 NFL Draft takes center stage and throwing a 10-game slate to compete for TV ratings is an exercise in futility. So while we won’t do much recapping, this does give us an opportunity to look at some things a little differently today. We’ll continue to highlight the standout players, but because many of you are building fantasy baseball trade value charts or plugging names into some fantasy baseball trade analyzer program, we’ll also discuss things like market value for buy low, sell high fantasy baseball trades. Let’s get to it.

Ronald Acuna Flashes Speed During His Return to the Atlanta Braves

Well, that didn’t take long to quiet the doubters, did it? Just one game into the season, a mere five plate appearances, and already Ronald Acuna is in MLB’s top-30 for stolen bases in 2022. No, we’re not going to overrate a 1-for-5 with two strikeouts, but we are going to celebrate the two stolen bases he provided, especially after watching him fall in fantasy baseball drafts and hearing everyone run him down because they were worried he wouldn’t steal bases anymore following his torn ACL. But after watching him swipe three bags during his minor league stint to open the season and then to watch his aggressiveness on the bases during Thursday’s game, you have to be excited over what you’ve seen. Maybe he’s trying to do too much too soon in an effort to prove the doubters wrong, but the confidence with which he is playing leads me to believe that Acuna has no desire to change up his game, nor do the Braves believe he needs to. Will he swipe the 37 bags we saw in 2019? Probably not. But if we can get 20 steals from a guy who should also hit .280 with close to 30 home runs, that’s a huge win and an amazing value given where you probably drafted him. This is neither a buy low or a sell high. This is a hold and enjoy. The team will be careful with him early on, as evidenced by him not being in Friday’s lineup, but they’ll take the kid gloves off soon enough and he’ll be leading many a team to a championship.

When will the Boston Red Sox Bring Up Triston Casas?

We see the Red Sox making roster moves, but they aren’t the kind that get the juices of the fantasy baseball community flowing. We’ve been watching Bobby Dalbec struggle his way through the start of the season with a .154 average and have heard all the rumblings of a need for change. Travis Shaw certainly wasn’t the answer, even in a platoon, as he is 0-for-19 with seven strikeouts to start the season and the team is now designating him for assignment. Unfortunately, Casas isn’t quite ready yet. I do like him as a buy low candidate in deeper formats as the power potential is strong. He currently has three doubles, four home runs and 12 RBI through 71 at-bats, but with 22 strikeouts and a .225 batting average, the team wants the 22-year-old to hone his plate discipline before getting the call. It makes sense as the whiffs will only get worse when he levels-up, so if you are stashing him, keep him tucked away and look to more of a late-June promotion if he can cut back on the strikeouts. In the meantime, Boston is bringing up Franchy Cordero who has been playing some first base at Triple-A Worcester and is sitting on a .913 OPS with three home runs. He could find himself as the lefty bat in a first base platoon with Dalbec and might have some value in deeper formats.

When will the St. Louis Cardinals Bring Up Nolan Gorman?

The stats are incredibly impressive, are they not? Through 18 games and 70 at-bats for Triple-A Memphis, Cardinals infield prospect Nolan Gorman is slashing .343/.390/.800 with two doubles, 10 home runs and 15 RBI, leaving all the fantasy baseball prospect hounds wondering why he isn’t sitting on the big-league roster just yet. You might think that, like Casas, the 25 strikeouts are giving the team pause, but it’s actually more about maneuvering the major league roster. The club is not interested in having the 21-year-old work as a DH which means they would likely have to move Tommy Edman over to shortstop and bench the tandem of Paul DeJong and Edmundo Sosa. Sounds easy enough, right? Except for the fact that Cardinals manager Oliver Marmol is not quite there yet. The manager is going to give his veterans every chance in the world to shake off the slow starts at the plate likely caused by the truncated spring, but he’s also got to be mindful of St. Louis’ place in the standings and what they need from their players in order to win the NL Central. If I’m making moves for my team fantasy baseball team right now, I’m looking to move on from DeJong/Sosa and will be adding Gorman as a stash this week. If he keeps raking in Triple-A, they’re simply not going to be able to hold him back any further.

Someone actually asked me earlier in the week if I thought Stott would be a good buy low candidate now that he’s been demoted to Triple-A Lehigh Valley. The short answer is no. I’m sure the Phillies will bring Stott back up at some point and there is a chance he performs better during his second go-around, but the real question is – if he does play in the majors, what exactly is he providing for fantasy? The power is probably league-average at best. The speed may be a tick or two below that. We don’t have a whole lot to go on right now, but Stott strikes me as the type of guy who is a better reality player than he is for fantasy and as a result, I’m not al that interested in him. Maybe if I’m strictly looking for batting average/OBP help, but you need a guy who is going to stuff the stats sheet in more than just one category. He’s just no that guy, or at least he isn’t right now.

Taylor Ward is getting the opportunity for the Los Angeles Angels right now as Jo Adell struggles through his early-season woes, but I see the 28-year old more as someone playing over his head than someone who is a late-bloomer. Monitor the situation for now.

Anyone really believing this .415 average for Eric Hosmer? Not me. Two homers, sure, but with a .472 BABIP, Hosmer’s average is a stat waiting to correct itself. While Luke Voit sits on the 10-day IL, Hosmer will continue to see the at-bats, but as the season progresses and the rest of the team gets healthy, things will start to normalize.

Anyone hitting .155 through 75 at-bats has to be scaring the bejeezus out of you, amirite? Max Muncy has never been one to hit more than .250, so while he will go through a big stretch where he could hit close to .300 for a little while, it’s not something we’re really counting on., Instead, it’s the lower strikeout rate and increased walk rate that excites us. We know he can and will hit for power, but if Muncy can continue to improve this plate discipline, we’re going to see some really nice stretches of play at the plate. If you can get him now, you just might catch the upwards trajectory.

If it’s big power you covet, then buying low on Big Franmil Reyes is the direction you should take. The Guardians started off hot, but have recently slumped as a team and while we don’t hold them in high regard overall, there’s no way Reyes continues to strike out over 40-percent of the time and he isn’t going to post this horrific .222 BABIP either. I mean, the guy has a career .310 BABIP, so you know he’s going to start getting into a groove once the weather clears up. The key is to acquire him before the next batch of home runs. He hits them in bunches and once he starts, the price tag is going to soar.

With five home runs, 15 RBI and even a stolen base, Jurickson Profar is stuffing the stat sheet pretty well for fantasy owners. Don’t sweat the .210 batting average as the .186 BABIP will correct itself and he should settle in somewhere around the .250-.260 mark. The biggest concern coming in was whether he would see enough at-bats to be relevant and I think we’re getting our answer here. His versatility in the field is going to help and if he can continue to hit for power, the Padres will have no choice but to play him every day.

If you remember last year, Jim Bowden and I were big fans of Ty France and that opinion has not wavered at all this year. In fact, I think I like him even more this season, especially with that multi-position eligibility. You won’t get a .300-plus batting average all year, but this is definitely a 25-homer bat that can hit .280 or better on the year.

Who doesn’t love picking on a team with a -35 run-differential? The Pirates have not only lost three of their last four by a combined score of 41-15, but now they’re throwing righty Zach Thompson whose 10.80 ERA has pushed them so far out of games early that recovery has not been an option. Meanwhile, the Padres have won three-straight and have averaged eight runs per game over that span. Yes, those games were in hitter-friendly Cincinnati, but they are locked in and should see the ball well coming out of Thompson’s hands. You also have Yu Darvish on the bump for the Padres and he’s looked fantastic in three of his four starts this season. No value on the money line for San Diego, but I do like the visiting team giving runs on the run-line, especially when I know they’ll bat for nine full innings.

The Orioles have decided to bring up 25-year-old righthander Kyle Bradish from Triple-A and will give him the start in Camden Yards against the Boston Red Sox. Bradish has been solid, posting a 1.20 ERA with a 0.,73 WHIP and 17 strikeouts over 15 innings (three starts), and I have confidence in him to pitch well at the big-league level. However, while the Red Sox have lost five of their last six and haven’t hit well as a team, getting decent odds on them in a hitter’s park against a rookie is something I am very interested in. Bradish is probably going to only go five innings which means the Red Sox will have four innings against an Orioles bullpen that has struggled mightily in recent games and has a collective 6.12 ERA over the last seven days.

We haven’t really jumped into any player props this season as I’m not really a huge fan, but when I saw the walks prop for one of my favorite young pitchers, Matt Brash, I decided it was time. I love Brash. I really do. The kid has phenomenal stuff, but like any young hurler, he misses the strike zone a lot with his breaking stuff and hitters with strong plate discipline have learned to lay off. The Marlins have the sixth-best walk rate against right-handed pitchers (10.2%) and the sixth-best walk-rate overall (10.1%).