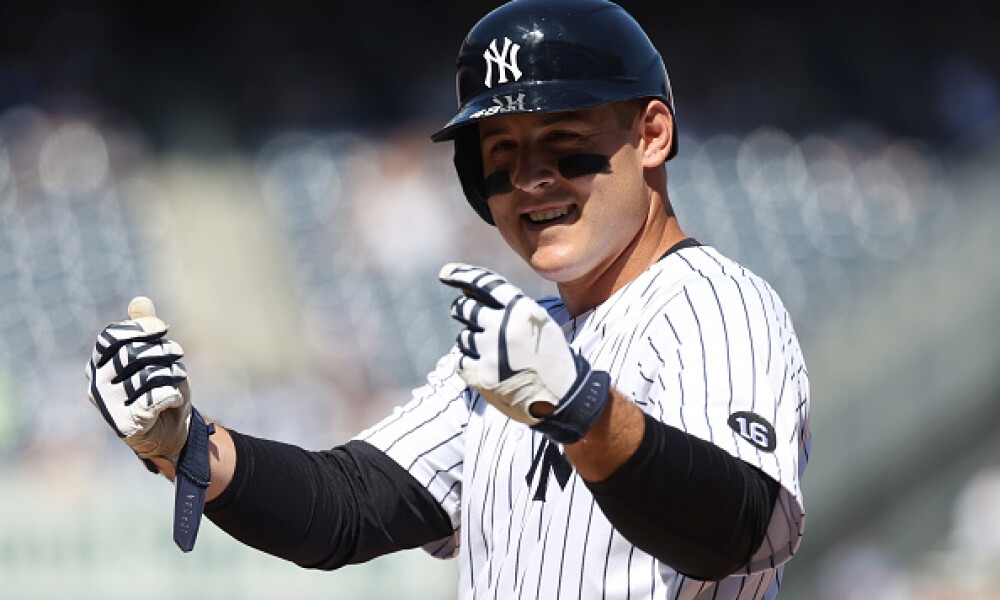 Fantasy baseball managers have been in a bit of a panic over the first few weeks as continued reports of a decline in offense and a deadened baseball circulate. Of course, anytime we hear something like that, someone like Anthony Rizzo comes along and says otherwise. We will continue to watch the offensive production closely, especially with our monthly fantasy baseball rankings due to come out on May 1, but please understand, we want to offer proper fantasy baseball advice and not be too reactive to a small sample size of data. We will take what we have learned so far and continue to dig deep in order to point you in the right direction. In the meantime, keep checking in on all of our content, listen to the fantasy baseball podcasts (both Fantasy Alarm’s and Ante Up), monitor your MLB lineups daily and we’ll keep you on the path towards your fantasy baseball championship.

While yes, a game like this can really pad the stats, you cannot deny that we are seeing some vintage Rizzo this season as he slashes .283/.411/.733 through 60 at-bats and is now sporting a six-game hitting streak with back-to-back multi-hit performances. Many left him for dead as he was considered a consolation prize for the Yankees after failing to acquire either Freddie Freeman or Matt Olson in the offseason. Rizzo definitely had his struggles over the past two years, but who didn’t with all the truncated springs and shortened, Covid-filled seasons? The short porch in right field should help him near that 30-homer plateau again and he should continue to be a beast in OBP leagues.

It should be interesting to see how the Marlins handle their infield once everyone is healthy, but Wendle, who now has three-straight multi-hit games, is doing everything he can to force manager Don Mattingly to keep him in the lineup every day over both Miguel Rojas (currently day-to-day) and Brian Anderson. It’s not like we are expecting some career year from Wendle, but you have to ride the hot streak for as long as you can and squeeze out as much production as possible. He’s never hit more than 11 home runs in a season, nor has he ever stolen more than 16 bags in a year, but if he can accrue 500 plate appearances here, maybe we get a 10-homer, 15-steal season from him here. Probably more wishful thinking, but for now, with all of his multi-position eligibility, you have to take advantage while you can.

A refreshingly big day at the plate for Baez who has been working his way back into the lineup after being on the 10-day IL with a thumb injury. He had gotten off to a fairly hot start, so seeing him return to form is certainly encouraging. Continue to monitor his progress, but it looks like we’re in the clear here and he can remain a staple to your fantasy lineup.

Those who doubted Trout on Draft Day are sitting on the outside, looking in with their noses pressed against the glass wondering why they ever doubted such a talent. Stolen Bases? OK, so he has none right now. But what he does have is a .347/.458/.776 slash line with five home runs, eight RBI and 13 runs scored over 52 at-bats and he looks as fantastic at the plate as he ever did. His two-run shot off Triston McKenzie in the third inning and his RBI-double in the fifth broke the game wide open for the Angels and he now has a nine-game hit streak that includes four multi-hit performances, three doubles, one triple and four home runs. If he is going to continue stuffing the stat sheet in four categories like this, we will happily find our stolen bases elsewhere.

We are now sitting on 15 innings without an earned run and 20 strikeouts for the 25-year-old southpaw who is living up to his late-spring hype. He had no trouble locating the strike zone with his breaking pitches and never had any issues as he allowed just two hits and one walk over the seven innings. What was funny was that he probably could have kept going as he was only at 90 pitches when he was removed. Not that we want to get greedy here. Just saying he was efficient. Enjoy the ride if you have him on your roster. If not, add him to your wish list for trades as we expect him to continue elevating his game this season.

Another Dominant Performance from Carlos Rodón

The biggest question coming into the season was whether it was going to be worth drafting Rodon at his spring retail value, given the late-season concerns over his shoulder from the previous year. So far, so good. It should always remain in the back of your mind, but for now, you can certainly enjoy watching his value increase with each and every start. After last night’s six innings of one-run ball and nine strikeouts, Rodon is sporting a 1.17 ERA with a 0.83 WHIP and 38 strikeouts over just 23 innings (four starts). The trickiest part with him is going to be the trade talk. Not for him, but for you. It’s very tough to let go of a guy who is tearing it up like Rodon is, but given the shoulder concern, he could be a strong sell-high candidate as he continues to accrue innings. Don’t allow yourself to be low-balled in fantasy baseball trades, but also don’t dismiss legitimate strong offers. Remember, all it takes is one shortened outing or scratched-start to diminish his overall value.

Anthony Bender Shakes Off Hip Injury to Earn Third Save

If you were worried about the Miami Marlins closer situation, things certainly looked positive as Bender pitched a perfect inning to notch his third save of the season. This was the first time he pitched since his hip started acting up on April 20 during a rough outing and he looked solid. Dylan Floro is still on his rehab assignment and there are a number of arms like Cole Sulser, Anthony Bass and Tanner Scott in the bullpen, but Bender could hold onto the job if his injury is behind him and he strings together a few more strong outings.

The Padres are going to get one more rehab start for Clevinger here on Wednesday as he takes the mound for Triple-A El Paso in the hopes of returning to the majors next week. He’s allowed just one run while striking out 10 over five innings while on assignment and if he gets through today’s outing without any issues, he should be able to take the mound Tuesday and open his season with a match-up against Cleveland, his former team. If you are stashing Clevinger on your IL, you should start making preparations for bringing him back.

Mondesi was removed from Tuesday’s game after tweaking his knee while returning to first on a pick-off attempt. He was immediately lifted for a pinch-runner and, given his history with injuries, was sent for tests. According to Kansas City Royals manager Mike Matheny, initial scans were positive which hopefully means no structural damage, but don’t be surprised to see him held out a few games while the team continues to evaluate him.

Granted, you have to be playing in either a very deep mixed league or an NL-only to be starting Newman, but we need to report this nevertheless, as it looks to be a potentially recurring issue. Newman missed three games with groin tightness two weeks ago but managed to appear in six of the next seven games last week. He is being considered day-to-day right now, but you’ll have to check the MLB Lineups page over the next few days to monitor his status. With Cole Tucker already out with Covid-19, it looks like everyone’s spring darling Diego Castillo, could get some work in.

Here’s another one to keep checking on daily, including today, as Kwan has missed the last two games with a hamstring issue. The team is reporting the issue as “tightness” right now, so we keep watching the Guardians to see if maybe he makes a pinch-hitting or running appearance. That is, once again, your assignment for today’s game. If he makes an appearance, we can breathe a sigh of relief, but another missed game could also mean a back-dated IL stint. We’ll just have to wait and see. Ernie Clement appears to be in line for more at-bats, in the meantime.

It’s bad enough that we’re almost to the month of May and Bryant still doesn’t have a home run to his credit, but now he’s dealing with back tightness. No bueno. He’s considered day-to-day and the Rockies don’t seem overly concerned, but fantasy owners are starting to freak out a little as he was drafted pretty high up with the move to Colorado. Personally, there is no panic here. To me, he is the ultimate buy low fantasy baseball candidate and making that offer while he is sitting out is the perfect time. We’re going to start doing some more Stock Watch work in the coming weeks so you know who is best to buy low and sell high in fantasy baseball this early in the season.

Just something to pay attention to as Reynolds owners are going to have to bench him this week and find another replacement. With Diego Castillo possibly needed in the infield, following Kevin Newman’s injury, Jake Marisnick and Yoshi Tsutsugo could see some increased at-bats this week.

My best bets for MLB are back after a nice, relaxing week-long vacation. We’ve gotten off to a strong start so far and we’re looking to recapture that momentum here today. Due to illness following my trip – yep, that’s right, they need to add me to the Covid-19 IL – I don’t want to jump in too hard too soon, but I’ve got a pair of bets I really like today and will roll with those.

One of the most under-the-radar pitchers right now has to be Pablo López of the Miami Marlins. He’s 2-0 through three starts this season and has a 0.52 ERA with a 0.75 WHIP and 17 strikeouts over 17.1 innings. Today he gets the Washington Nationals, a team mired in disappointment, especially when you look at their -41 run differential. The Marlins are actually 6-0 in Lopez’ last six starts, dating back to the 2021 season and I have little reason to bet against him or Miami today.

I love this pitching match-up between the Julio Urías of the Los Angeles Dodgers and Zac Gallen of the Arizona Diamondbacks. After a rough first start, Urias has been dominant in two starts, limiting the Reds and Padres to just one run on three hits over 10 total innings. While I would like to see this guy throw more than five, I am confident enough in him and the bullpen to hold down a weak Diamondbacks offense. On the other side, Gallen is facing a Dodgers team that has been held to under three runs in three of their last four games and Gallen has allowed just one run on four hits in two outings, both against the Mets this season. Given the early start today, I think the pitchers stand out early and help keep the runs off the board.