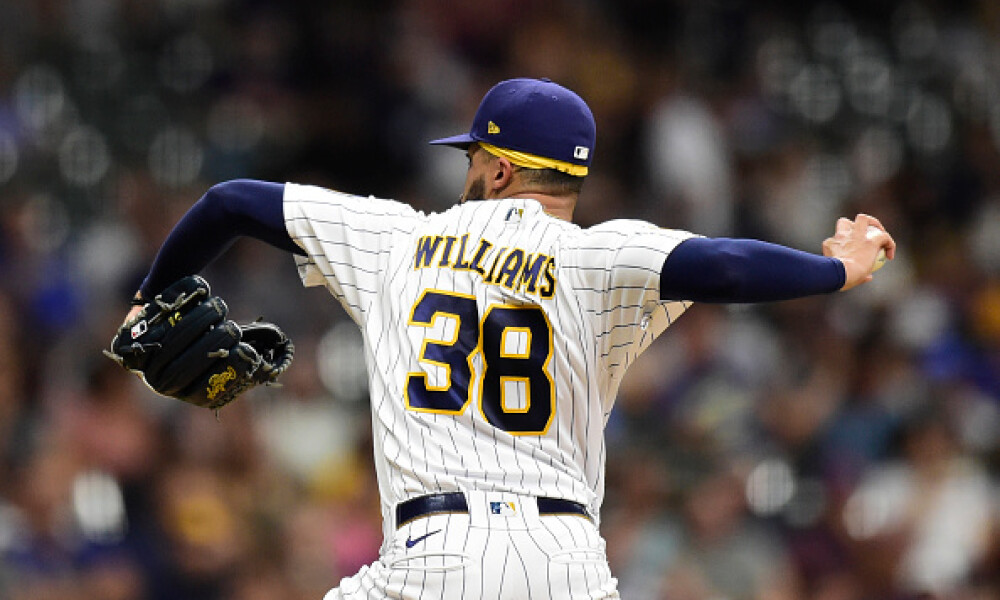 As expected, there have been a flurry of trades and free-agent signings in the first several days since the players and owners signed a new Collective Bargaining Agreement. Baseball general managers will probably keep on wheeling and dealing right up until Opening Day, too.

Between unexpected injuries and the last-minute transactions that’ll likely take place over the next couple of weeks, you’re going to want to schedule your fantasy baseball league’s draft as late in the preseason as possible.

The closer position is already one of the most volatile in fantasy baseball, but this season is even more tricky. With so many last-minute transactions yet to take place and so many MLB managers yet to officially name their team’s closer, you’ll want to roster as many pitchers with closer potential as possible. Let’s look at a few who should be on your radar.

Devin Williams is Josh Hader’s setup man, but he has plenty of stand-alone fantasy value. He provides fantasy managers with a great ERA and WHIP (career 2.09 ERA and 1.109 WHIP) as well as extra depth in the strikeout category (87 K's in 54 IP last season). If you believe the rumors, the Brewers have been willing to listen to trade offers for Hader. If he were to be traded, Williams would take over as the Brewers’ closer and would probably be one of the best closers in the game based on recent history.

Jake McGee (ADP 243) led the Giants with 31 saves last season, but he hit the IL on September 14th due to an oblique strain. Camilo Doval (ADP 147 struggled early in the season (6.39 ERA and 4.26 BB/9 through August 12th) but then did a very good job replacing him as the team’s closer. Doval is currently being drafted as if he’ll be the closing out games for the Giants this season, but Giants manager Gabe Kapler never officially named a closer last year and it doesn’t sound like he’ll be naming one this season either. According to Kapler when it comes to closing out games, “there’s some advantage to some level of consistency, but I think that pales in comparison to the advantage of having several that can do it.” He mentioned McGee, Doval, Tyler Rogers, Dominic Leone and Zack Littell as candidates to close out games. Based on Kapler’s philosophy, both Doval and McGee will get their fair share of save opportunities. ATC and The Bat projection models predict McGee will save 17 games this season. Based on last season’s success, why wouldn’t Kapler turn to McGee in the ninth inning? McGee could be a draft-day bargain at his ADP.

With Taylor Rogers mentioned in trade rumors this offseason and the Twins seeking to trade for A’s pitchers Sean Manea or Frankie Montas, don’t be shocked if Rogers isn’t a Twin on Opening Day. If Rogers isn't traded, he'll likely again be used in high-leverage situations as he saved nine games for the Twins last year before his season was cut short due to a finger injury. However, based on last season’s .287 BAA vs. right-handed batters, Rogers may not be used in all high-leverage situations. He shared closer duties for a portion of last season with righty reliever Hansel Robles, and will probably be asked to share that role again this season. Rogers' partner this time will likely be Jorge Alcala, who finished the 2021 season with a 0.57 ERA and an 18/2 K/BB ratio in his final 15.2 innings. Right-handed batters hit just .214/.246/.333 against Alcala last season and lefty hitters (.214 BAA) didn’t enjoy facing him either. ATC projects Alcala will notch 10 saves, but that could be a conservative estimate – especially if Rogers gets traded.

Aroldis Chapman’s days as the Yankees’ closer may be numbered. He posted his highest ERA (3.36) since 2011 and highest career WHIP (1.314) last season. His 2021 season fell apart once MLB began cracking down on pitchers who used sticky stuff (4.66 ERA in his final 33 appearances beginning on 6/23). When Chapman’s slump temporarily cost him his closer gig last season, it was Jonathan Loáisiga – not Chad Green – who pitched like the Yankees’ closer of the future. Loaisiga made 57 appearances and had three outings in which he gave up four runs each. However, he gave up just five runs in his 54 other appearances combined. Loaisiga relied on his hard sinker more last season, which helped him induce soft contact and kept opponents' batted balls on the ground (60.9 groundball rate) and in the park (0.4 HR/9). He has been a bit of an injury risk but, if he stays healthy and Chapman falters again this season, Loaisiga could be regularly closing out games the for the Yankees.

In last week’s article, we talked about how Pierce Johnson may open the season as the Padres' closer while Drew Pomeranz continues his recovery from surgery to repair his torn flexor tendon. Robert Suarez, though, is another Padres reliever who has closer potential and should be on your watch list this spring and early into the regular season. Suarez is a 28-year-old MLB rookie who played one year of professional ball in Mexico and five years in Japan. He throws a 101-mph fastball, hard changeup, and occasionally mixes in a splitter and slider into his repertoire. He pitched to a 1.16 ERA, recorded a 0.77 WHIP, and saved 42 games for the Hanshin Tigers last season. He didn’t give up any HR last season and has yielded just two in his last 113 appearances. Based on his experience as a closer, Suarez would be a logical choice to fill in at the closer position if Johnson should slump and/or Pomeranz faces a setback in his injury rehab.