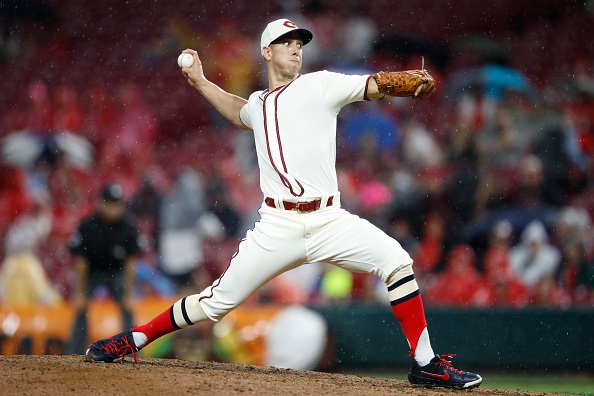 The reliever market continues to showcase a few stars, but it’s more so muddled with uncertainty, a lack of information, and complete and utter chaos. Some of the guys below may already be owned in your fantasy league, but if not, scoop them up and try to gain a few saves and/or holds. These guys, for the most part, have been pitching well, so they could also boost your team’s ratios a bit, whether it be minimizing base runners or striking out opponents at a reliable clip. Anyways, grab a cup of coffee or your favorite alcoholic beverage, and let’s get to it.

Ian Kennedy , RP KC– It’s not always going to be pretty for Kennedy or for those who own him, but believe it or not, he’s cutting the cheese at this juncture. He’s allowed just one earned run over his last five appearances, and he’s posted an 80 percent success rate over his last 10 opportunities. The Royals will give him a few opportunities to save some games, and while he might get traded as the summer months continue to roll, he’s valuable in leagues that value saves and/or holds. Believe it or not, he grades out quite well in numerous Statcast categories (seen below per Baseball Savant) and his allowed wOBA continues to be inconsistent, but for now is hanging around league average. 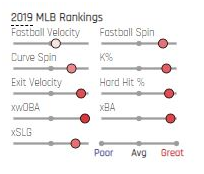 It won’t always be the prettiest, nor will the numbers ever look all that glamorous, but he’s getting the save opportunities right now, and even if he is dealt in July, he will be a seventh inning arm and in prime real estate to rack up the holds for a contender.

Michael Lorenzen , RP CIN – Lorenzen is owned in just 19-percent of Yahoo fantasy baseball leagues, but he’s closed out the last two ball games for the Reds. He’s sporting a 3.05 ERA on the season and right now, it looks as if he’s the team’s closer moving forward. It may not last forever, considering that Raisel Iglesias still has the closer tag, but it is worth noting that if opposing offenses can get a couple left-handed hitters up in the ninth inning, manager David Bell is displaying a tendency to make a switch. Lorenzen has allowed a .255/.317/.400 slash line to lefties, and while that may not be the greatest in and of itself, it’s better than Iglesias, particularly in terms of slugging percentage allowed (.556).

Blaine Hardy , RP DET – The 32-year-old southpaw has been effective this season and could be in line for saves if the Tigers capitalize on closer Shane Greene ’s hot start. He is certainly a dark horse candidate as other players have worked in higher leverage roles, notably Joe Jiménez , but other than Greene, one could argue that Hardy has been the best bullpen arm the Tigers have had over the last month. During that span, Hardy has posted a 1.69 ERA and 0.94 WHIP, which is solid. However, his fantasy appeal is a bit diminished, considering he doesn’t strike anyone out. Over his last 10.2 innings of work, he has just four strikeouts and has allowed three home runs. Yikes. Not ideal to say the least. Hardy has been effective by forcing weak contact. By generating a groundball nearly half of the time in 2019, he’s been able to be among the league’s best in terms of exit velocity and hard hit rate allowed, coming in at the 99th and 94th percentile respectively.

Nick Anderson , RP MIA – Anderson is hardly owned in leagues, and that 1.28 WHIP and 4.55 ERA likely won’t do him much justice. He isn’t in line for saves right now, as Sergio Romo has that gig locked down until he is traded, but when that vacancy opens up, Anderson should get the nod over Tayvon Guerrero. Recently, Guerrero has racked up more holds, and even has more save opportunities than Anderson over the last month, but Anderson has been better statistically. Compare their statistics over the last 30 calendar days:

Anderson’s strikeout percentage ranks in the 99th percentile, per Baseball Savant, and he is a live fastball in his arsenal. When Romo gets dealt, Anderson should get the save opportunities. This is a speculative add this far in advance, but he won’t cost much at this juncture and should have ample opportunity to reward fantasy owners for their investment. In the meantime, he brings elite strikeout potential to the table, and a chance for a handful of saves and/or holds.