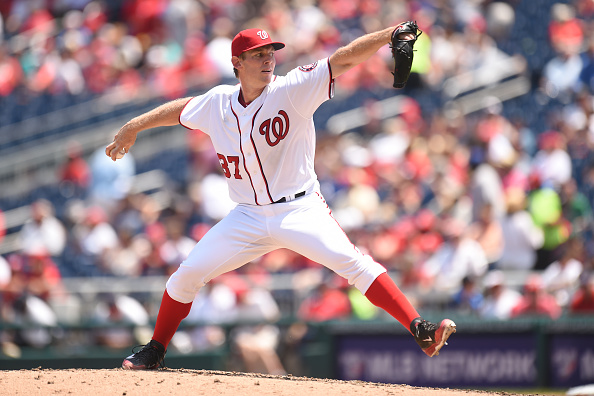 Analysis: Fantasy owners are greeted with a more robust Interleague schedule in Week 17, following the toe in the water which was last week. The Chicago Cubs gaining a DH is one of the more notable matchups – this should ensure additional at-bats for Willson Contreras and Javier Baez. Nelson Cruz owners will face a challenging week, as the Mariners are the road team to both the aforementioned Cubs and the Pittsburgh Pirates. While the team may opt to keep his bat in the lineup and push him into the outfield, he’s a defensive liability. The Tampa Rays will also lose the DH as they take on the Los Angeles Dodgers, which means that slugger Corey Dickerson will sit. Owners looking to take a flier on an NL player who will come into additional at-bats should consider Ryan Raburn, providing he gets the call from the Colorado Rockies.

Analysis: This is a rather light week for two-start pitchers, as I’ve only included my top 21 options, rather than the normal 25 for owners. Simply put, the talent at the bottom end of the player pool is becoming streamer worthy and interchangeable, with one easier start and one more difficult.

Jake Arrieta, Carlos Martinez and Noah Syndergaard top the list, and are followed by three rather unlikely candidates in Anthony DeSclafani, Jeremy Hellickson and Ervin Santana. All three pitchers are owned in less leagues than you think, and present great pickups in shallower leagues as well as cheaper DFS plays.

Since joining the Cincinnati Reds rotation in early June, DeSclafani has posted an eye-opening 2.50 ERA and 1.21 WHIP, while striking out 40 batters over 50 innings. The WHIP is inflated due to one poor outing against the Atlanta Braves, but if owners can look past that one start, DeSclafani has allowed three earned runs or less in each outing, while lasting into the sixth inning in all contests.

Hellickson has generated more buzz, especially over the past few days when rumors have swirled that the Miami Marlins are looking to acquire him. While his 3.84 ERA isn’t spectacular, he has been remarkably consistent, and has been fantastic since the beginning of July. Hellickson takes on two weaker opponents in the Miami Marlins and Atlanta Braves – don’t be surprised to see this string of success continue.

I intentionally boosted Santana’s ranking this week, as he squares off against his former team in the Atlanta Braves. The combination of a “revenge” factor coupled with the Braves minor league-esque lineup make for an enticing matchup. His second start comes against the Chicago White Sox, and while that is certainly more difficult, he did experience some success against them earlier this year. Coupled with his string of quality starts, Santana is also quickly becoming a trade candidate, much like Hellickson.

Analysis: Of the top 10 pitchers that I have ranked under the one-start table this week, nine are from the NL. Guess it helps picking on the NL East, eh?

I’ve spoken ad nauseam about the majority of the top pitchers on this list, so I’d like to focus on the middle to latter portion here, starting with the New York Yankees ace Masahiro Tanaka. While he still isn’t in my SP1 category, Tanaka (for the most part) has been quite consistent in 2016. His 3.15 ERA and 1.09 WHIP aren’t jaw-dropping numbers by any stretch of the imagination compared to his NL counterparts, but he currently has a lower ERA than Chris Sale, and a lower WHIP than Danny Salazar. In both categories he ranks inside the top seven in the AL. He’s been better than you think.

Speaking of another top-tier pitcher who has flown under the radar, how about Cole Hamels? In his most recent start against the Chicago Cubs (at Wrigley, no less), he out-dueled John Lackey, allowing zero earned runs over eight innings while striking out seven batters. He inexplicably struggled in back-to-back outings against the Minnesota Twins, but has been tremendous otherwise since the end of May. Some may argue that as the weather warms up his ERA will climb in the hitter-friendly confines of Arlington, but I’m of the opposite opinion, and think that he can maintain this level of success.