Justin Fensterman reacts to Week 16 in the NFL and gives you players whose stocks are on the rise or fall based on their performances. 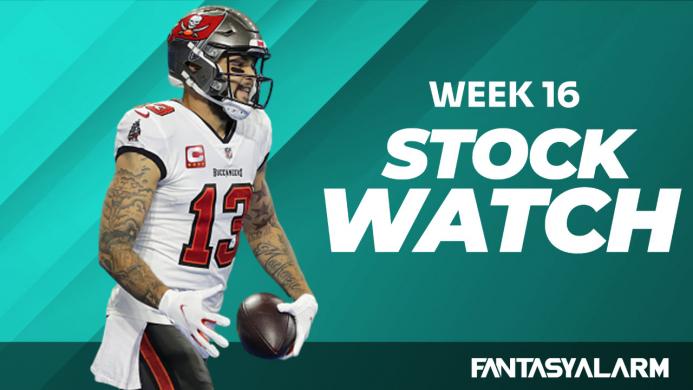 Week 16 got off to a ferocious start for those sporting Alvin Kamara on their fantasy football teams and he picked a good week to rush in 6 touchdowns with many fantasy players in their championship match up. The Aaron Rodgers -Davante Adams connection was once again a smashing success and even David Johnson put on his best performance of the season. It wasn't so hot for another veteran running back as Le'Veon Bell was not utilized as much as expected and barely produced. Melvin Gordon and Josh Jacobs sunk fantasy players as well. We also saw quarterbacks go down with injuries such as Deshaun Watson , Kyler Murray and Jared Goff , the latter expected to be the most severely injured of the three. Another quarterback is out as Dwayne Haskins was released by the Washington Football team. It's final approach and time to finish the job. Good luck! 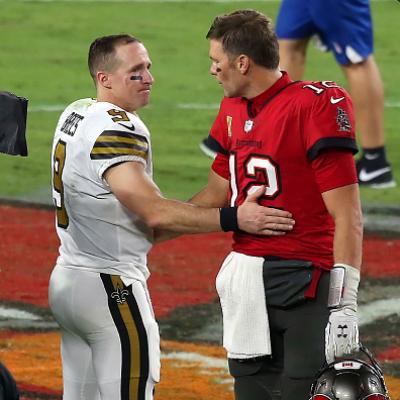 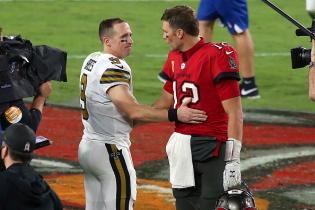 NFL Bills get a playoff W, 100s of tables are smashed

M. Andrews - TE
BAL1
Mark Andrews caught 4-of-11 targets for 28 yards in the Ravens' Division Round loss to the Bills.
Andrews took a step back in 2020 after his 64-852-10 receiving line last season. Across 14 games, he turned 88 targets into 58 receptions for 701 yards and eight touchdowns, enough production to hang around the top-five tight end rankings for the entire campaign. Lamar Jackson's inconsistent accuracy and dominant rushing make Andrews a volatile fantasy asset on a week-to-week basis even though he is the Ravens' No. 1 or No. 2 passing-game target. Andrews, 25, belongs in the second tier of positional rankings heading into summer fantasy drafts. The 2021 season will be a contract year for Andrews.
Added 12:56 am (EST)
Added 12:56 am (EST)

D. Duvernay - WR
BAL
Devin Duvernay was not targeted in the Ravens' Division Round loss to the Bills.
A third-round speedster out of Texas, Duvernay occasionally flashed as a receiver and returner during his rookie campaign. He was unable to supplant slot receiver Willie Snead in the starting rotation, leaving him with just 20 catches for 201 scoreless yards on the year. Snead is a free agent this offseason, however, so Duvernay could be a starter in 2021. Even then, the Ravens' run-first offense limits Duvernay's fantasy appeal in dynasty formats. His profile screams "better real-life player than fantasy player".
Added 12:49 am (EST)
Added 12:49 am (EST)

G. Everett - TE
LA1
Gerald Everett didn't catch his lone target in Los Angeles' Divisional Round loss to the Packers.
Even in opening the year behind Tyler Higbee, Everett recorded career-highs in targets (62), catches (41), and receiving yards (417) in 2020, staying healthy for 636 snaps (57%) across 18 appearances, postseason included. 27 in June, Everett (6'3/239) will likely garner interest in 2021 fantasy drafts as an athletic breakout candidate on his second contract pending where he lands as an unrestricted free agent. It would certainly help if Everett walks into a starting role with negligible competition.
Added 12:46 am (EST)
Added 12:46 am (EST)

J. Hill - RB
BAL1
Justice Hill didn't receive a carry in the Ravens' Division Round loss to the Bills.
The Ravens drafted their running back of the future in J.K. Dobbins, so Hill's primary focus has turned to special teams. He only had 12 carries in 12 games but was active over Mark Ingram because of his versatility. Hill is under contract through the 2022 season, although every signal points to him being a No. 3 or No. 4 back in the NFL. The Ravens easily could re-sign restricted free agent Gus Edwards this offseason to be Dobbins' sidekick.
Added 12:45 am (EST)
Added 12:45 am (EST)

D. Bryant - WR
BAL1
Dez Bryant failed to catch his lone target in the Ravens' Division Round loss to the Bills.
Bryant was able to make it back into the NFL following an Achilles tear, but he doesn't have the explosiveness to be a contributor anymore. It's certainly possible he retires in the coming weeks. Bryant, 32, had six catches across six games for the Ravens in 2020.
Added 12:42 am (EST)
Added 12:42 am (EST)

W. Snead - WR
BAL
Willie Snead caught 5-of-5 targets for 25 yards in the Ravens' Division Round loss to the Bills.
A slot receiver only, Snead compiled 33 receptions for 432 yards and three touchdowns on 48 targets in 2020. He missed three games after popping up on the reserve/COVID-19 list. On tape, Snead operates like a true veteran but lacks the play-making ability to make him a sought-after free agent. He'll likely compete for a starting spot in three-receiver sets this summer, possibly outside of Baltimore. Snead hasn't hit 700 yards in a season since 2016. He'll be 29 years old next year.
Added 12:36 am (EST)
Added 12:36 am (EST)

M. Boykin - WR
BAL
Miles Boykin caught 3-of-4 targets for 20 yards in the Ravens' Division Round loss to the Bills.
A third-round dart throw in the 2019 NFL Draft, Boykin has posted 198- and 266-yard campaigns in his first two seasons. He hasn't developed enough to believe he'll turn into a fantasy asset in this run-heavy Baltimore offense, especially with the Ravens likely to bring in receiver competition this offseason, mainly to take away his starting spot. Boykin's career 8.4 yards per target average is the lone positive on his profile at the moment. He'll be undrafted in standard-sized fantasy leagues this offseason. Boykin is 25 years old.
Added 12:30 am (EST)
Added 12:30 am (EST)

M. Brown - WR
BAL1
Marquise Brown caught 4-of-7 targets for 87 yards in the Ravens' Division Round loss to the Bills.
Brown was unusable for the first half of the 2020 season in fantasy circles, but he caught fire down the stretch to somewhat save his end-of-year stat line (58-769-8 on 100 targets). The second-year pro was utilized downfield even more this season, which partially explains his streaky production. It's worth questioning if Brown profiles as an NFL team's No. 1 receiver. At the very least, the Ravens need to bring in a capable No. 2 receiver this offseason to ease Brown's individual matchups. Nonetheless, his elite speed will keep his fantasy hopes alive as a flex option. He's averaged 45.1 yards per game through two seasons.
Added 12:20 am (EST)
Added 12:20 am (EST)