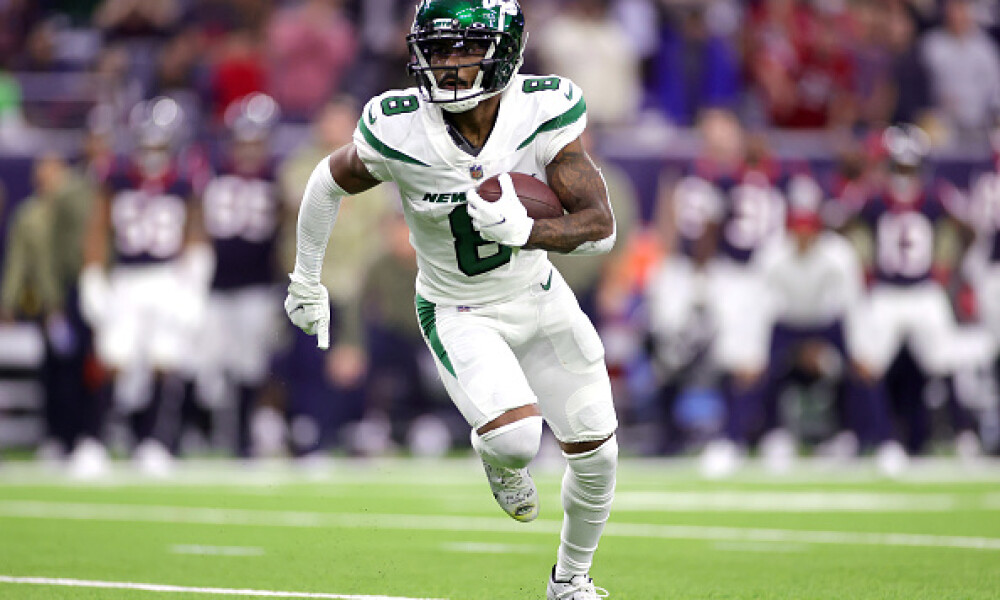 It was the return of DeAndre Hopkins and although he scored an early touchdown, he had just two targets in this one. He’ll work his way back to a full workload sooner rather than later, but the Cardinals continue to win and they don’t need to force anything upon him. Kyler Murray only threw the ball 15 times, which really crushed Arizona’s passing attack on all fronts.

For all those going to sleep at night hoping that Kyle Pitts will turn into everything you hoped and dreamed he would be, it doesn’t seem to be happening this year. That said, Russell Gage is absolutely OUT HERE. Gage had a season-high 12 targets in Week 13 and has now had seven or more targets in four of five games. Gage, right now, is a weekly start with all of the volume he’s getting on a weekly basis.

Both of the Falcons running backs are currently in the top 12 of targets for the running back position. Patterson is an RB1 thanks to the volume he gets out of the backfield – both as a runner and a receiver – and out wide as well. Mike Davis is an RB4, but has four targets in three straight games and has five touchdowns on the year.

It’s pretty cut and dry at this point how the Ravens’ passing offense is going to operate. The circle of trust has become smaller and smaller as the season has gone on, that’s for sure. Marquise Brown saw seven targets, Sammy Watkins saw six, Devonta Freeman saw eight and Mark Andrews saw nine. As you see here, no Rashod Bateman. He only had one target in this game. With fantasy playoffs right around the corner, it’s time to drop him and move on.

Buffalo’s passing game gets a hall pass here. They played in rain, sleet and everything in between. They get a Week 13 reprieve.

With Allen Robinson out, Darnell Mooney, Jakeem Grant and Damiere Byrd all saw seven targets with Andy Dalton under center. That may change with Justin Fields likely back in Week 14, however. It would definitely change if Allen Robinson, who’s finally practicing this week, were to play.

I’m not sure it’s been a complete change of the guard of late, but something has definitely…changed. Over the last two weeks, Tee Higgins has been targeted 22 times and Ja’Marr Chase has had 11. Chase still leads the team in targets and would probably still be considered the favorite target of Joe Burrow, but the gap is much closer than it’s been literally all year long.

With Amari Cooper back in action, it was all CeeDee Lamb and Michael Gallup all the time as Cooper was used as mostly a decoy and played limited snaps. Lamb had his third game this year with 10+ targets, his first since Week 6. In his four weeks since returning from injury, he’s had five or more targets in each game, seven or more in three straight.

Both Dallas running backs are playing a role in the passing game as Ezekiel Elliott has 11 targets over his last two games while Tony Pollard has eight targets over that span. One – or both – of these guys could challenge all the RBs in the league in terms of targets if they had a backfield to themselves. Dalton Schultz had another solid output and is a good bet to see five to eight targets a week at this point.

I mean, how do we start any of these guys at this point? Sure it was nice to see Courtland Sutton see six targets in one game and not over a three week span, but it’s very hard to like anything about Teddy Bridgewater outside of him getting the ball to Javonte Williams as much as humanly possible.

With D’Andre Swift out in Week 13, Jared Goff was forced to drive the ball down the field more often than not and he didn’t look half bad doing so. Amon-Ra St. Brown was his go-to guy with 12 targets, which was the first time during his career he’s had double-digits. The new guy, Josh Reynolds, also had himself a day notching seven targets, which was the most he’s had with the Lions since first being activated three weeks ago.

Goff also fed T.J. Hockenson eight targets, he scored and they won. Maybe getting him the ball is a good game plan, ay?

This passing game has been putrid, but maybe there are greener days with Davis Mills under center? One can only hope.

Annnnnnd there you have it folks. T.Y. Hilton has ALWAYS crushed the Texans, but he’s an afterthought in the passing game with Michael Pittman garnering eight targets or more seemingly every game. Pittman is one target away from 100 on the year and has arguably been the best late round receiver in fantasy leagues. He’s the only viable passing asset you can trust on a week-to-week basis in Indy.

Things are bad when Laquon Treadwell was one of the more popular waiver wire additions this week. He had five targets, which tied Laviska Shenault for the receiver lead in looks through the air. Treadwell has limited value despite notching 13 targets over his last two games, because his team is 31st in points per game and they just don’t move the ball.

Urban Meyer loves using his tight ends. Loves using them. They used James O’Shaughnessy for over 66% of the snaps in two straight games and had five and six targets in those games. If you’re desperate for production from your tight end position, he’s someone worth taking a look at.

The only thing that’s new from Kansas City in Week 13 is that this was just the second time in seven games that Clyde Edwards-Helaire has had more targets than Darrel Williams. He’s a very capable pass catcher, he just hasn’t been used like they use Williams through the air. Maybe that changes moving forward.

The most interesting aspect of the Rams passing attack with the addition of Odell Beckham Jr. hasn’t been OBJ, it’s been that Van Jefferson continues to be favored over him. Jefferson has had seven or more targets in four straight games while OBJ has done that just once since joining the Rams. Jefferson continues to offer FLEX appeal on a weekly basis because of how much volume we’re seeing out of the Rams passing attack.

Does anybody have a more consolidated passing offense than the Chargers? Keenan Allen, Mike Williams, Austin Ekeler, end list. Every so often they sprinkle in a little Jared Cook, but even then, he’s generally still playing fourth fiddle.

With Henry Ruggs gone, the receivers are led by Hunter Renfrow and truthfully, he’s the only guy worth rostering at this point in the year. His value hasn’t taken any sort of hit when Darren Waller has been in or out of the lineup.

I mean, the growth of Josh Jacobs in the passing game is just wonderful to see. Five straight weeks of four or more targets including a season high NINE in Week 13. His 45 targets through 10 games matches a career high he set in 15 games last season. This guy could be a consensus top-24 pick each and every year if he can be this active in the passing game because we know he’s going to get plenty of volume and score touchdowns on the ground.

Things were always going to be a little interesting in Miami with DeVante Parker returning to action and they were just that. Jaylen Waddle once again shined and it didn’t matter who else was catching passes for the Dolphins. He saw 10+ targets for the sixth time this season. Parker played 71% of the snaps and caught all five of his targets for 52 yards.

Tua Tagovailoa has been excellent getting the ball out to all different receivers and pass catchers and Week 11, nobody saw more targets come their way on Miami than Mike Gesicki. He had a big game and saw 11 looks in this one. He’s played himself into a weekly TE1 play, even with the team getting healthier each and every day.

Yeah, Justin Jefferson is THAT dude, but with Adam Thielen suffering an ankle injury and expected to miss time, guys like KJ Osborn and Tyler Conklin are the most likely candidates to pick up the slack. Osborn has 54 targets on the year and Conklin has 64. Each of them saw seven or more after Thielen left the game.

I mean…they threw three passes. This entire game gets a hall pass.

The Saints trailed from the outset of this game and Taysom Hill was forced to throw north of 40 times because of it. With Hill at quarterback, we saw Marquez Callaway – who entered the year as the Saints No.1 receiver – iced out of the rotation. Tre’Quan Smith and Ty Montgomery saw seven targets while Deonte Harris saw eight. Now, Harris is serving a three game suspension moving forward so we’ll see who benefits the most.

Mike Glennon played quarterback in Week 13. Who is surprised the offense looked like crap?

The Jets found something special with Elijah Moore in the second round of this year's draft. In Week 11, Moore broke through for 11 targets – which was his career high. 11 wasn’t enough, though, as he set a new career high with 12 in Week 13. With Corey Davis out, there is no reason to think Moore won’t continue to dominate the targets.

Although Gardner Minshew looked really good under center, not one receiver stood out in the volume department. Dallas Goedert did. So did Kenneth Gainwell. We should see Jalen Hurts active in Week 15 when they return from their bye week, but if Minshew is to start in the future, at least we know who the ball is going to and who it’s not.

Nothing new to see here. It’s Diontae Johnson’s world and we’re all living in it.

If Seattle falls out of playoff contention, we could see more Dee Eskridge, but until then the three targets he’s had each of the last two weeks will likely continue. Tyler Lockett and DK Metcalf continue to underwhelm in production, but they did both have eight targets.

With Deebo Samuel out, a lot of us expected that Brandon Aiyuk and Jauan Jennings would take the next step. Aiyuk had just six looks and Jennings had one. It was George Kittle’s day to shine and he’s proving why he’s one of the league’s best tight ends. We’re getting major positive touchdown regression too.

The biggest development for Washington’s passing attack is the emergence of Antonio Gibson in the passing game. He’s had two straight games of six or more targets after having none the first 11 weeks of the season. Gibson is a surefire RB1 when he’s this involved in both facets of the offense.