Fantasy Baseball Daily Round Up: August 17 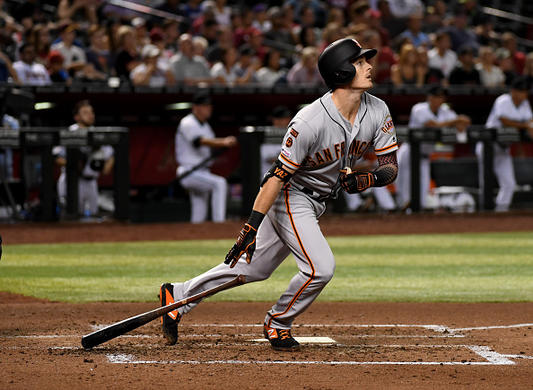 There had never been more than two rookies with three-home run games prior to this season according to Stats By STATS. Since May 30th, only Yordan Alvarez (52) and Pete Alonso (48) have driven in more runs as a rookie than Yastrzemski (45).

A swing of beauty. pic.twitter.com/aEjRYXaUkC

Harper’s hit four home runs the last three games with 10 RBI. He’s also hit seven home runs his last nine games and nine in the last 18. A key to the video above, when Harper’s hot, he drives the ball to the opposite field.

Some more rookie history with a Will Smith home run in Atlanta:

Will Smith of the @Dodgers hit his 10th home run in his 25th career game tonight.

He is the first Dodgers player and the second MLB catcher in the live-ball era to hit 10+ HR through 25 career games (also NYY's Gary Sánchez ).#LABleedsBlue

Plus, above the border, it appears hitting bad pitches for home runs could be an inherent trait:

Cody Bellinger moved into the major league lead blasting his 41st in Atlanta only to be matched later by Mike Trout , as called by Bill Walton:

"Sending one ricocheting through the universe." pic.twitter.com/gx2K92I2Wu

Trout tied a career high set in 2015 and hurtling towards his first 50 home run season along with setting an Angels franchise record for the category.

Last, but not least, if one owns the major league baseball package, watch the replay of the White Sox game with Walton announcing, here’s his prognostication of a James McCann grand slam:

Other notable hitter highlights include José Ramírez blasting his 20th home run while recording three of Cleveland’s four hits on Friday night. He’s hit three home runs the last two games, four in the last five and six in his last 11 contests. Ramirez owns a .373 average in 134 at-bats versus the Yankees with seven doubles, nine home runs and 26 RBI in 36 games.

Ronald Acuña Jr. swiped his 29th base moving within one of reaching the 30/30 mark this season. Max Muncy became the first Dodgers batter since Shawn Green (2001-2002) to reach 30 or home runs in consecutive seasons in their comeback win.

Dexter Fowler went 3-for-6 with his 14th home run and drove in four during a Cardinals rout of the Reds. Kolten Wong tallied four hits including his ninth home run. Since July first, Wong’s slashing .376/.448/.505 with 12 runs, eight doubles, two home runs, 11 RBI and two stolen bases for those looking to boost their team’s average the last six weeks.

Once again, Anthony Rendon carried the Nationals offense hitting two doubles while driving in both runs in a win. His last 34 games yields 22 runs, six doubles, six home runs, 34 RBI and a .354/.424/.592 slash line and he’s already set a career high in home runs with 26 this season. Pay the man.

Albeit in a no-decision, Justin Verlander takes center stage striking out 11 in Oakland over seven innings. He allowed four hits and two earned runs with no walks. Verlander set a franchise record in the process:

.@JustinVerlander is the oldest pitcher since Randy Johnson in 2002 to go 6 straight games with 10+ Ks.

Not to be outdone, Lucas Giolito accrued 11 strikeouts over six innings en route to his 13th win in Los Angeles:

Giolito notched 23 swinging strikes and 19 called for a robust 37.2 CSW percentage finishing second in the category on Friday night.

Here’s the other notable starting pitcher performances from last evening:

Bullpen Notes: Another Messy Night For The Cubs

For the first time since May fifth and sixth in 2018, the Cubs suffered consecutive walk-off losses. Noting the team’s struggles on the road, 23 wins in 62 games (.371 winning percentage), losing in the last at-bat adds an extra sting. Fresh off the injured list, Brandon Kintzler incurred his second loss and second blown save giving up three walks prior to Kevin Newman ’s game winning single. Of more importance, a two out bases loaded walk to Cole Tucker . David Phelps tossed a clean eighth inning with two strikeouts but ceded the ninth to Kyle Ryan who gets credit for his 12th hold but allowed a hit in one-third of an inning. Pittsburgh’s Felipe Vázquez also suffered a blown save in the eighth coughing up a two-RBI triple to Tony Kemp . It’s a funny, unforgiving game.

Here’s the rest of the high leverage moments from Friday:

No surprise, more injury updates await. Ender Inciarte limped across home plate after suffering a hamstring injury running the bases. This could prompt a quick turnaround for Adam Duvall to Atlanta after being demoted. Rhys Hoskins may return to the lineup for the Phillies. Keep tabs on Eugenio Suárez , he left last night’s game after being hit by a pitch near his wrist. His manager hopes it’s only a couple of days of rest for Suarez. Stay tuned.

And, the rookie season of Fernando Tatis Jr. will be cut short due to a back injury. Reports surfaced on Friday about the stress reaction in his back. Tatis Jr. will be reevaluated in three weeks, but there’s no reason to rush him back this year.

In the day games of a split Saturday slate, Cleveland will deploy Zach Plesac to the mound opposed by Jame Paxton. Plesac could be pitching for his spot in the rotation with the pending return of Corey Kluber . Out west, Rogelio Armenteros will match-up with Chris Bassitt while Ryan Yarbrough takes the mound for the Rays with Oakland and Tampa Bay fighting for Wild Card spots. 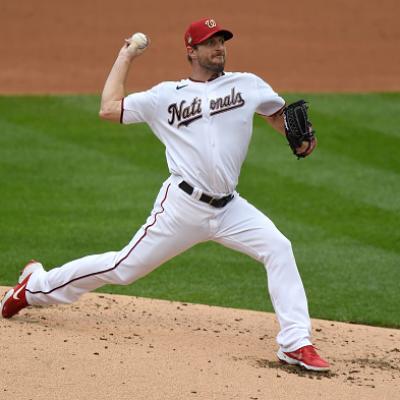 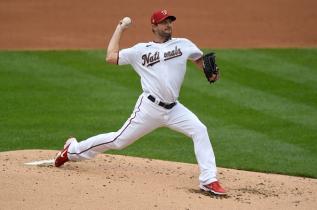 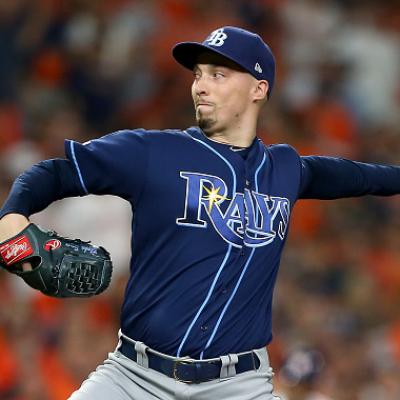 Y. Puig - RF
FA
Jon Heyman of MLB Network reports that the Marlins are not in on free agent outfielder Yasiel Puig.
Puig has been tied to Miami by multiple outlets -- and the Marlins reportedly offered him an incentive-driven deal a year ago -- but it seems that ship has now sailed. The 30-year-old essentially missed the entire 2020 MLB season after reaching a tentative agreement with the Braves in July and then promptly coming down with COVID-19. He did play well in limited action in the Dominican Winter League and put up a decent .785 OPS with 24 home runs, 84 RBI, 19 stolen bases, and 76 runs scored over 149 games with the Reds and Indians in 2019.
Added 12:37 am (EST)
Added 12:37 am (EST)

M. Tanaka - SP
FA1
According to Sankei Sports in Japan, free agent right-hander Masahiro Tanaka is in talks with the Rakuten Eagles of Nippon Professional Baseball.
There has been chatter for weeks now that Tanaka might really head back to his native country, and the Yankees' recent acquisitions of starting pitchers Corey Kluber and Jameson Taillon might have spurred that consideration even further. Rakuten is set to open spring training next week, so these reported negotiations between Tanaka and his former NPB team could move quickly. The 32-year-old registered a 3.56 ERA, 1.167 WHIP, and 44/8 K/BB ratio over 48 innings (10 starts) for New York during MLB's condensed 2020 campaign.
Added Yesterday 10:18 pm (EST)
Added Yesterday 10:18 pm (EST)

M. Brantley - LF
HOU
Astros re-signed OF Michael Brantley to a two-year, $32 million contract.
Brantley drew strong interest this winter from a number of other teams, most notably the Blue Jays, but he ultimately decided to return to Houston on a deal that looks extremely similar to the one he signed there two offseasons ago. The 33-year-old boasts a .309/.370/.497 batting line with 27 home runs and 112 RBI over his last 194 games since the beginning of 2019 and should remain a reliable high-OBP presence in the heart of the Astros' lineup. He spent a lot of time at DH last summer, but the hope is that Yordan Alvarez (knees) will be back in the fold to handle that role in 2021, with Brantley commanding the majority of the starts in left field.
Added Yesterday 6:34 pm (EST)
Added Yesterday 6:34 pm (EST)

J. Hudson - C
SEA
Pirates signed C Joe Hudson to a minor league contract with an invitation to spring training.
Hudson became a free agent in October after spending the 2020 season with the Mariners. The 29-year-old is 5-for-30 (.167) over just 18 career games in the majors and will give the Pirates some depth behind the plate heading into camp.
Added Yesterday 2:59 pm (EST)
Added Yesterday 2:59 pm (EST)

T. Bauer - SP
FA
Andy Martino of SNY.tv reports that the Mets "continue to be engaged" on free agent starter Trevor Bauer.
Martino adds that an agreement is not close and other clubs are involved. Still, the Mets' interest appears to be real. Signing Bauer could push the Mets up against the $210 million luxury tax threshold, but that might not be much of a setback for new owner Steve Cohen. After all, it has been treated as a salary cap by MLB teams when in reality it's not that at all. The question is whether the Mets feel adding a talented pitcher like Bauer would be worth the public blowback when they could spend their cash to add a center fielder, a reliever, and an extra infielder, fitting with their needs. Stay tuned.
Added Yesterday 2:00 pm (EST)
Added Yesterday 2:00 pm (EST)

F. German - SP
NYY
Red Sox acquired RHP Frank German from the Yankees in the Adam Ottavino trade.
Ottavino is the big name here, but given Boston will pay most of the money left on his deal, odds are they wouldn't have done this one without landing an interesting prospect. German, 23, was a fourth-round pick of the Yankees in 2018 and holds a 3.56 ERA with 128 strikeouts and 44 walks over his first 111 1/3 innings in pro ball. He throws hard, but he'll have to make progress with his control to avoid a move to the bullpen.
Added Yesterday 1:38 pm (EST)
Added Yesterday 1:38 pm (EST)

A. Ottavino - RP
NYY1
Red Sox acquired RHPs Adam Ottavino and Frank German and cash considerations from the Yankees for a player to be named later or cash considerations.
It's a pure cash-dump for the Yankees, who are looking to stay under the $210 luxury tax threshold while adding some other pieces. Brett Gardner is one possibility. Ottavino is still owed $8 million this season and a $3 million signing bonus which is deferred to 2022, but Boston will cover most of that. According to Buster Olney of ESPN, the Yankees are paying just $850,00 as part of the trade. As for the Red Sox, they managed to buy a prospect as well as a pitcher who is capable of a rebound. Ottavino could very well be saving games for Boston this season. And if he bounces back, he could be an interesting trade chip in the final year of his deal.
Added Yesterday 1:21 pm (EST)
Added Yesterday 1:21 pm (EST)