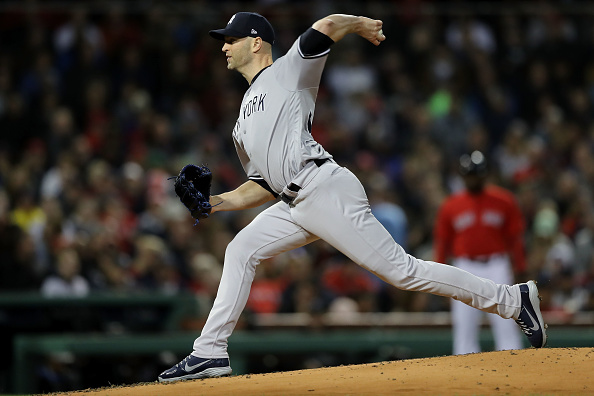 Writing about the Winter Meeting acquisitions allowed for visions of potentially hyping where Bryce Harper or Manny Machado would sign or J.T. Realmuto would be traded. Instead, it’s been pitchers setting their market, smaller deals for situational hitters and lots of rumors. Charlie Morton agreed to a two-year deal with Tampa Bay which could be a perfect fit in an imperfect division for him to land. J.A. Happ ’s agreed in principle, to a two-year contract with a vesting year with the Yankees as well. Justin Bour heads to the Angels to further muddle the first base situation with the team. Last, but not least, the set-up reliever market took shape with Jeurys Familia heading back to the Mets and Joe Kelly signing with the Dodgers in separate three year contracts. Now for the fantasy ramifications of each.

Charlie Morton to the Rays

Representing the pioneers of the “opener” strategy, Charlie Morton will be able to maximize his skill set with the Rays. Morton won 15 games last season amassing 201 strikeouts in 167 innings with a 3.13 ERA, 3.59 FIP and 1.16 WHIP. He’s also won 29 games the last two seasons and a World Championship with Houston. Owning one of the most effective curveballs in baseball, Morton joins the staff of the pitcher with 2018’s best curve, Blake Snell .

As mentioned above, joining Tampa’s forward thinking staff could benefit Morton. With data to back his performance as he faces a lineup more often, Morton struggles. If he works as the follow-up to the opener, Morton should thrive. Here’s a chart illustrating Morton’s statistics last year based on times through the lineup:

Fantasy players will also need to hone in on Morton’s strong 19.7 strikeouts minus walks percentage along with a drop in contact allowed last year with a slight increase in swinging strike rate. Using his expected statistics along with his FIP, Morton should be able to maintain an ERA in the 3.6-to-3.8 range in spite of heading to the American League East. His bbFIP from xSTATS of 3.4 in 2018 and 3.75 in 2017 support this.

Steamer projected Morton for a 10 - 8 record in 152 innings with a 168:55 K:BB, 3.49 ERA, 3.52 FIP and 1.23 WHIP prior to the trade. With deference to wins being fluky, Morton should be able to replicate his 167 innings from last year although the strikeout total could drop slightly. Tampa should manage his innings to maximize his strengths of only going two times through the order so he’s someone to avoid in quality start formats. However, do not overlook his strikeouts and help in ratio statistics just because of his new home, Morton’s been very stable the last two years.

Representing an oft overlooked veteran who falls in drafts, J.A. Happ keeps producing for fantasy. He won 17 games in 2018 working 177.2 innings with 193 strikeouts, a 3.65 ERA, 3.98 FIP and 1.13 WHIP. Moving to New York full-time will be less than ideal, especially considering Happ yielded a lower ground ball rate and a higher hard hit rate last season, but, he’s won 47 games his last three seasons with a 3.44 ERA and 1.2 WHIP.

Part of the change in 2018 lies in Happ throwing more fastballs, less sinkers and he almost eliminated his curve. Happ’s slider did generate a higher rate of swings and misses last season, perhaps hinting he could be adjusting his arsenal to suit Yankee Stadium. Either way, owners will not be targeting Happ for upside, just more of the same to succeed.

Happ’s expected statistics of a 3.69 bbFIP and xOBA of .307 last year will be necessary to replicate his numbers. Steamer projects him for a 12 - 10 record in 184 innings with 188 strikeouts, a 3.82 ERA and 1.23 WHIP. Due to his new venue and past performance, these numbers look good on the surface. He could win a couple more games but plan on the ratio statistics to migrate towards his underlying statistics versus his totals from last season. A solid number three or four starter to target depending on league size in fantasy.

Justin Bour to the Angels

While the Albert Pujols contract will hover like an albatross for the Angels, they did make a move to sign veteran Justin Bour as a potential platoon partner to him. Bour disappointed last season but hit 20 home runs in 423 at-bats. Over the last three years, Bour’s hit .258/.352/.469 with 60 home runs, 193 RBI, a .210 isolated power and 37.2 hard hit percentage in 1,080 at-bats.

However, focusing on the platoon inference, in this same time frame, Bour’s hit .270/.365/.504 versus right-handed pitchers with 52 home runs in 838 at-bats (one every 16.12 at-bats) and 158 RBI. Keep in mind, the Angels lowered the fence in right field and adding another potential left-handed power bat to the lineup cannot hurt. Here’s his line drives and fly balls the last three years with his new park as the backdrop: 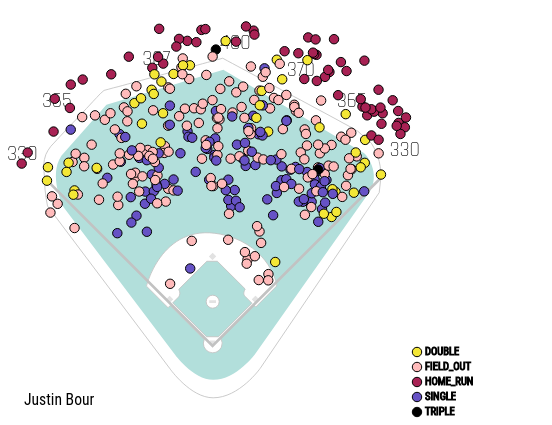 Delving a bit deeper, Bour’s numbers against right-handed pitchers with xSTATS data also suggests this could work if he’s in a strict platoon:

Due to his reduced production in 2018, Bour’s Steamer projection only sees 290 at-bats. Time will tell how well Bour will do with the Angels and how much he plays. However, if he’s used almost exclusively versus right-handed pitching, there’s value to be mined in league only formats and deeper mixed leagues. Even using his xSTATS data, Bour averages a home run versus right-handed pitchers every 17.21 at-bats the last three years.

Jeurys Familia to the Mets

Pitchers can go home again. Jeurys Familia returned to the Mets and will work as the set-up pitcher to Edwin Díaz making a formidable duo at the backend of the bullpen. Familia won eight games in 2018 with 18 saves, seven holds and a 3.13 ERA in 72 innings. He also recorded 83 strikeouts, a 2.65 FIP and 1.22 WHIP.

Rebounds in terms of his swinging strike percentage (14.1 percent), contact allowed (70.6 percent) and O-Swing rate (33.1 percent) accounted for his success. In terms of fantasy, Familia will get an occasional save when Diaz needs rest, but will not work as a primary closer the next three years. Good for the Mets, bad for fantasy in mixed leagues.

Joe Kelly to the Dodgers

In a similar circumstance, Joe Kelly parlayed his postseason success into a contract with the team he beat in the World Series signing a three-year deal with the Dodgers. Kelly proved volatile last year as a streaky reliever. He finished with a 4 - 2 record with two saves and 21 holds in 65.2 innings.

His ratio statistics finished at a 4.39 ERA, 3.57 FIP and 1.36 WHIP with 68 strikeouts. Kelly also fared better against left-handed hitters than right-handed ones, turned in a 3.93 bbFIP according to xSTATS. He would benefit from using his change more often with the Dodgers since it generated a 50.8 whiff per swing rate last season with a .111 batting average against and .083 isolated power allowed. However, like Familia above, if Kelly’s not closing, he will not be on mixed league radars but should slot in as the handcuff to Kenley Jansen in league only formats.

Veteran Starters on the move

Due to the lack of mixed league appeal, not going to go into full detail on the Tanner Roark trade to the Reds or Lance Lynn signing with the Rangers. Both pitchers represent innings eaters in these deals with limited upside. Roark moves to a much more hitter friendly park on the heels of giving up more fly balls in 2018 with a 4.27 FIP and 4.24 bbFIP. Best case scenario, 10 wins with a 4.25 ERA and 1.3 WHIP. Lynn did exhibit signs of growth but they do not outweigh his new home in Texas for the next three years. He won 10 games in 2018 with a 4.77 ERA, 3.84 FIP and 1.53 WHIP. Although his bbFIP of 4.13 and increased strikeouts minus walks percentage provide hope, his ratios will do more damage than good in Texas.

Be sure to stay with Fantasy Alarm to stay ahead of the competition as draft season approaches.