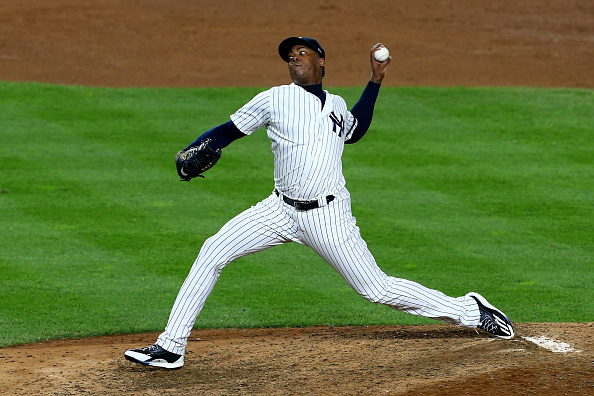 Past experiences suggest there’s two schools of thought in how to approach saves. Some target the category early in drafts for the security aspect due to the given volatility of saves in baseball. On the other hand, many prefer to roster more predictable hitters or starting pitchers when the first tier of closers will be taken and take chances late on relievers with skill upside along with a chance to close in the future. There’s advantages to both techniques.

However, with all the recent revelations about the growing scarcity of stolen bases, could saves be next? Darwinism suggests evolution can be necessary for future success and survival. Fantasy owners face a potential dilemma with how bullpens seem to be changing, and not necessarily for the better in regards to the limited number of closers available compared to output.

Plus, with the growing knowledge of games needing to be decided in high leverage innings leading up to the ninth inning rather than exclusively focusing on the last three outs, baseball’s changing. For example, the Rangers lost 23 games last season in which they led or were tied after six innings. This can be partially blamed on their beleaguered bullpen. Teams seem to be in transition in order to identify relievers they trust as a bridge to the ninth as much as they focus on who will record the last three outs.

In order to save some time, here’s a chart which shows the total number of saves in baseball the last five years along with how many relievers notched at least 20 or 30 saves within these time frames.

Saves reached a peak in 2015 with just under 1,300 saves. However, note the precipitous drop of over 110 last year. Plus, nine fewer relievers finished with at least 30 saves in 2017 compared to the high water mark of 20 just two years ago. It’s easier to predict which relievers fantasy players will target compared to outcomes, which just underscores or reinforces on how much or when to invest in a closer remains open to debate.

Former NFBC overall champion Rob Silver shared on Twitter about reaching the 90th percentile in saves last year only took 89, down from 97 in 2015 and 95 in 2016. This falls in line with the total numbers of saves in freefall last year as teams try to reconfigure their stance closing out games. Add in how Houston abandoned a struggling Ken Giles en route to a championship and using starters in high leverage relief situations instead. This cannot translate to the regular season, but using pitchers for multiple innings, ala Chad Green, along with more than one closer depending on situations could ensue.

For research purposes, here’s charts to illustrate the top-10 in NFBC average draft positions along with underlying statistics like ERA- (a weighted version of earned run average) and strikeouts-minus walk percentage plus the save leaders from the prior season. Each chart will be assessed with an outlook to 2018 included after.

Although Wade Davis did not appear in the 2015 saves leaders, his name heads the list in ERA-, by a decent margin and his anchoring the Royals bullpen on the way to a world championship only cemented his ascension to the top of drafts. However, it would be Jeurys Familia who would accrue the most saves in 2016 with 51. Four of the top-10 closers taken according to ADP did finish in the top-10 in saves for the season, but this translates to a 40 percent success rate.

Three of the top-10 saves leaders were taken in from the group drafted 11th-to-20th and the other three were taken after the top-50 relievers in NFBC drafts. Holy volatility. Sam Dyson, Alex Colome and Jeanmar Gomez represent the three to finish with at least 37 saves in this season but were not targeted as such. Same goes for Seung-Hwan Oh and Edwin Diaz. How did this change the top draft targets last year?

Kenley Jansen appropriately moved to the front of the closer class according to ADP. Also, a big-three formed with Aroldis Chapman and Zach Britton going around the same time. Only one of these three made it through the season unscathed to injury and capped off a strong season. But this can be the outlier, even with Jansen turning in an almost perfect season, he only returned value in regards to his draft position.

Craig Kimbrel struck out half of the hitters he faced last year and came as a discount in drafts due to a rough season prior. Seung-Hwan Oh lost his job as the Cardinals closer, Britton lost almost his whole season to injury, Chapman’s yet to save 40 games in a season, Mark Melancon missed most of the year and Edwin Diaz lost his job for a short spell.

In spite of this, compared to their ADP’s, six of the top-10 did finish as such in regards to total saves. Only one from the 11-to-20 range joined the top-10 saves leaderboard with three from 30th reliever taken overall and higher range (Fernando Rodney, Greg Holland and Corey Knebel).

It almost seems like a mixed bag when viewing this chart. Jansen, Diaz, Kimbrel, Osuna, Giles and Davis owners probably would not complain. Luck played a part of drafting saves last year, as avoiding the landmines paid off. Owners who targeted Greg Holland or late round thunder picks like Brad Hand or Felipe Rivero also did very well last year. Paying attention to saves provides the chance of dividends, but it takes work. For a sneak preview, here’s this years ADP’s (as of February 17th) with the other columns updated with last year’s results:

Since no tangible information regarding to how these pitchers end up will be available until after 2018 plays out, it’s all conjecture. It feels like Jansen’s a safe pick but with his draft price escalating, there’s zero room for profit. Same goes for Kimbrel who proved to be a bargain last year, but comes at full price paying for a career year.

Although Chapman’s yet to reach the 40-save mark, he’s still targeted for his high strikeout upside. His finish to the year provides hope he can finally reach his career year, but time will tell. With saves in decline, targeting pitchers with a clear role seems necessary. Not settling into fixed patterns in drafts will be necessary to succeed, because as Bruce Lee taught us, the truth is outside of all fixed patterns. Adapt to the draft or auction your in.

Remaining pliable while addressing the need to procure saves will determine how a team will be put together. In order to remove a level of recency bias and let some numbers speak for themselves, here’s a couple of targets available outside the top-10 who could provide profit compared to their current price point.

Two of the three players listed above appear in the top-10 in NFBC ADP above. Player A closes for the Indians (Cody Allen), Player B makes multi-inning saves for the Reds (Raisel Iglesias) and Player C lost his job in Washington but turned things around in Oakland (Blake Treinen).

Using small samples to predict the future can be trifling, but, Player B (Wade Davis) will head to Colorado while Player A will replace him in Chicago (Brandon Morrow). Morrow took to relieving well and he’s presently available in the 13th round in NFBC drafts. In this case, taking the discount over perceived reliability.

Investing in saves and chasing them seems to be a personal preference. Trying to change a reader’s mind will not work unless one changes how the mind works. Sift through the data, note the trend of saves going down and adjust. Target a closer in the top two tiers, then add relievers with upside as the draft progresses. If 89 saves meant the 90th percentile last year, it’s one stud and two fill-ins from fruition when building a roster.

It feels like Edwin Diaz and Roberto Osuna seem primed to take a step back towards their old levels at a discount like Craig Kimbrel last year. Both Treinen and Morrow could hit from the middle rounds as discounts. As for a late round flier like Brad Hand or Felipe Rivero from last year, how about Keone Kela? He owns the skills, stands in line to potentially close but also comes with inherent risk regarding his health and maturity to handle the position. But, if the stars align, he’s 30 saves waiting to happen. Speaking of which, if Mark Melancon’s velocity returns, he’s a steal at his present cost. And somehow fantasy players seem to gloss over the fact Brad Hand’s struck out over 100 hitters in each of the last two seasons.

With so much volatility, taking the wait and see approach could also work. Target pitchers like Chad Green, Andrew Miller, Josh Hader and Yusmeiro Petit who provide strikeouts over multiple inning appearances to protect ratios with an occasional save? Late round guys like Emilio Pagan and Tom Koehler could also pay off in a similar role. Last but not least, do not forget about A.J. Minter who struck out 17 of the last 31 hitters he faced last year during his debut. This speaks as much to a lack of trust in Arodys Vizcaino along with the talent Minter possesses.

Baseball’s changing in regards to how it views saves. Fantasy owners will need to do the same in order to succeed. “Learn to adjust yourself to the conditions you have to endure, but make a point of trying to alter or correct conditions so that they are most favorable to you.”, William Frederick Book. Invest with eyes wide open this year and chase with a purpose. Some will depend on league format. NFBC draft and hold leagues pushes elite closers to the forefront due to no waivers to adjust to injury or lost roles. This year proves to be challenging regarding closers, draft wisely my friends.