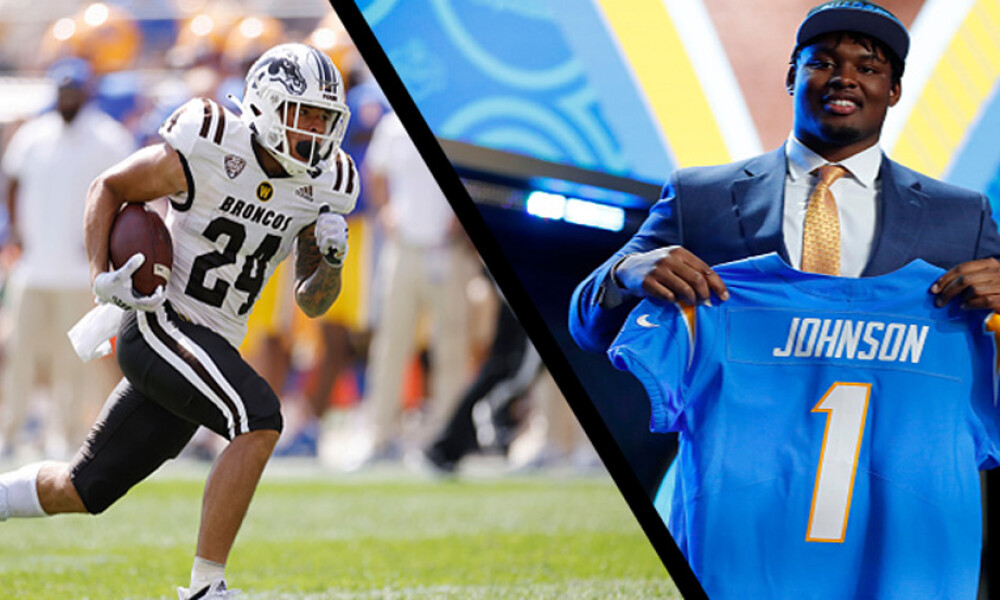 With the 2022 NFL Draft in the books, it's time to look toward the upcoming fantasy football season. Let's hand out draft grades for the AFC West teams. Whether you're preparing for dynasty rookie drafts, participating in fantasy football mock drafts, or drafting best ball fantasy teams – it's important to know the incoming NFL rookie class. Let's take a closer look at the best college football players who will make an impact on their new teams before you finalize those fantasy football rankings. Without further ado, head out to the AFC West for draft grades and best/worst picks for the Denver Broncos, Los Angeles Chargers, Kansas City Chiefs, and Las Vegas Raiders.

If you're looking for more NFL Draft grades for other divisions and teams, check out my other breakdowns here.

Outside of last year’s first-rounder Patrick Surtain II, the Broncos’ cornerback room was a bit questionable in terms of long-term stability. Ronald Darby and K’Waun Williams are there but Mathis will compete for starting reps right away and, at least, give Denver solid depth in the secondary. Mathis brings physicality, speed, and competitiveness to the corner position and should’ve been off the board earlier than No. 115 overall. It’s a great find for the Broncos in the fourth.

If the Broncos didn’t take Washington in the fifth round, he likely would’ve gone undrafted. It’s a bit of a reach on a smaller-bodied wide receiver (5-foot-10, 170 pounds) who might be limited to return duties at the NFL level. It’s worth noting that Denver did have a need for a kick/punt returner and Washington brings top-tier speed and touchdown-upside to the spot. Still, he likely won’t contribute much to the Broncos’ offense with Jerry Jeudy, Courtland Sutton, Tim Patrick, and KJ Hamler all ahead of him on the depth chart (at least). It’s tough to justify a fifth-round selection on a burner who may just be a return man in the NFL.

Despite not having a first-round pick due to the Russell Wilson trade, Denver still made nine picks in the draft after moving around a few times. The Broncos nailed their first selection with second-round pass-rusher Nik Bonitto, who will help fill the Von Miller-sized void on the edge. They also added tons of defensive depth besides Bonitto, including the aforementioned Damarri Mathis, safety Delarrin Turner-Yell, and defensive tackle Eyioma Uwazurike. Third-round TE Greg Dulcich gives Russell Wilson another reliable pass-catcher as well and is worth drafting in dynasty formats. At the very least, Dulcich has some amazing flow:

You can make an argument for a number of Kansas City’s picks being the best, but the Skyy Moore selection deserves specific praise. After opting not to trade one or both of their first-round picks to move up and get a top-tier wideout, the Chiefs instead got a steal in the second with Moore. The Western Michigan product arguably should’ve been off the board much earlier when teams went with other WR prospects instead. While Moore did play against lesser college competition in the MAC, his speed and receiving talent will give Patrick Mahomes another weapon and can help the KC offense replace Tyreek Hill.

Chenal is a fine prospect and violent tackler, but Kansas City fans probably would’ve liked to see an offensive player with this third-round pick. The Chiefs already went defense with three of their early-round picks with Trent McDuffie and George Karlfatis in the first and then Bryan Cook in the second. Plus, they spent second-round picks on inside linebackers the two previous drafts with Nick Bolton last year and Willie Gay Jr. in 2020. Though Chenal should be productive for the KC defense, this pick could’ve been used to add depth for the offensive line, running backs, or wideouts to help out Mahomes more.

Though we just knocked the Leo Chenal pick, it’s a slight blemish on an otherwise near-perfect draft for the Chiefs. Getting two both McDuffie and Karlaftis in the first round will boost the defense with a pair of Week 1 starters at two positions of need. The Skyy Moore pick, as outlined above, is a great find in the second round and he’ll be instantly relevant in fantasy football and dynasty leagues. Even Chenal and Bryan Cook in the second, though not flashy, will look better in a year or two once they have bigger roles on the Kansas City defense. Then, the front office snagged a couple more quality prospects in fourth-round corner Joshua Williams and fifth-round OL Darian Kinnard. All in all, a great draft for Andy Reid and Co. with a number of players who will positively impact the Super Bowl contenders right away.

The right side of the Chargers’ offensive line was an immediate need coming into the draft, and now they have a Day 1 starter at right guard. Zion Johnson is NFL-ready and was viewed as the best interior lineman of the draft – but he fell down to No. 17 overall with teams valuing other positions more. Los Angeles can plug Johnson in at RG and feel great about the added protection for Justin Herbert, which seemed like a rightful top priority in this draft. The versatility to play center is an added bonus, and it was on full display at the Senior Bowl:

It’s not that Woods is a bad player, by any means, it’s just that the Chargers could’ve gone with another position here in the third. They had more glaring defensive needs at edge rusher and cornerback coming into the draft and didn’t do much at all to address either position. Instead of Woods in the third, the Chargers could’ve gone elsewhere or even added a wide receiver or offensive lineman with this pick. Again, Woods is fine, but he’s currently a backup to Derwin James and Nasir Adderly.

Outside of Zion Johnson in the first, the Chargers didn’t add many prospects who will contribute Week 1 – which isn’t a great thing for a team looking to win a Super Bowl this season. Not having a second-round pick and taking a backup safety in the third (JT Woods) will do that. Isaiah Spiller in the fourth round, though, seems like a steal since he was projected to possibly go in the second as one of the top RBs outside of Breece Hall and Kenneth Walker. He’ll provide a nice backup and different skillset to Austin Ekeler in the backfield. Still, the Chargers left this draft with a hole still at right tackle.

After not having a first or second-round pick due to the Davante Adams trade, the Raiders’ first selection in the draft was that of Parham in the third. The Memphis product has the versatility to play either guard or center in the NFL and he actually logged double-digit starts at left guard, right guard, and right tackle in college. Many draft experts had Parham going a bit earlier than No. 90 overall, so the value looks nice for Las Vegas. Even if he doesn’t start right away as a rookie, Parham brings depth and flexibility to the Raiders' O-line.

Before taking Farrell, the Raiders already had multiple defensive tackles of the same mold. Jonathan Hankins, Kyle Peko, and Andrew Billings are similar run-stuffing nose tackles and Farrell seems a bit superfluous. The pick might be more of an eye towards the future as those aforementioned defensive tackles aren’t under contract for next season or beyond. Las Vegas then took another defensive tackle in the fifth round in Matthew Butler, who actually brings more pass-rushing upside into the mix than Farrell. Maybe the Raiders could’ve used the fourth-round selection to address another position of need?

Despite not having a pick until No. 90 overall, the Raiders did just enough with their six selections. Zamir White in the fourth round could spell the eventual writing on the wall for Josh Jacobs, especially after Las Vegas declined his fifth-year option for next season. We broke down the valuable pick of Parham in the third. Even though Farrell and Butler in the fourth and fifth are questionable, both players should help the defense be one of the league’s best against the run.