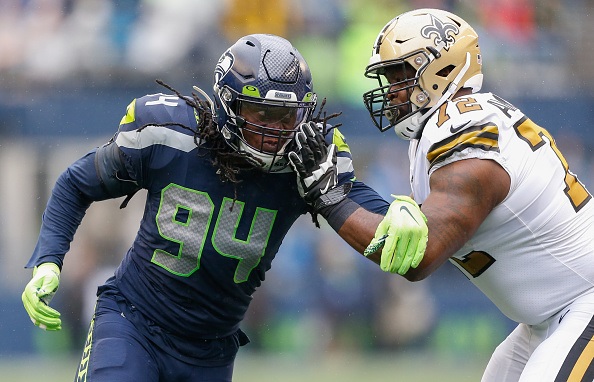 As the injuries mount, it becomes increasingly necessary to locate those waiver wire gems that are owned in few leagues that can fill in the open slots in your IDP roster(s). Not a single CB to suggest this week, sad to say, but plenty of LBs and DEs to consider. Plus, be prepared for next week when the bye weeks step up from two teams to four that are idle.

Campbell did not seem at all hindered by his rib issue that limited his practice prior to the Week Four contest against the visiting Titans, rolling up with 17 total tackles (TT), seven of those of the solo variety and two for a loss of yards (TFL). He also contributed some big plays with two forced fumbles (FF).

On the other side of the field in Week Four, Evans continued to shine, despite seeing a decrease in snaps on defense due to Atlanta’s reliance on their passing attack to get back into the game. He did collect half a sack, and two QB hurries/hits (QH) to go with his 10 TT (five solo), and his efforts helped hold Devonta Freeman to just 28 yards.

Kendricks picked up a pair of sacks as a blitzing LB against the Cardinals in Week Four, to go along with a pair of QH. He also contributed with six TT (five solo, two TFL) and is seeing plenty of PT with the Seahawks favoring a 4-3 defensive scheme primarily.

The Viking LB is posting numbers we have not seen since his rookie season back in 2015. He has 33 TT on the season after collecting a dozen against the division-rival Bears in Week Four’s contest. In tackle-oriented leagues, he is once again a valued IDP.

Davis put up double digit tackles against the Jags in Week Four, with 12 TT (seven solo) and also adding in a QH to avoid being a tackle-only IDP option. After missing the season’s first two games, he has become essentially an every-down LB for the Broncos, and as such, should be considered for your roster, especially with the bye weeks ramping up soon.

Morrow figures to benefit tremendously due to the suspension of linebacker Vontaze Burfict , sliding into an outside LB slot. He is coming off a seven TT effort with a PD tossed in to pump up his value. A three-down LB on a bad team generally puts up better than respectable IDP numbers.

So long as Roquan Smith is absent from the field dealing with personal issues, Kwiatkoski looks to step in as a starting LB for the Bears. In that role against the Vikings in Week Four, he contributed big time with nine TT (eight solo) together with a sack and FF. Be advised that while starting, he is playing just over 50% of the snaps while the Chicago defense is on the field, which makes him more a bye-week fill in than a regular starter.

Simon has seen his playing time on defense increase steadily over the past three games, and he contributed with a sack and six TT (five solo, one TFL), as well as tossing in a pair of QH and a pass deflection (PD).

Charlton is on bye in Week Five, which means that if you have the room, he is sneaky pickup for your IDP ranks. He is coming off a six TT (four solo, one TFL) effort against the visiting Chargers, a game where he also contributed with a sack and two QH.

Ansah has always been productive when on the field, and has stayed upright so far this season, making him a valued fantasy DL. He had five solo tackles (one TFL) against the host Cardinals in Week Four, along with a sack and pair of QH to boost his production in big play leagues.

The Bear DE has been increasing his time on the gridiron as the season progresses, and has been improving his fantasy value with that development. He had seven TT (two TFL) against the visiting Vikings last week, netting a pair of sacks and QH both, plus recovering a fumble (FR) to further enhance his desirability for IDP owners.

Note that Irvin only has LB eligibility in ESPN leagues, but has dual LB/DL status in Yahoo. If you can grab him on that platform, though, having a LB who you can slot in at DL is huge advantage. In his first action of the season, he was credited with a sack and three TT, plus he has a good matchup against the Jaguars in Week Five on tap.

Our sole DT this week, the Chief defensive tackle showed some pass defense skills, with a sack of Matthew Stafford . He also added an FF and eight TT (five solo). He is a fine pickup in leagues that mandate use of a DT IDP

The Cleveland defensive back got the start due to Morgan Burnett ’s place on the sidelines, and produced with both tackles (eight TT, seven solo) and big plays: one INT, one FF, and a PD. So long as he is seeing significant playing time, he is worth employing on your defensive squad.

Reid was a tackle monster against the Panthers, collecting 10 TT, nine of those being solos. His tackle numbers make him a dependable defensive back who provides consistent fantasy production week in, week out, averaging better than eight TT per contest early this season.

The Colts could be without both Malik Hooker and Clayton Geathers , making Willis the next man up to see consistent snaps on defense. He had nine TT in Week Four (eight solo, one TFL) and also put up a PD against the visiting Raiders. His matchup against the Chiefs is not superb, and the week after that is the bye for the Colts, but things do get rosier on the schedule after that if he is still starting.

The veteran free safety continues to provide consistent production from the defensive backfield. In Week Four, he collected 15 TT against the Buccaneers, albeit in an offensive shootout of a game unlikely to be duplicated many times in 2019. He also had a couple of PDs in the loss to Tampa Bay.

This seemed inevitable, given his past behavior, but the league has suspended Burfict for the balance of the season. The linebacker is extraordinarily productive when on the field, but seems to continually miss time due to his own acts.

None to write about this week, except for those populating the Injury Report below.

The veteran defensive back has accrued just three solo tackles in his last two contests. That sort of production makes him worthy of being subtracted from any roster where he is taking up space. Racking up just two solo tackles in a wide-open game where the opposing offense threw 68 passes is unacceptable.

Remember, the first team listed is the one to use your IDPs against. Do not go crazy, and play a LB5 against the Panthers or Browns, but certainly you will do well if you own a top DL on the Buffalo that you can plug in this week, for the most part.

Bruce Irvin DE CAR (Yahoo only, he is a LB in ESPN leagues)

As ever, good luck and Godspeed in your fantasy efforts. Make sure to read all of our great articles to help you win your fantasy match ups every week and ultimately bask in championship glory.FANation Chat is now live on the site, to help you work through your fantasy football dilemmas. Or if you have any fantasy football questions, especially about IDP leagues, you can also send a message to ia@fantasyalarm.com for a personal response from the writer of this article. Naturally, the more detail you can send about your league, such as number of teams, platform you play in (Yahoo, ESPN, etc.), scoring and roster system, the better the ability to provide accurate advice.