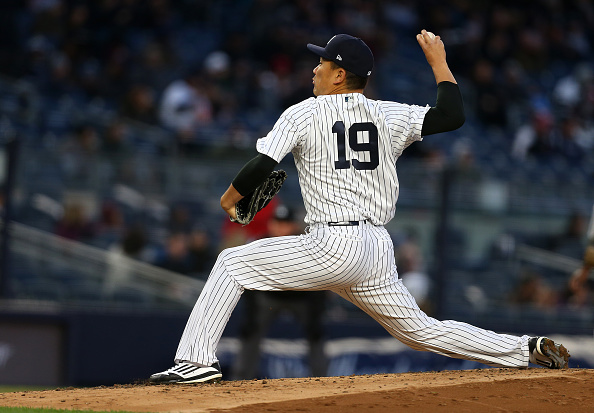 Due to unavoidable circumstances for your scribe, this week’s Two-Start Pitcher report is being compiled mid-week instead of on the weekend, as is normally the procedure. Thus, you are cautioned that some of the pitchers previewed here may not be on schedule for a pair of appearances in Week 3 as injuries (hello, Brandon McCarthy ), weather conditions and general early season craziness shake out. Questions submitted regarding developments at the end of this week will be answered Sunday afternoon, once I again have internet access.

*IMPORTANT* So currently the 2nd game of the NYY/DET double header is still scheduled to be played today. Keep an eye on that one because if it's delayed it may shake some things up with two-start pitchers for those two teams.

A nice batch of two-start options in the upper tier. If you own any of these SPs, plug them in and expect good results. Snell is a recent addition to the upper echelon, with two good home matchups in Week 3. McCullers is coming off an awful game in Minnesota, but his pedigree gives him a bit of latitude. If you are concerned, though, do not expect any guff for hedging your bets with the Houston hurler.

Kennedy was an ineffective disaster in 2017 over his 30 starts but has been extremely sharp in early 2018. He is going to be a part of the Royals’ rotation given his long-term contract (three more years at $49 million), and the early returns give hope that he has again figured out how to be a productive starting pitcher. A 13:2 K/BB ratio over his first two starts looks promising, although two road starts in Week 3 do temper the early enthusiasm he has generated.

Sanchez is coming off a strong start, going eight innings against the Orioles on the road, and allowing just a single earned run. He did struggle somewhat in his first two starts, but he was superb in 2016 before his injury-shortened 2017 (blisters), winning the AL ERA title. He has a home game against the Royals before heading to Yankee Stadium in Week 3, so the first start is where you likely want to employ his services if you are not comfortable with using him for both his trips to the hill.

Another Blue Jay starter, Estrada, has a pair of starts in Week 3, also getting the Royals at Rogers Centre before heading to the Big Apple to end the week. He has not been missing bats at his usual pace but has been exhibiting good, if not great, control early on in 2018. As with his teammate, his first start is the best option for the coming scoring period.

Gibson gets Cleveland at home, and the Indians have not been looking like world beaters early on this season. He then takes on the Devil Rays on the road, another decent matchup as things are playing out so far. He needs to keep the ball in the park and has been successful with that so far this season (it is early, admittedly), and while he only issued one walk in his last outing, the five in his first start are worrisome, as his lack of control has been an issue in prior seasons.

Ryu is an inconsistent option, as witnessed by first two starts. He was roughed up by the Diamondbacks, lasting just 3.2 innings and yielding three earned runs in his first start, then shutting out the A’s over six complete innings in Week 2, racking up eight Ks in that effort. He heads to San Diego for his first start next week, which looks favorable, and while he has to face the Nationals in his second outing, that start is at Dodger Stadium, another plus.

Williams may be 2-0 for 2018, but a 5:6 K/BB ratio is not a ringing endorsement for a starting pitcher by any means. Do not be fooled by his 1.59 ERA, as he sports an ugly 1.41 WHIP over his 11.1 innings. His FIP is at 3.91, and he looks like a regression candidate with an unsustainable .271 BABIP and 87.5% strand rate. He is a matchup dependent streaming option, which means consider him when Colorado comes to visit PNC Park, but hesitate to use him in Philly at the end of the scoring period.

Foltynewicz is a tempting SP, with the ability to rack up Ks. The problem with him is that he never seems able to dominate opposing lineups and struggled against left-handed batters last season. His home park is a concern as well, and both his starts this week are in Atlanta. The Atlanta righthander is having early success, though, and has always been a pitcher with the potential to shine so long as he can miss enough bats, which he is doing well in March and April, at least until he faced the Nationals in his last start.

Cashner has limited the Yankees and Blue Jays to just one earned run over his last two starts, spanning 13 innings, which gives hope that he will be useful as a back of the rotation fantasy option. He is still walking too many, and his elevated FIP over the past couple of seasons is still sticking with him in 2018, settling in at an unattractive 5.81, as opposed to his season 2.50 ERA. An unsustainable .187 BABIP also hints at a coming regression, and he has a couple of potential tough matchups with Boston and Cleveland in Week 3. He could continue to provide good results, but at some point, he will return to what he has been the past couple of seasons, a mediocre, low strikeout SP.

Brault is 2-0 on the season, having prevailed in his first start of the season. With Joe Musgrave heading to the DL, he could stick in the rotation for the time being. He offers average strikeout potential but needs to get his control in order to be considered as anything more than a matchup streaming option right now. He does get Colorado at home but then heads to Philly for his second start in Week 3, which is a less desirable situation.

Suter did not look good in his first two starts to open the season but managed to hold the Cards to just one earned run until he ran out of gas the third time through the lineup and was lifted in the sixth inning. He has a couple of home games, against the Reds and Marlins, in Week 3, so the pending matchups are favorable. It is difficult to give him a ringing endorsement, though, but if desperate, he could provide some decent innings and a few Ks.

McCarthy suffered a subluxation (partial dislocation) of his left/non-throwing shoulder in the game played on Wednesday afternoon, and is considered day-to-day as of this writing. He may hit the DL, miss a start or perhaps he will take his regular turns next week. He was looking sharp against the Nationals prior to his injury and would have been ranked higher in this tier prior to hurting his shoulder. Keep an eye on his status going forward.

This group does have some pitchers that may not stick in the bottom tier for long. Castillo, Duffy and Gausman all were likely drafted in most leagues before the season began, especially the Reds youngster. Presently, however, they are not trustworthy to run out there in your lineups, especially for two starts. Situations change, of course, and all three SPs come with scrutiny. If their production improves, then any or all of these SPs become useful, as streamers or rotation regulars. The balance of the pitchers in the bottom tier should be avoided in Week 3, however, as all have the potential to derail your fantasy efforts this coming week.