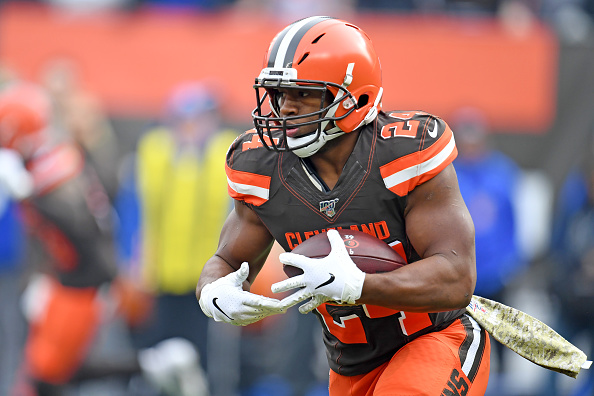 We are heading into Week five of the 2020 NFL season and this is your early-week NFL Injury Report brought to you by Fantasy Alarm! Lots of injury news once again after Week four has concluded to keep an eye on, so let’s see what we got!

Will this finally be the week that we see the return of MT? The Saints are off until Monday Night Football this week, so this ought to give Thomas ample time to hopefully be fully recovered from his high-ankle sprain that has shelved him over the last few weeks. Thomas was a limited participant mostly all of the practices for Week four, so his return is prominent to happen very soon. Keep an eye on his status closer to the weekend.

Oh no, the same hamstring that Julio had been hampered by all week long leading up to Week four was the achillies heel that kept him out of the second-half of the Falcon’s Monday night game against the Packers. It was reported near half-time that Head Coach Dan Quinn mentioned that Julio would only be used on special occasions for the rest of the game, however, Jones never returned to the sideline after the intermission. The Falcons, who now sit at 0-4 on the season, likely should elect to let Jones get fully healthy before putting him back in to the starting lineup, but it is the Falcons after all.

Evans hit the injury report after missing the Buccaneer’s first two practices of the week on Monday and Tuesday with what appears to be an ankle ailment. Evans hasn’t fully been labeled with a designation at the current moment, however, if he is not able to give practice a go on Wednesday, there will at least be a questionable tag placed on him heading into the latter part of the week.

Starting running back for the Browns Nick Chubb was placed on the Injured Reserve list on Monday after suffering a MCL sprain to his knee in the Brown’s Week four match with the Cowboys. The injury has been given a time-table of roughly six weeks for recovery, and although it does sound bad, this is actually good news, as this knee injury won’t require any kind of operation to fix. Look for Kareem Hunt to man most of the lead running back duties for the Browns as Chubb starts the road to recovery.

Ekeler suffered a hamstring injury in the Charger’s Week four tilt against the Buccaneers on Sunday. It has first been diagnosed as a “grade-two” sprain and with that grade it comes with a lead-time of 4-6 weeks before Ekeler will be able to return to the field. However, Ekeler has been noted mentioning that he is seeking a second opinion on the injury, so we will monitor the reports to see if anything changes as far as Ekeler’s down-time is concerned. Look for Both Joshua Kelley and Justin Jackson to see extended reps in the backfield for the Chargers for a few weeks.

Godwin is still dealing with a tweaked hamstring that ultimately held him out of Week four. Obviously, the hamstring hasn’t progressed very much as Godwin was not able to participate in Monday or Tuesday’s practices so far for Week five. There is nothing officially saying that Godwin is looking to sit, or play, at this current moment, but the indications by no practice are not a great sign. We will continue to monitor.

Mostert has yet to partake in any practice yet so far for Week five, however, Head Coach Kyle Shanahan is eyeing a return to practice for him on Wednesday of this week. If this does happen to all go according to plan, and he does return on Wednesday, we could easily see Mostert make his return after suffering a knee injury in Week two that has already taken two games from him. I know Mostert fantasy backers are chomping at the bit to get him back in action, so this would definitely be a sight for sore eyes if he does participate Wednesday. More to come on his status by Friday hopefully.

Fant is being labeled week-to-week at the current moment after suffering an ankle injury in Week four against the New York Jets. It has pretty much already been deemed that he will not play in Week five against the Patriots, and his status for Week six could also be in jeopardy. The good news is this is not a season-ending type injury; however, it could be a few weeks before Fant is able to return to the field again.

It somewhat appears the Brown “could” potentially be cleared to resume Titan’s practices as early as Wednesday of this week, or at least that is the earliest date that is being reported as a potential return day. Brown suffered a deep bone bruise in his knee during the Titan’s Week one match against the Broncos and has been shelved ever since. We must also remember that the Titans have yet to re-open their facilities after the Covid positive tests, but signs are pointing in the right direction. However, this also doesn’t fully mean that the Titans do hold a practice session on Wednesday, and if they do not, then likely Thursday may be out first chance to see if Brown is involved.

Fournette sat out of the Buccaneer’s Week four match up against the Chargers on Sunday and is now being labeled a potential “game-time” call for the Buccaneer’s quick-turn around game on Thursday Night Football against the Bears. Head Coach Bruce Arians did report that Fournette was showing some positive direction towards the ankle in practice so far this week, but not sure if he will be able to give it a go just yet. This situation likely will not unfold until late Wednesday or even Thursday before the game.

Cook has already missed one week of the season during Week four with a groin injury that he sustained in Week three against the Packers. Cook has yet to be reported on out of Saint’s practice so far this week, and in that event is in jeopardy of missing a second-straight game in Week five, however, we will continue to monitor his status closer towards the end of the week to check in on his availability for the Saint’s match against the Chargers.

The year of the hamstring injuries is what 2020 is shaping up to be, among other things. Jackson missed the Eagle’s Week four game against the Niners and could be looking at missing a second-straight game as well as there have been no reports of him at practice as of the beginning of this week. This surely doesn’t officially mean he could not play, but we obviously will need to keep an eye on his status later this week. The Eagles are already really thin at the WR spot, and him being back could provide a solid boost.

Starting RB for the New England Patriots Sony Michel was placed on the Injured Reserve list on Monday after sustaining a quad injury in the prior week leading up to Week four. With the Patriots taking Damien Harris off the IR list, Michel was next to go on it, but this at least means that Michel likely will be back in just a few weeks, if not sooner. For now, look for Harris, Burkhead, and James White to get shares in the backfield for the Pats going forward.

Miller was not able to take the practice field on Tuesday of this week for the Buccaneers as it is being reported that he is deal with a hip and groin issue after the Buccaneer’s game against the Chargers on Sunday. As you may have already noted, both Evans and Godwin are also both in fear of missing time, and if Miller is also placed in that category, the Buccaneers could be looking to some major back-up plans at the wide-out spot. We will continue to monitor Miller’s practice activity heading into the latter part of the week.

Another Buccaneer dealing with an injury, except this one will look to keep Shady McCoy out of the Buccaneer’s Week five match against the Bears on Thursday Night Football. McCoy suffered what is being diagnosed as a “Grade two ankle sprain” and is being labeled as week-to-week on when he may return to the playing field. It seems that McCoy may only be threatened by missing a single game, however, we will have to check back in next week to see how this ankle injury plays out.

Hyde is still dealing with a shoulder injury that placed on him on the sideline for the Hawk’s most recent game on Sunday against the Dolphins. He was a game-time call up until pretty much hours before the game on Sunday, before ultimately being ruled out for it. Head Coach Pete Carroll reported on Monday of this week that Hyde’s shoulder status is still yet to be determined for Week five’s match against the Vikings. A status to watch heading into the weekend.

Head Coach Kyle Shanahan said that he was “not sure, totally” when asked about the return of Jimmy Grapes for Week five after the Niners were handed a loss at the hands of the Philadelphia Eagles on Sunday Night Football. It was also noted that Jimmy has yet to retake the practice field yet, and that his side workouts have been good, and hopefully they will see if he can participate in practice on Wednesday.

It may be earlier than expected for Lock to return to the Broncos starting lineup at the signal-caller. Lock was not placed on the IR list due to the feeling that he would likely be able to make a return before a three-week deadline, and this appears that it could possibly be truer than expected. Head Coach Vic Fangio is optimistic about his status so far, and he thinks Lock could take the field. We will continue to monitor this progress before Thursday’s game.