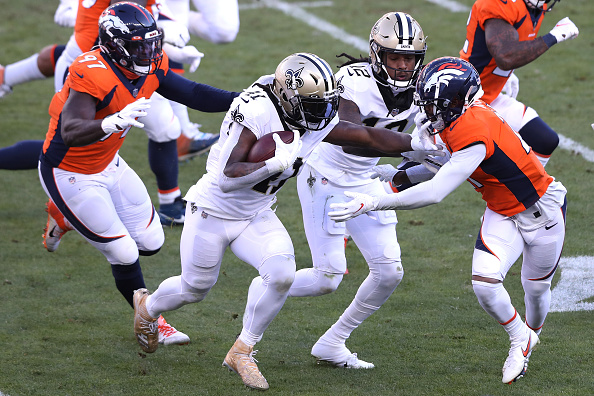 Whelp if you’re an Alvin Kamara owner Week 12 wasn’t much fun was it?  You watched Taysom Hill rush for two touchdowns for the second straight week and to make matters worse Latavius Murray rushed for two touchdowns in Week 12 against the Broncos. Murray toted the rock 19 times for 124 yards while Hill finished with 10 carries for 44 yards. In each of the last two games Murray and Hill have had double-digit rushing attempts as the Saints offense has morphed into a three-speared rushing attack. If you roster Kamara then you sort of knew that Taysom Hill was going to be bad for business after being named the starting QB, but will it really be this bad over the remainder of the fantasy football season? Has the top fantasy running back now become a roster liability for those that drafted him? Is there any hope that he can get it going? Let’s take a look at the last two weeks and preview what’s ahead.

In the two weeks since Hill was named the starting quarterback Kamara has rushed for 99 yards and a touchdown on 24 carries with just one catch on three targets for negative two yards.

In Week 11 he ran a season low nine routes after having never registered less than 16 routes in any game this year. His snap share was also the lowest of the season as he saw just 48-percent of the offensive snaps.

Conversely, the 50-percent offensive snap share that Latavius Murray saw in Week 11 was his highest total of the year.

In Week 12 it was much of the same as the Saints offense is much more run heavy with Hill under center. Kamara had a solid showing on the ground in this game against the Broncos, averaging 4.9 yards per carry but given the blowout nature the Saints felt more inclined to save him from potential injury, Kamara was on the injury report this week as it was, and instead they fed Murray to close out the game. Ultimately the snap share between Murray and Kamara was split but it's clear who had the bigger day. Hard to hold the game flow against Kamara but more of the same could be on the horizon.

Again, we knew that Hill becoming the starting QB could have a negative impact on Kamara but the reality of the situation coupled with just how big of drop off in fantasy production we have seen from Kamara’s value is really starting to set in and is a kick to the gut to those who have him on their roster this season.

By now you have to be wondering if there is any hope that Kamara returns to the fantasy running back that was the top scorer in half-point PPR leagues through the first 10 weeks of the season and I’m honestly not sure. Any glimmer of hope rests on the fractured ribs and collapsed lung of Drew Brees . Brees was placed on IR and some early reports suggested that he would only miss the minimum three weeks and that would mean he is back for Week 14. Brees returning would restore order back into the Saints offense and thus give Kamara back his RB1 upside. However, until then, it is going to be an absolute battle for Kamara in my opinion. In Week 13 the Saints face the same Falcons team they dismantled in Week 11 and in Week 14 they face the Eagles who have problems on both sides of the football. Both games the Saints should have little trouble with and therefore could lean more on someone like Latavius Murray to handle grunt work while Kamara is left with 10-to-12 touches.

Truthfully, the Saints may not need Brees to come back any time soon.The matchups against the Falcons and Eagles are far from tough competition as I previously stated. If the Saints decide to take it slow with Brees’ recovery then we may not see him until Week 15 against the Chiefs and that would mean the potential for two more weeks with Taysom Hill under center and two more weeks where those who roster Kamara are on edge when it comes to his fantasy upside.

Here’s to hoping for better weeks ahead!