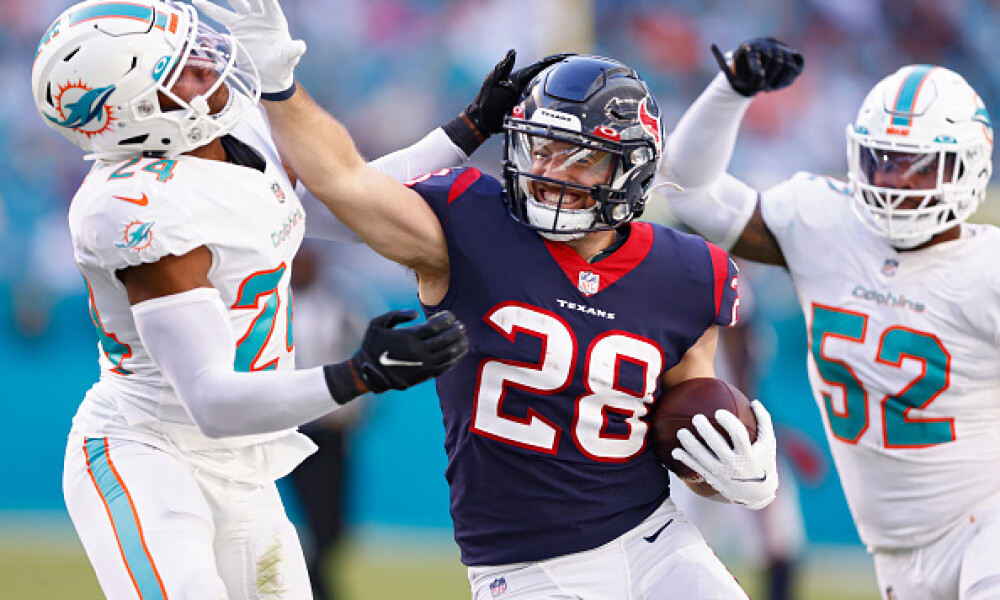 Fantasy managers will again have to closely monitor the injury report as kick offs approach this week. We left him off the grid because as this article is being written his status was unclear, but there’s a chance that Browns RB Kareem Hunt could be active in Week 12. With the Browns playing the Ravens who’ve given up the eighth most receiving yards to RBs Hunt could have a big day.

Cordarrelle Patterson, who was out Week 11 due to an ankle injury, seems likely to play in Week 12 against the Jaguars. That would mean that Qadree Ellison would be sent back to the Falcons’ practice squad this week. Eagles RB Jordan Howard is expected to miss Week 12 due to a knee sprain. Tony Jones Jr. could be the last back standing if both Alvin Kamara and Mark Ingram are sidelined for the Saints this week.

Fantasy managers will also be watching Packers RB Aaron Jones and 49ers RB Elijah Mitchell’s status closely this week as well. Here are a few other NFL backfields to keep your eye on as Week 12 approaches.

The Texans are moving forward with a two headed monster operating out of their backfield. They waived two-time 1000-yard rusher Phillip Lindsay on Tuesday. Rex Burkhead has good hands for a RB, but he’ll likely operate as the Texans’ early down back. David Johnson should take some early down carries as well, but he should also see plenty of action as the Texans’ pass catching back. Depending on where he lands Lindsay could have some fantasy appeal. He has a 4.6 career average YPC and is a good receiver as well. At 3-7 the Seahawks are barely clinging to a chance at a playoff spot, but they could use a back like Lindsay. The Ravens and 49ers are two other teams that could use Lindsay’s services.

The Titans must have liked what they saw from Dontrell Hilliard in Week 11 because they waived future hall of fame RB Adrian Peterson and promoted Hilliard to their active roster on Tuesday. Hilliard rushed for 35 yards on seven carries and filled Jeremy McNichols’ role as the team’s pass catching back this Sunday. With McNichols in the league’s concussion protocol Hilliard secured eight of his 10 targets for 47 yards in Week 11. Look for Hilliard to be a good option in PPR scoring in Week 12 if McNichols is sidelined again. Unfortunately, his long-term outlook will be limited once McNichols returns to action. It seems that the Titans, who prefer to run the ball, will continue to juggle their RBs around on a weekly basis depending on their matchup and the health of their backs. With Peterson no longer on the roster D’Onta Foreman should get a steady chunk of the team’s early down carries. When McNichols returns, he and Hilliard will likely split a few early down carries and some of the pass catching duties.

Not much has gone right this season for the Jets, but at least it looked as if they had found their lead RB for the near future in Michael Carter. Sadly, Carter is expected to miss at least two and as many as four weeks due to a high ankle sprain. Carter has been a tremendous part of the Jets offense both on the ground (430 rushing yards) and through the air (32 catches for 308 yards). Look for Tevin Coleman and Ty Johnson to each get their fair share of work in the Jets backfield in Week 12 with one or the other possibly taking over as the game progresses. Coleman had five carries to Johnson’s one in Week 12. Both are good pass catching backs, but Johnson ran slightly more routes (13) than Coleman (10) last week. They face the Texans in Week 12, and they’ve given up the second most rushing yards to RBs this season.