Brandon Marianne Lee continues her Stats You Need to Know series with the AFC West teams in order to help you make those tough decisions you'll face on Draft Day for you fantasy football league. 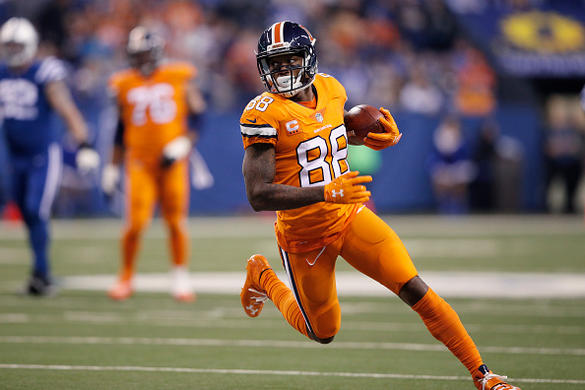 Quarterback play often holds back fantasy options in this division. And that may very well be the case in 2018.

Case Keenum is clearly an upgrade to Trevor Siemian , but how much of an upgrade is of debate.

Patrick Mahomes has a big arm, but so far in camp most the buzz surrounds his tendency to throw interceptions. At an alarming rate.

Philip Rivers has always been the side-arm kind of thrower, but is he running out of gas in that tank?

And Derek Carr is always supposed to “break out,” but below you’ll read about how it never really happens. And he’s been in the league for four years…

The good news is that almost all of the players in the AFC West are already at a fantasy discount, with the risk factor built into their modest ADPs. But before you go discount shopping, make sure you know the facts.

On September 9, 1960, the Denver Broncos played in the first ever American Football League regular season game. They played the Boston Patriots....

J. Samuels - RB
PIT
The Athletic's Ed Bouchette believes Steelers RB Jaylen Samuels may not make the team.
It's a numbers game, and Samuel's roster spot may come down to the team's decision to keep either three or four traditional running backs. This offseason, the Steelers signed FB Derek Watt and drafted Anthony McFarland out of Maryland. Both acquisitions will make the roster, as will James Conner and Benny Snell. Bouchette notes that Samuels is likely competing with Kerrith Whyte in training camp for the final spot. Ultimately, Bouchette left Samuels off his initial 53-man roster projection. Samuels averaged 2.7 yards on his 67 carries and 5.4 yards on his 57 targets last season.
Added 12:37 am (EST)
Added 12:37 am (EST)

P. Barber - RB
WAS
ESPN's John Keim reports Washington believes RB Peyton Barber has "every-down ability."
Washington RB coach Randy Jordan also said, "He gives you thump just like Adrian Peterson does. He's a pro's pro." Barber played more than half of the Bucs' offensive snaps in 2018 when he handled 234 carries and 29 targets, but he has been a committee back in his other three seasons. This year, he'll compete with Adrian Peterson on early downs and Antonio Gibson on passing downs, with J.D. McKissic and Bryce Love also in the mix. It's a depth chart that is open for the taking following Derrius Guice's release, but it's hard to buy this report until we see how the team is splitting touches in actual training camp practices. Barber certainly is a wait-and-see fantasy asset in most leagues.
Added Yesterday 11:49 pm (EST)
Added Yesterday 11:49 pm (EST)

A. Peterson - RB
WAS1
Washington RB coach Randy Jordan believes the shortened offseason has helped Adrian Peterson "stay fresh."
Touches are up for grabs following Derrius Guice's release, and Peterson may get the first crack at them given his experience. Peterson figures to be the Week 1 starter and could hold onto his early-down role for much of the season. How valuable that role is for fantasy football, however, is a valid question. Peterson was barely a flex play last year despite seeing more than a dozen carries per game over certain stretches of the year. AP's ceiling is very low in this offense, but he may get in the way of the building Antonio Gibson hype. Expect to get some answers regarding the Washington depth chart in the back half of August training camp.
Added Yesterday 11:42 pm (EST)
Added Yesterday 11:42 pm (EST)

A. Gibson - RB
WAS
Washington RB coach Randy Jordan believes "it'll take time for Antonio Gibson to learn protections and to diagnose blitzes."
It's not a surprise to see Gibson's running back coach question if Gibson is ready for a full workload. Gibson only handled 77 touches throughout his Memphis career and split his time between running back and receiver. When Washington drafted Gibson, they likely planned on easing him in, but they may have to force the issue now that Derrius Guice is off the roster. Gibson is currently in meetings with both the running back and receiver groups as he learns how to run routes, read blocks, and work in pass protection. ESPN's John Keim believes the Memphis product is talented, but "in an odd offseason it could take time for him to grasp all that he needs to do in order to fully contribute." Gibson will battle Adrian Peterson, Peyton Barber, J.D. McKissic, and Bryce Love for playing time. He's a classic boom-bust mid-round pick.
Added Yesterday 11:24 pm (EST)
Added Yesterday 11:24 pm (EST)

B. Price - DL
JAC
Jaguars put DL Brian Price (knee) and DL Dontavius Russell (hip) on injured reserve.
Jacksonville's defensive depth has been wiped out over the past week after CB Rashaan Melvin, DE Lerentee McCray, and DT Al Woods opted out of the season. Meanwhile, franchise tagged DE Yannick Ngakoue is seeking a trade from Jacksonville and forgoing team activities. The team signed DT Caraun Reid and DB Tramaine Brock on Sunday. The Jaguars are shaping up as a defense for fantasy players to target this year.
Added Yesterday 8:03 pm (EST)
Added Yesterday 8:03 pm (EST)

D. Guice - RB
WAS
Free agent RB Derrius Guice cleared waivers.
Washington released Guice after he was arrested for domestic violence. Guice will face a lengthy suspension if a team is willing to take the PR hit and sign the running back. It's unlikely that he gets a second chance until his current charges are settled, and Guice came into the league already with off the field issues. Most, if not all, teams will have zero interest.
Added Yesterday 5:52 pm (EST)
Added Yesterday 5:52 pm (EST)

J. Taylor - RB
IND1
The Athletic's Zak Keefer wrote, "Jonathan Taylor is expected to share carries with starter Marlon Mack."
Keefer continues by writing, "don’t be surprised if the rookie has a few breakout games and Reich stays with him." It's the consensus projection for this backfield; Mack and Taylor will split carries initially, but Taylor can become the clear-cut starter if he lives up to his draft profile. For three years at Wisconsin, Taylor showed high-end rushing ability and proceeded to light up the NFL Combine with 4.39 speed. In a vacuum, Taylor is a higher ceiling player than Mack, who is in the final year of his rookie contract. By the second half of the 2020 season, it'd be surprising if Taylor wasn't seeing 15-plus touches weekly. Reaching for Taylor in redraft fantasy leagues is risky because Taylor may not secure passing-down work, but he's a fine pick late in the fourth round.
Added Yesterday 5:32 pm (EST)
Added Yesterday 5:32 pm (EST)