Adam Ronis opens up the Fantasy Football WR preview by looking at some targets who are currently undervalued at the position and are good bargains. 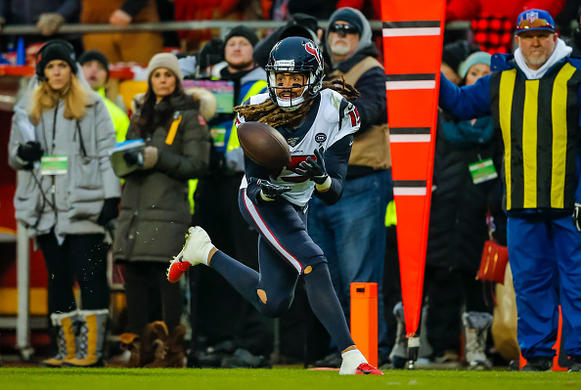 Drafts are underway but the volume is low and with free agency news still fresh, many players are undervalued. Here are several players that are good bargains in drafts at wide receiver.

Crowder doesn't have a big ceiling, but he has a high floor that can be useful depending on roster build. If you decide to take some risky receivers early on, Crowder is a safe play. Crowder had a 15-percent target share last season. The Jets lost Robby Anderson to the Panthers and the only addition so far has been Breshad Perriman . The Jets could draft a wide receiver, but Crowder is in a good spot as the slot receiver. He averaged 8.2 targets per game with Sam Darnold at quarterback. Crowder was the WR32 in PPR formats last season finishing with 78 catches for 833 yards with six touchdowns. He has an ADP of 119 in early FFPC Classic drafts.

Anyone with Fuller on their fantasy team the last few seasons is likely frustrated and won't want to invest. Staying on the field has been an issue for Fuller, but when he's played, especially with Deshaun Watson , he puts up numbers. The opportunity will grow with the departure of DeAndre Hopkins , who had 10.1 targets per game over the last two seasons. Hopkins had 150 targets last season. Fuller averaged 6.5 targets per game last season and if he can stay healthy, he could see 110-120 targets. Fuller has been in the NFL for four years and 14 games is the most he has played. Over the last three seasons, he has missed 20 games. Fuller's injury risk will be priced into his draft cost, but he has big upside.

Who led the Cowboys in yards per game last season? Most of you are saying Amari Cooper , but it was Gallup, who was sixth in the NFL with 79.07 yards per game, while Cooper had 74.31 yards per game. Gallup also had more targets per game with 8.1 compared to 7.4 for Cooper. Most of the time Cooper will get more attention and the tougher cornerback matchup, allowing Gallup to see an easier matchup. Cooper did play through injury last season, but throughout his career he has been inconsistent. Gallup took a big step in his second season with 66 catches for 1,106 yards and six touchdowns in 14 games, averaging 16.8 yards per catch. The Cowboys passed more last season and may continue to do so after losing a few key players on defense.

Johnson was thrown into a terrible situation last season and did well. The Steelers lost Ben Roethlisberger got injured in the second game of the season and finished the season with Mason Rudolph and Devlin Hodges at quarterback. James Conner and JuJu Smith-Schuster missed time with injuries and the offense was awful. Johnson was one of the bright spots. He was able to gain a lot of separation and had 59 catches for 680 yards and five touchdowns. Roethlisberger will be back and Johnson is currently going as the WR49 in early FFPC Classic drafts.

In every fantasy sport, most fantasy players don't like older players. They tend to go for the upside late in drafts and while it makes sense a lot of the time, the veteran can be a bargain and that's the case for Jones, who turned 30 on March 12. Injuries are always a concern with an aging player and Jones played nine games in 2018 and 13 last season, but the production is still good and he's cheap with a FFPC ADP of 120. Jones put up good numbers when Matthew Stafford played with 42 catches for 535 yards and six touchdowns in eight games. Jones has scored nine touchdowns in two of the last three seasons and has scored 23 over his last 36 games. The Lions offense took a huge hit without Stafford last season and it has made Jones a bargain. If Jones stays healthy, he's a good bet for 100-plus targets.