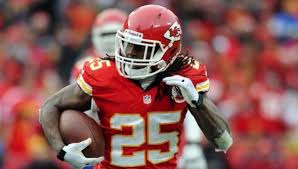 Amidst all of the drama with the NFL and Roger Goodell’s press conference is the fact that your fantasy football team is likely in disarray due to all of the suspensions and injuries.  Last week saw several major injuries to impact players, so let’s delve right into the updated status on several of them in this edition of the walking wounded.

If you didn’t know how quickly things change in a matter of days, look no further than Jamaal Charles’ situation this week.  He sustained what was classified as a “non-severe high ankle sprain” in last week’s game against Denver.  It was almost a foregone conclusion that he would miss this week’s game against Miami, but now it appears he will be a game-time decision after being limited in practice late in the week.  It is too risky to put him in your lineups since the Chiefs play late in the day on Sunday and a decision on his status probably won’t be provided with sufficient time.  It is a tough pill to swallow, but keep Charles on your bench unless we are made aware of a minor miracle prior to kickoff on Sunday.

Good news for fantast GM’s as A.J. Green has been upgraded to probable after going through a full practice on Friday.  However, it is always a concern when a player has a toe injury which can flare up at any time, especially for a wide receiver.  Despite that, you can confidently put Green in your lineup and hope that he can make up for the big fat zero he gave GM’s in Week 2.

Eric Decker has been held out of practice all week with a hamstring injury.  Despite that, it is expected that he will play on Monday night against the Bears.  The good news is that Rex Ryan has indicated that Decker doesn’t need to practice in order to play, and he will have an additional day of rest since the Jets play on Monday night.  Decker is a must-start as Geno Smith’s primary target and he has a favorable matchup against a suspect Bears’ defense.

In the wake of the Ray Rice drama, fantasy GM’s were hopeful that Bernard Pierce would step up and emerge as a viable RB1 option.  That has not happened thus far.  He is listed as questionable due to a thigh injury but did practice on Friday.  In all likelihood he will play this Sunday, but you can expect his workload to be limited with some opportunities given to Lorenzo Taliaferro.

Panthers’ rookie Kelvin Benjamin returned to practice on Thursday and is good to go for Sunday night’s game against Pittsburgh.  Benjamin was being given some rest as he practiced for the team’s full session.  He is a viable WR3 or Flex option in your lineup for Week 3.

Jordan Cameron was limited again in practice on Friday and is listed as questionable for the Browns’ upcoming game against the Ravens.  While we do not have much more clarity on whether Cameron will play, I think he will suit up and be Cleveland’s best option in the passing game.  When healthy and on the field, Cameron is a must-start so plan on putting him in your lineup.

Keenan Allen is listed as questionable for this Sunday’s game against Buffalo.  He has been limited in practice towards the end of the week with a groin injury.  It is good news that he did at least practice on Friday so it is more likely than not that he plays in Week 3.  The Chargers play an early game in Buffalo so you should know his fate in advance of having to set your lineups.  Allen is a must-start if active since San Diego’s running game is minimized with Ryan Mathews’ injury and the fact that Philip Rivers has been red hot.

Joique Bell was limited in practice this week with a knee injury, but he is listed as probable and will definitely play this Sunday against the Packers.  Bell is a solid option to start as a RB2 or a Flex against a Green Bay defense which has been susceptible to the run over the first two weeks.  Bell.

Hakeem Nicks has missed the past couple days of practice due to an illness.  He is listed as questionable for this week’s game against Jacksonville.  Nicks was a solid late round value pick in many drafts but he has failed to deliver results thus far.  Even if he does play, I would not recommend you start him unless you are decimated by injuries and need to plug him in as your Flex option.

Carson Palmer has been officially ruled out for this week’s game against San Francisco.  The Cardinals announced that Drew Stanton will start again as Palmer attempts to rehab from the nerve damage in his right shoulder.  Palmer’s absence against the 49ers on Sunday will have a negative effect on Larry Fitzgerald and Michael Floyd’s fantasy value.  Palmer’s status going forward is uncertain and it looks like this could be a long-term absence given the seriousness of having nerve damage in his throwing arm.