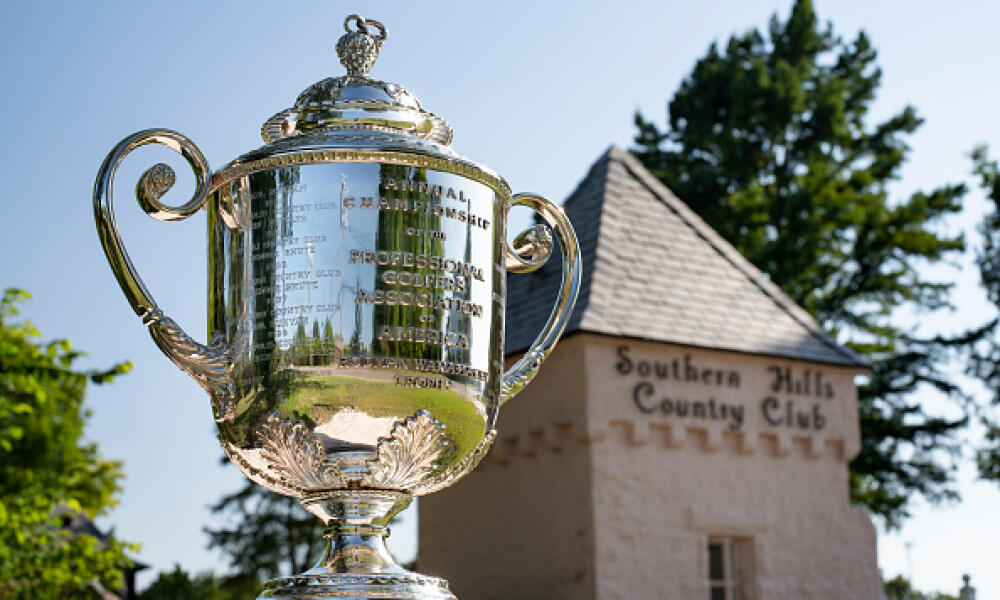 The 2021-2022 PGA Tour schedule takes us to Tulsa, Oklahoma for the 104th PGA Championship at Southern Hills Country Club.  This is the second major championship of the season and features 156 PGA Tour players and club professionals competing for the Wanamaker Trophy. The field is full of heavy hitters which makes deciding on the top PGA DFS picks this week a challenge.  Along with the PGA DFS lineup generator, the PGA DFS ownership projections is a great tool to use this week with the PGA DFS playbook when constructing your PGA DFS lineups.

The name that everyone wants to know about is not Tiger Woods, it’s Phil Mickelson.  The 50-year-old defending PGA Champion will not compete this weekend.  He stepped away from the game three month ago after his controversial comments about the Saudi Arabia-based Super Golf League.  He also withdrew from the Masters in April.  Aside from Phil, we will see Tiger Woods compete alongside 19 of the Top 20 players in the world.  Sungjae Im is the lone Top 20 player not competing because of a COVID positive test.  We will see world number one and FedEx Cup points leader Scottie Scheffler look to keep his historic run going in Tulsa this weekend.

Southern Hills was built in 1936 and has played host to seven major championships; three U.S. Opens and four PGA Championships.  It last hosted a major in 2007, the PGA Championship; a 32-year-old Tiger Woods took home the Wanamaker Trophy that year.  Only five players ended that tournament with a score under par.  It was renovated in 2019 to prepare for this tournament.  The course will play extremely difficult knowing that it could play as long as 7,556 yards and a Par 70.

We will see temperatures in the high 80s and low 90s to begin the week but remember it’ll be more of a dry heat in the sooner state.  There looks to be rain in the forecast for Friday afternoon/evening which will cool things down for the players competing on the weekend.  Rain should not play a big role in the outcome of this event which is a good thing.

How To Watch The PGA Championship

A full PGA DFS Playbook will be available on DFSAlarm.com Wednesday morning at 10am ET.  We will also have a full run of PGA DFS example lineups available beginning at 2:30pm ET.  We also help you with DFS lineup construction with our usual tools like our PGA DFS Lineup Generator and a full run of PGA DFS projections. My DFS approach this week will be to focus on the large field single entry tournaments.  I like to build one cash lineup and one GPP.

There is a lot to dissect and unpack with this championship.  So many different storylines and ways to attack this course, I look forward to getting more in-depth in my PGA DFS Playbook.  As always, I wish you nothing but the best of luck in your games.