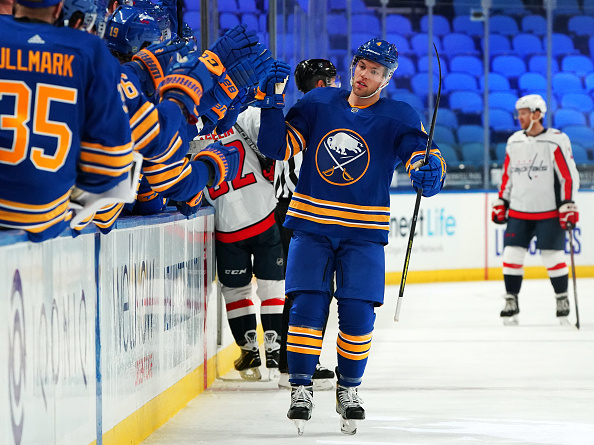 Follow our live blog for all of the NHL Trade Deadline moves, and a breakdown of how they might help your fantasy hockey teams. There are some big names that could be on the move with Taylor Hall and Patrik Laine likely available in the trade market.

This adds some valuable depth to their defensive core. Montour is a capable puck-moving player, who should fit in well in Florida. Expect Montour to slot into their top-six right away. I expect we will see a lot of accumulation of draft picks in Buffalo over the next few days.

This move comes as a bit of surprise it was known that the Avs needed a backup, but I'm not sure Dubnyk is an upgrade on Johansson who they acquired earlier in the month. That said they didn't give up much as Pateryn is a UFA after the season, and only played 11 games this year, and a 5th round pick is yet to break a team.

In a Three-Team Trade Between Tampa Bay, Detroit and Columbus, this is who each team is receiving

Tampa Bay gets the immediate help on defence adding David Savard , who is a stay at home defensive player, and will aid them more on their Stanley Cup run than your fantasy team, Tampa Bay also gets Brian Lashoff who will serve as depth and likely have no fantasy impact. Columbus does well in this trade, they get a 1st and a 3rd for Savard, and Detroit comes into this, I assume to eat some salary in exchange for a 4th round pick and moving the 30 year old Lashoff.

The Devils add a defenceman who can slot into their lineup every night, while the Capital move a player that wasn't seeing much playing time. Siegenthaler is an RFA at the end of the season, and probably won't cost the team too much to resign him. We'll see where he slots into the lineup, but he's not going to be fantasy relevant down the stretch.

The Montreal Canadiens placed Victor Mete on waivers today, so there was a growing sense that the team was looking to add another defenceman. Jon Merrill is a pending UFA at the end of the season a will most likely be the 7th defenceman on most nights. It's a depth move for Montreal, but is the 29-year-old really an upgrade from Mete?

For the Red Wings, they acquire a draft pick for a player they most likely weren't going to resign. Hayden Verbeek has yet to play a game in the NHL in his career, so moving to a team like Detroit definately gives him a better chance at cracking the roster moving forward.

This trade is meaningless at best for both teams, but we'll see if Marc Bergevin makes any other moves before the end of the day tomorrow. Montreal could use a puck moving defenceman, but it's unlikely that they acquire one by tomorrow.

Columbus Blue Jackets Trade Nick Foligno to the Toronto Maple Leafs for a 2021 1st Round Pick, and a 2022 4th Round Pick

Where Foligno slots into Toronto's lineup will ultimately decide how much his value increases. Go and get him in your league though, if he ends up on the top line with Matthews or really even the second line with Tavares, this could spark a bigger point output from him. This is a move to add grit for the Maple Leafs and there is some risk that he ultimately finds himself on the 3rd line, but when the entry fee is free, it's worth a shot. For the Blue Jackets, this will open up more time for their younger crop of players and will signify the opportunity for a new captain. Getting a 1st and a 4th for a rental player for Foligno's calibre is a good haul for Columbus.

Boston desperately need depth defencemen, and they get that in Reilly. He is idealy a bottom pair defecemen on this team, and should have little to no fantasy impact.

This trade signals that Andersen's injury was more than just a move to create cap space, Toronto's front office needs someone to backup Jack Campbell . Rittich is a capable goalie, who should be capable of handling 40 percent of the starts down the stretch. If you're streaming goalies in your fantasy playoffs, don't look past Rittich.

Buffalo Sabres Trade Taylor Hall and Curtis Lazar to the Boston Bruins for Anders Bjork , and a 2021 2nd Round Pick

This is likely as good of a landing spot as you could have found if you're Hall. He will play on the second line, and he should see time on the top power play. If Hall can't be successful here, I'm not certain where he can be successful at this point in his career. Lazar is a bottom-six forward, and will add depth to the Bruins, but have no fantasy impact. For the Sabres, they get a speedy winger in Bjork who should get more opportunities in Buffalo than he was getting in Boston. He was once thought to have top-line upside, but giving his overall lack of production at the NHL level, middle-six is more realistic. Buffalo also gets a 2nd round pick, which is well below what the Sabres were rumored to be asking for Hall, but I guess this was the best deal on the table.

So before we get too far into this, go get Carter from your waiver wire. He is almost certainly there, and he could be getting immediate time with Crosby. The two players have a history playing together on the Canadian Olympic teams, and I suspect Carter will slot right in. This is a really good trade for Hextall and the Penguins, they got a top six player, while giving up next to nothing. I suspect the low return is due to the Kings picking up part of Carter's salary, as he still has another year after this on his contract.

Nothing too exciting in this deal. Both players will serve as depth, with Vancouver getting a younger player in exchage for Gaudette who will likely play on the 3rd line for Chicago.

Kulikov will likely fit into the the Oilers top four defencemen. He is a solid defensive player, but doesn't offer anything statistically that should excite you from a fantasy perspective.

There isn't any immediate implications to this trade. Clauson will serve as a depth defenseman, and Chrona is a prospect goalie, who will move to a system where he has a change to get some playing time. He is currently at the University of Denver, so he would only be relavent in deeper dynasty formats.

Janmark adds some much needed center depth for the Golden Knights. He is likely to serve as a bottom six forward, but that was what we thought when Vegas acquired Chandler Stephenson too, so keep an eye out to see how he is used.

Soderberg will slot in as Colroado's third line centre. He is a useful player, who is capable of giving you a half point per game, and he should be familair with the Avalanche system as well having played there recently, but he will only be relavent in the deepest formats, and he is losing value in the trade. Rolston(son of former NHL'er Brian Rolston) is a 19 year old prosect who played at the Univeristy of Notre Dame last year, and Dickinson is a bit older at 23, and is becoming less of a prospect, who has spent the last three years between the AHL and ECHL.

Bennett finally gets his way, and gets out of Calgary, and to be fair, this is a nice haul for the Flames to get in return. Bennett has yet to provind more than 36 points in his career, so giving up a second round pick and a second round pick from last years draft feels a bit steep. Heineman projects to be a middle six forward who skates well and isn't afraid to go into the dirty areas.

This is an intersting move to make for the Canadians. Gustafsson hasn't played well in Philly, and is known to be an offense first type defensemen. The Flyers get a pick for a player they were rarely using, so this is a bit of a win for them.

Madison Bowey is 25-year-old, and he can still be a very good defenceman, but he barely played in Chicago, and hasn't done much in the NHL yet. We don't know yet if he's gonig to find a regular spot in the lineup, but from a fantasy perspective, he isn't a player worth adding.

The Wasington Capitals trade Richard Panik , Jakub Vrana , and 2021 First Round Pick and a 2022 Second Round Pick to the Detroit Red Wings for Anthony Mantha

I don't think anyone saw this trade coming, but the Washington Capital are getting serious about making a run for the Stanley Cup. They paid a steep price to acquire him, but Mantha is by far the best player in the deal, and I still believe he can be a 35-plus goal scorer in the NHL. He’s going to a better team, and that can only help his production.

For Detroit, they acquire a couple of picks, a depth player, and a young player who can score goals at a very fair salary cap hit. Jakob Vrana is going to get a chance to play in the tip-6, but can he actually produce on a terrible team? He’s an RFA at the end of the season, and Detroit clearly has the cap space to re-sign him. Mantha is signed for another three seasons after this one at $5.7M, which is a decent cap hit for a very good player.

Time will tell how this trade works out, but so far, I think both teams win this trade.

The Toronto Maple Leafs are just adding depth at this point. They look like a team that might make a long playoff run, and Leaf fans certainly hope they do. For Anaheim, it's moving a player for a pick as they continue to rebuild. Hutton isn't fantasy relevant, so nothing to look at from that angle.

Anaheim Ducks trade Jani Hakanpaa to the Carolina Hurricanes for Hayden Fleury.
Hayden Fleury couldn’t find a spot in the lineup, so he’s moved to a team where he can find a regular role. Again, nothing fantasy relevant here, so just continue on with your day.
San Jose Sharks trade Antti Suomela to the Toronto Maple Leafs for Alexander Barabanov.

The Leafs need to shed salary any time they can, and this was a move that does that. Barabanov is going to a pretty bad team, so he might get a chance to find a regular spot in the line. Suomela is going to head to the  taxi squad and probably not play another regular season game this year.

Ottawa Senators trade Erik Gudbranson to the Nashville Predators for Brandon Fortunato and a 2023 Seventh Round Pick.

For Ottawa, they get a young player and a meaningless pick. We’ll see if Fortunato finds an opportunity to play down the stretch, but moving an expiring contract for anything is always a win for a rebuilding team.

Philadelphia Flyers trade Michael Raffl and retain 25% of his salary to the Washingotn Capitals for a 2021 Fifth Round Pick.

The Washington Capitals aren’t messing around here, they are adding skill and depth to their lineup, and I love it! Is Michael Raffl any good? I mean, he could be, but he’s probably going to see most of his ice time on the third line, so fantasy wise, he’s not a player worth targeting.

For the Flyers, they continue to sell off pieces of their team since it’s looking like they are going to make the playoffs this season.