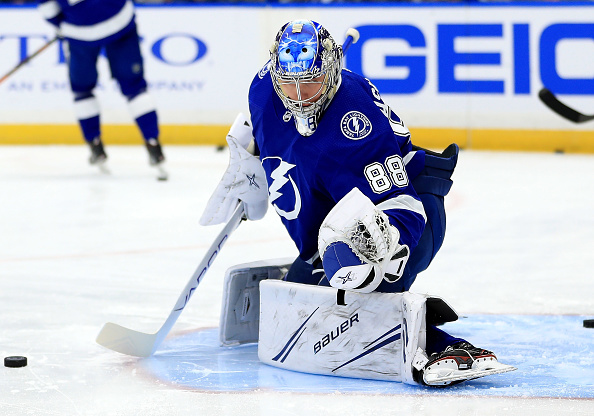 What a massive blow for the Tampa Bay Lightning. Vasilevskiy is confirmed to be out four-to-six weeks, but there’s a good chance that he’s out closer to the latter part. It’s hard to lose a number one goalie, especially an elite one. Tampa Bay will now rely on Louis Domingue to help keep the ship afloat for the next couple of weeks. As for fantasy owners, they will need to ride this one out. You can’t replace a player like Vasilevskiy, so you can only hope to stay alive (or make a decent trade) till he comes back.

Patrice Bergeron left last game due to an upper-body injury and his status for Saturday is questionable. Even if he does play, there’s a good chance that he isn’t 100% and that this injury could linger for some time. For now, it’s best to take a “wait and see” approach, but fantasy owners need to get ready should Bergeron miss some time.

Steen missed the previous game with an upper-body injury and he’s confirmed out for Saturday’s game too. It’s never a good sign when a team doesn’t disclose the seriousness of an injury, but the belief is that it isn’t something that will keep him out long-term. Steen isn’t the player he once was, but he can still be a good depth option on a lot of fantasy teams. If he doesn’t return by early next week, he can be dropped in standard leagues.

Looks like the New Jersey Devils will be without their best defenseman for the foreseeable future. Vatanen was placed on IR earlier in the week and the team has not provided any update on when he might return. Vatanen was the go-to guy on the top power play unit and could always be counted on to rack up some points. This loss will hurt the Devils more than it will hurt fantasy owners, but it’s still another injury with no timetable for a return. Expect the team to update his status over the next couple of weeks.

Another tough week for fantasy goalie. Elliott isn’t exactly an elite goalie in the league, but he’s the best goalie the Flyers have. Now he’s confirmed to be out for the next two weeks. The good news is the team doesn’t expect him to miss more than the two weeks, so fantasy owners can find a temporary solution till Elliott is back. Let’s hope he doesn’t suffer a setback from now till then.

Another elite player that is out for an undetermined amount of time. It seems like every player in the NHL is getting hurt! The loss of Subban is huge for the Predators and for fantasy owners. It’s impossible to replace him via the waiver wire, so most owners will just need to find a short-term solution while we get more information about when we can expect him to return. Not an ideal situation, but there’s nothing we can do.

It has not been fun being a Washington Capitals fan this week. To say the team is banged up is an understatement. As of Saturday night, there is no update as to if any of three will be ready to go Monday against the Canadiens. If you are in a weekly league and you own one (or more) of the three, you’ll need to keep your eyes open to reports on Monday. The Capitals don’t have a game before that, so fantasy owners may want to have a backup plan should any of the three not return early next week.