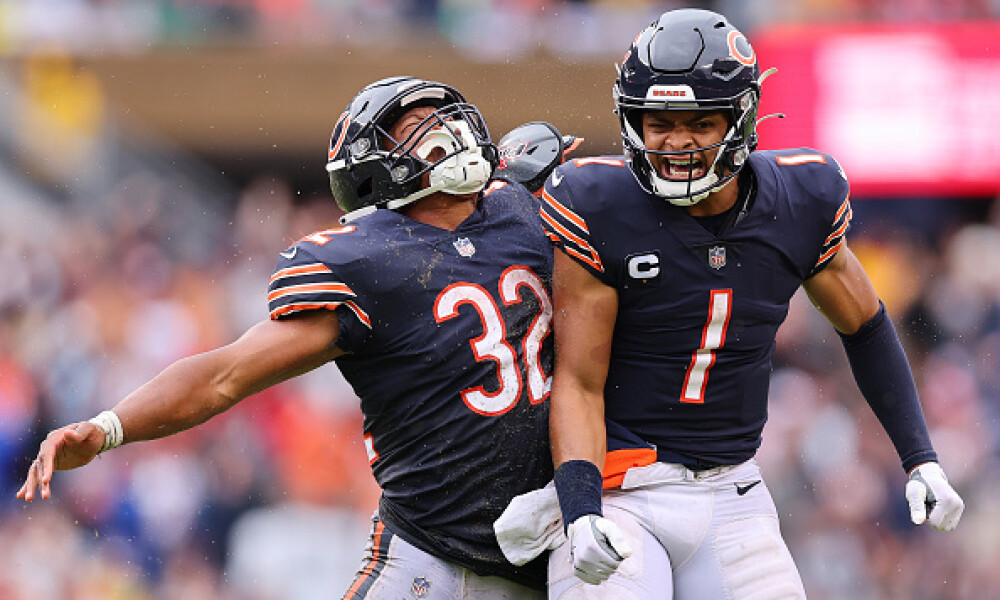 It’s Week 2 of Sunday Night Football. What better way is there to end your week than a little NFL DFS Showdown on DraftKings and FanDuel. Tonight’s slate has the Chicago Bears traveling to Green Bay for a game against the Packers that started with a 45.5 total but has dropped all the way down to 42, with Green Bay favored by a big 10 points. The Packers are coming off an embarrassing 23-7 loss to the Vikings while the Bears won in a sloppy monsoon-like game against the 49ers in Week 1. We have close to perfect weather tonight so let’s take a look at tonight’s SNF matchup between two NFC North rivals- the Bears and Packers..

Aaron Rodgers (GB) Classic bounce back spot for ARod, the reigning NFL MVP that owns Lambeau Field- especially on prime time- and the Bears (23-5 lifetime with a 109.2 passer rating). It certainly helps that ARod will get back RT Elgton Jenkins (knee) and WR1 Allen Lazard (ankle). A 25.5 team implied total makes Rodgers and his prime time magic a bit underpriced here .

Aaron Jones (GB) If you have been playing DFS for an amount of time you are well aware of the Aaron Jones “squeaky wheel”. Last week Jones only touched the ball eight times for 76 yards. HC Matt LaFleur has already commented that eight touches are not good enough and we have seen this happen many times over the years and the next week ends up being is a monster game from Jones. This is a pass catching back with a high floor and high ceiling.

Justin Fields (CHI) Last weeks game was a mess weather-wise, but Fields did show again that he can get it done on the ground and he has that slate-breaking upside. His 11 carries (28 yards) and 21% designed rushing attempts (courtesy of PFF) show that this is no longer a Nagy team (7% last season) and if the new regime continues to let Fields loose and design runs for him, we will see him nuke some slates. Just not sure about tonight where he is a double-digit underdog.

Packers DST  The Packers defense should smoke Justin Fields and a Chicago offensive line that is lacking talent. They were exposed by Minnesota last week but this week we see home field advantage on prime time as heavy favorites pressuring a young quarterback that is not immune to mistakes.

Darnell Mooney (CHI) Mooney has some upside tonight after the Packers were burned by Justin Jefferson (9-184-2) in Week 1. He gets a mulligan on last weeks 1-8-0 disaster due to the bad weather and is in play tonight due to being the Alpha (90% of routes run last week) of an otherwise poor remaining group of Bears receivers and a more. Mooney will have to face either Jaire Alexander outside or Rasul Douglas in the slot tonight and that will be no easy chore, but he is still cheap on DK ($7.8K) for his talent and work load in the passing attack.

David Montgomery (CHI) Montgomery is priced like a bell cow. He is coming off a 38 snap and 17 carry/four target game where he was on the field for 66% of the snaps so yes, we can consider that bell cow status. He also seems to have won the pass-catching back role but due to the huge spread it will be hard to pay off this salary. Now, if you think that the Bears will keep it close or even pull an upset then lock Montgomery into those game narrative lineups.

Khalil Herbert (CHI) Even though he was out-snapped (38 to 17) and out-touched (20 to 10) by David Montgomery, Hebert was the much more efficient runner last week. He carried the ball nine times for 45 yards and a score while Montgomery was 17-26-0.

AJ Dillon (GB) The Packers should have a big lead which will help Dillon’s workload and a very good chance of getting in the end zone. Dillon had the Packers lone touchdown, and I would bet we see at least another tonight. Aaron Jones will get more work, but Dillon should get at least 10-15 touches plus he is the clear option in goal situations for an offense that is lacking talent in the receiver’s room.

Allen Lazard (GB) Lazard, the main beneficiary of the Davante Adams departure, should make his season debut tonight but what kind of role will we see? A decoy? Half the snaps?  Lazard was limited all week, but Rodgers has made it known that he needs his main receiver back. He would immediately slide into the WR1 slot for the Packers if able to play and would be lining up against the weakest part of the Bears secondary tonight. If he plays you cannot expect a full go and Lazard would be a tournament option but if we get word that he is not limited - lock Lazard into a Captain spot in your GPPs.

Robert Tonyan (GB) Tonyan led packers in targets per route run (20%) and appears to be their top red-zone look. He also had a 36% snap share and 47% route share and turned his five targets into three catches for 36 yards. Tonyan would be more valuable in a game where the Packers are pass heavy and this may not be the night for it as they are heavy favorites.

Cole Kmet (CHI) Kmet will probably be very popular tonight due to his price (he dropped from $6.6K to $2.0K in one week on DK) and he may see some work due to the Packers having were the fourth-easiest matchup and the 6th most touchdowns allowed to tight ends in 2021. Even though Kmet did not catch the only ball thrown his way his week he did run a route on 71% of drop backs last week making that price drop from last week a little too much.  He was 7/66 receiving on 10 targets in two games against Green Bay last season.

Mason Crosby (GB)  With the Packers at home against a bad Bears team and double-digit favorites Crosby should have ample chances to put up points with a 26.5 team implied point total.

Ryan Griffin (CHI) Griffin is priced at the bare minimum and should at least contribute as he ran a route on 42% of dropbacks and played 30 snaps last week.  The Bears played had two TEs on the field for almost roughly 50% of the time last week and yes it could have been because of the weather but if it was part game plan then $200 on DK will allow you load up on studs in the rest of your lineup.

Equanimeous St. Brown (CHI) St. Brown is going to be unowned tonight as he is priced in the same area as Romeo Doubs, Randall Cobb and Tonyan. He tied Darnell Mooney with the most targets among Bears WRs in Week 1 (3) and finished 1-18-1. At the moment St. Brown is the clear WR2 and will be third in line for targets behind Mooney and David Montgomery plus may see some more targets with Velus Jones Jr doubtful (hamstring).