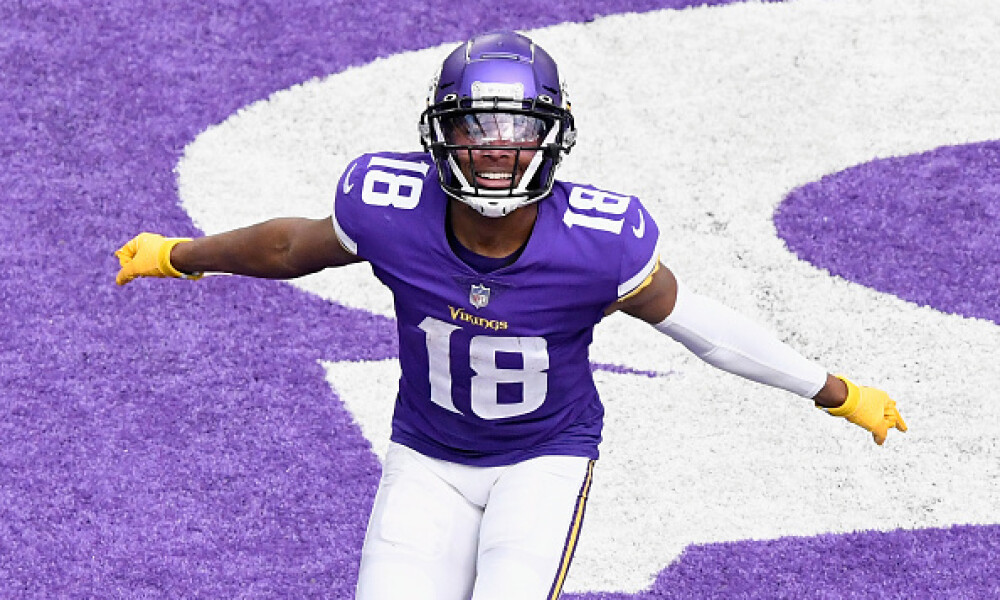 Week 2 of the NFL season is coming to an end on Monday Night Football, but they’re doing it in style with a second game for everyone playing NFL DFS. Usually this has been reserved for opening week festivities, but they’re bringing us an outstanding match-up that should close out the week on a very high note. The Minnesota Vikings and the Philadelphia Eagles have two of the most potent and exciting offenses in the league and this game could be an NFL DFS Week 2 dream. Kevin O’Connell has the Vikings offense humming while Year 2 of Nick Sirianni’s scheme in Philadelphia is looking to pay off massive dividends for those jumping into single-game Showdown contests. You can use a DFS lineup optimizer or a DFS Compare tool, but there are so many weapons and so many combinations, it’s going to be tough not to cash.

Jalen Hurts, QB PHI – He’s the perfect example of a good quarterback being great in fantasy and, as such, warrants a spot atop your lineups. Hurts rushed for 90 yards and a touchdown last week and has that rushing element that elevates the floor of any mobile quarterback. The pass-rush of the Vikings is underrated, but effective, so look for Hurts to get flushed out of the pocket often and increase his chances of adding more rushing yards. To be truly effective though, he is going to need to step up the passing game and if this one turns into a shootout, that should be on full display tonight.

Kirk Cousins, QB MIN – He is easily one of the more underrated quarterbacks in the fantasy realm, but will continue to turn heads this season with Kevin O’Connell’s new pass-heavy scheme. The Eagles did a fine job defending against the pass last week when they played the Lions, but this Vikings attack is at a whole other level. Cousins will have a supportive ground game to help open up the play-action and once that starts, look out! It’s going to be a fun one out there.

Justin Jefferson, WR MIN – We’re going to get to the point this year where we don’t even need to do write-ups for Jefferson. He is beyond elite and is working in a system that features him. And did you see how open he got throughout the game last week? Darius Slay in coverage or not, this guy is a must for your lineups.

A.J. Brown, WR PHI – The Eagles wanted Hurts to be a better passer so they got him a phenomenal weapon in Brown. He turned 13 targets into 10 catches for 155 yards last week and will be looking to build off that tonight. Minnesota’s secondary is good, but they are also very much a work in progress. Brown will find the separation he needs to succeed tonight and once these two teams start trading haymakers, he’ll be peppered with targets.

Dalvin Cook, RB MIN – The Eagles were gouged for 181 rushing yards last week by the Lions, so expect Kevin O’Connell to game plan for a heavy dose of Cook tonight. I expect the Vikings to always be a pass-heavy team, but O’Connell knows that his passing attack can be even more effective coming out of play-action. Cook should see a strong complement of carries tonight and should never be overlooked in the DFS space. Don’t be surprised to see him break the goal-line plane for the first time this season.

Miles Sanders, RB PHI – He saw more than 50-percent of the snaps out of the backfield last week and turned 13 carries into 96 yards and his first touchdown since 2020. Sanders works beautifully in this RPO-heavy scheme and should remain a fixture on the field as the Eagles look to maintain a well-balanced attack. People were undervaluing Sanders coming into the season, but expect him to continue to turn heads. The Vikings gave up 111 rushing yards during Week 1’s blowout of the Packers, so there is some serious vulnerability here.

Adam Thielen, WR MIN – He’s not the Thielen of old and he plays in the shadow of Jefferson, but he is incredibly reliable and, as he continues to work his way back from the ankle issues that plagued him all of last season, we should see improved results on the field. As defenses start to key in more on Jefferson, like we should see tonight, more targets should open up for Thielen, including inside the red zone.

DeVonta Smith, WR PHI – It was a bit of a vanishing act for Smith last week as Brown took center stage and never lost the attention of Hurts. But that isn’t going to always be the case and people need to be wary of that. He should make for a nice contrarian play in your DFS lineups as most will be focused on Brown and the Vikings pass-catchers. Patrick Peterson is not the cover-corner he once was, and he may have trouble keeping pace with Smith’s speed.

Dallas Goedert, TE PHI – The Eagles still love their 2-TE sets, but Goedert is not the guy they want tethered to the line. He’s too good of a pass-catcher and once the Vikings start floating their safety towards Brown, the middle of the field should open up. Goedert against a linebacker without safety help sounds like a recipe for fantasy deliciousness over the middle of the field.

K.J. Osborn, WR MIN – When the Vikings move to their three-receiver sets, it’s Osborn who shines brightest. He can be very elusive coming out of the slot and should be able to gain separation from Avonte Maddox. You can’t expect a lot of targets, but if you are trying to differentiate yourself from the rest of the pack, Osborn’s two red-zone targets last week should have your attention.

Kenneth Gainwell, RB PHI – He makes for a decent change-of-pace back for the Eagles and does a good job as a pass-catcher out of the backfield. The focus here should be on the red zone work as he saw two of his five rushes inside the 10-yard line and one of his receiving targets inside the five. He’s a solid contrarian play for the price, so if you are heavily invested in Minnesota’s top guns, he could be a nice salary-saver.

Irv Smith Jr., TE MIN – Big Irv is making his way back from late-summer thumb surgery but is 100-percent good-to-go and becomes a fantastic red zone target for cousins. His frame and ability to gain separation from slow-footed linebackers could be on display inside the end zone tonight, so if you’re looking for a pay-down with some scoring upside, he’s your guy.

Jalen Reagor, WR MIN – O’Connell loves getting in his four-receiver sets to spread the defense and while Reagor wasn’t targeted at all last week, that could change as everyone loves a good revenge-game narrative. Maybe he even returns a punt for a touchdown tonight. They scored that in DFS too, you know!

Boston Scott, RB PHI – He gets the call every now and then when the team is in need of a speedy scat-back. It’s more of a situational thing, so it’s tough to pinpoint exactly when he will be used, but if the Eagles need a little speed coming out of an RPO play, Scott could get some touches, even near the goal-line.

Quez Watkins, WR PHI – Super dart-throw here, but the Eagles are going to need to get more receivers involved, especially if this game turns into a track meet. He’s the guy who will be on the field for three-receiver sets and while that may not be too often, when he’s there, the Eagles like to put his speed and elusiveness on display.