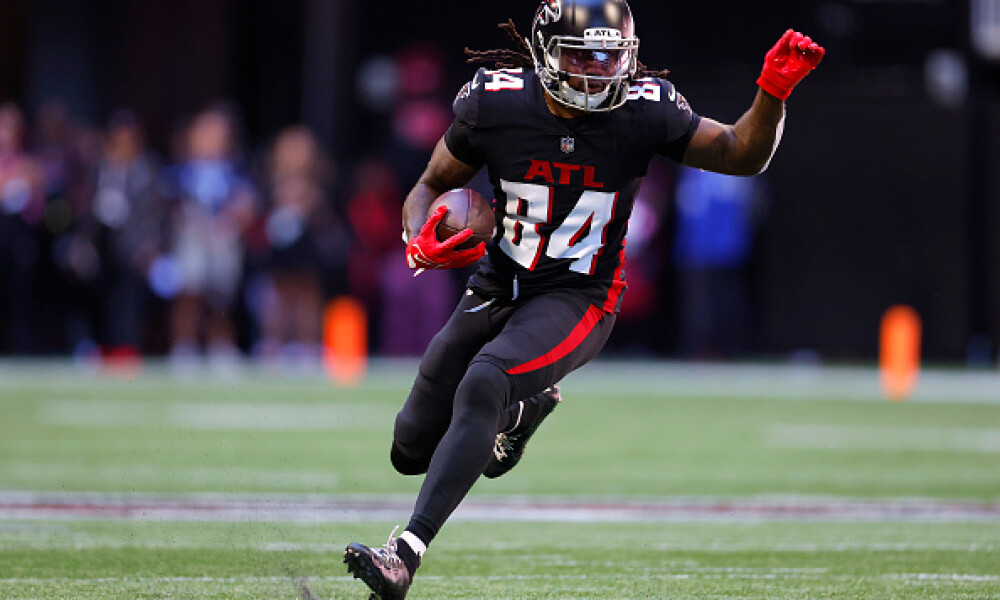 NFL Week 10 is already upon us and we’ve got quite the game on Thursday Night Football to kick off the week. It’s a battle in the NFC South as the Atlanta Falcons hope to stay in first place in the division as they travel north to take on the Carolina Panthers. The big issue for this game is going to be the weather as the entire southeastern United States prepare for the impact of Hurricane Nicole, so be sure to check out the Week 10 NFL Weather Report closer to game-time. The point spread indicates a close game, the game total of 42 indicates low scoring and just the thought of consistent rain and strong winds should tell you this one could get ugly. But as we always say, when building winning DFS Showdown lineups, it’s not about how many points are scored. It’s about having the right guys in your lineups.

Now before we begin, for those who are new to the process, please take a moment to understand what exactly you are getting yourself into by playing single-game Showdown Slates. We love to have some skin in the game, for sure, but these slates are, for all intents and purposes, a lottery ticket. Sure, there are times when the chalk hits and everyone shares in the prizes, but, more often than not, you need to hit on that random dart-throw that differentiates your lineup from that of the herd in order to claim the top prize. As a result, we encourage you to play responsibly and not over-invest. Stick to the GPP contests (single-entry preferred), don’t blow your whole bankroll, and understand that, unless you are a max-entry player, you should prioritize having fun.

Weather: Rain with temperatures in the mid-60s w/ winds blowing ENE at 11 mph

Patterson returned last week and Arthur Smith was not shy about using him as much as he could in his return, carrying the ball 13 times for 44 yards and two touchdowns. He also caught one pass for nine yards, something we may see a little more of this week given the weather and the ill-effects on the long-passing game. Patterson is a focal point of this offense and will be leaned on heavily in this match-up.

He’s the leader of this backfield and despite the potential return of Chuba Hubbard, will see the bulk of the work Thursday. The Falcons run defense is only allowing an average of 106.9 rushing yards per game, but they’ve allowed 11 rushing touchdowns on the year, fourth-most in the league. I wouldn’t expect a huge yardage output, but he’ll get all the carries in the green zone.

This defense flies under the radar usually, but should stand out well in this match-up, especially if the weather is bad. They rank sixth in the league in takeaways with 13 and while they don’t generate a lot of sacks normally, we could see some strip-sacks and fumble in this one. They do a nice job of capitalizing on turnovers so while everyone loads up on running backs, pay down for the defense in your top spot.

This is all about Mariota’s rushing ability as this one could be a sloppy game due to the weather and the passing games aren’t likely to be clicking like either team wants. Don’t expect a lot of yards, but short passes to Patterson will be in play and Mariota is averaging nearly 42 rushing yards per game over his last five, including one rushing touchdown.

Even with the return of Patterson last week, Allgeier still saw almost 40-percent of the snaps, carried the ball 10 times for 99 yards and even caught one pass for 24 yards. He will likely continue to step back into a secondary role, but Arthur Smith is all about the run and Allgeier has proven himself worthy of remaining a strong part of the rotation.

They were torched by the Bengals last week, but in a potentially sloppy game that could see some turnovers, we don’t mind using the Panthers defense in a showdown lineup. The Falcons actually have 12 giveaways on the season and Carolina can be both aggressive and opportunistic when necessary.

It all just depends on how much passing you think Walker does in this match-up. The Falcons’ secondary is soft. Super-soft. They allow the most passing yards per game (300.0) and have coughed up 15 passing touchdowns on the season, but how that plays in the rain is tough to know. But if we’re investing in any pass-catcher on either team, this is probably the lean.

If you want a slice of the Falcons passing game to be different, London is the targets leader on this team and will remain as such even in bad weather. He’s seen 12 targets over the last two games and is usually Mariota’s first look when he drops back to pass. If the rain lets up at all, you can expect the Falcons to take a few shots and test this Panthers secondary.

Again, if you want to invest in any part of the Atlanta passing game, Pitts is another route to take. The Panthers rank 28th in DVOA against the tight end and 25th against slot receivers so the coverage is soft. If Mariota can get the ball to him, we’ve seen Pitts do some damage after the catch and maybe he even gets a red zone look or two.

He seems to be playing on borrowed time with Sam Darnold lurking, so perhaps he uses that as motivation and takes advantage of the Falcons missing A.J. Terrell from their secondary. Obviously, the Panthers will go with a run-heavy scheme, but perhaps, with the return of Chuba Hubbard, they look to more designed screens and check-downs to keep the Falcons off-balance. Walker isn’t much of a runner, so dump-offs might be his bread and butter.

He’s still listed as questionable with the ankle issue, but Hubbard put in a full practice Wednesday and looks ready to go for Thursday night. He’s the third-down, complementary back so his value might shine brighter in the full-point PPR format on Draft Kings, but if he’s getting any sort of green zone work, he’ll be valuable on either site.

His role has increased steadily since the Panthers rid themselves of Robbie Anderson and we like the target share, for sure. What we don’t like is the quarterback trying to get the ball to him. In a game with lousy weather, it’s going to be tough, but short passes to Marshall in the slot may be a key to the Panthers moving the ball downfield.

The Falcons are going to continue rotating in the backs and while Huntley may now sit third on the depth chart with the return of Patterson, he’s still getting some carries and in short-yardage situations as well. If you’re looking to get a little different and go against the chalk of Patterson/Allgeier, then Huntley just might be your guy, especially if he can punch one in at the goal line.

OK, we’re getting closer to dart-throw territory now, but Zaccheaus will still get an extra nod just because of his role and target share. Don’t expect too much out of him, but if you’re playing the max-lineups route, you’ll want a share or two of him.

We’ve seen Tremble’s targets go up a bit in recent games and while the Falcons rank 11th in DVOA against the position, opposing teams are still throwing to the tight end almost 10 times a game and the Falcons are allowing an average of 64.2 receiving yards per game to them. That pushes him just above the dart-throws, but when you’re down this far, that’s what you get.

If there is a receiver to catch a short pass and break away from the defense with his speed, it’s Byrd. He was shut down last week, but in the two games prior, Byrd averaged 71 receiving yards and scored a touchdown in each game. Once he gets the ball out in space, the slick field could be used to his advantage.

If we aren’t sold on the return of Hubbard, then Blackshear should be considered as a part of this Panthers rushing attack. Last week he found the end zone for the first time and served as a nice complement. Should Hubbard be limited at all, there are worse darts to throw.

Looking for NFL Week 10 picks against the spread? Check out the all-new Cash It podcast with Howard Bender & Adam Ronis. A new episode drops every Thursday morning.