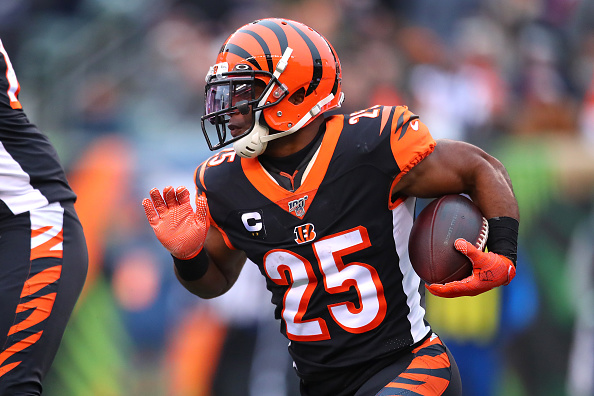 David Montgomery, RB CHI - Montgomery continues to be an absolute beast for this Bears offense. Since the injury to Tarik Cohen all the way back in Week 3 we saw the start of what would become a breakout year for the second-year back as the Bears began to feature him as an everydown player that would also be used in the passing attack. It took some time and a change in play callers for the offense to finally understand that feeding the ball to Montgomery would be a key to their succes and that was never more evidenced than his Week 15 performance when he carried the ball a career high 32 times for 146 yards and a touchdown. Over the last four weeks Monty is averaging 17.8 carries for 108.5 yards and 1.3 touchdowns while chipping in 3.3 catches on four targets.

Tony Pollard, RB DAL - With Ezekiel Elliott ruled out we got to see Tony Pollard finally get run as the Cowboys lead running back and he did not dissapoint fantasy owners with his performance as he finished with 12 carries for 69 yards and two touchdowns while adding in six catches on nine targets for 63 yards. Pollard capped his day off with a long touchdown run at the end of the game for the Cowboys and proved that if Zeke is not 100-percent that he can certainly fill the void.

Giovani Bernard, RB CIN  - In the five weeks leading up to Week 15 Bernard was averaging just eight carries for 23 yards as well as three catches for 17 yards. During that span he never found the end zone, in fact he was benched in the Bengals Week 15 loss to the Cowboys after fumbling the football early on. So, with a matchup against the Steelers on the horizon, few gave Bernard a second look and that was the mistake! The Bengals shocked everyone by upsetting the Steelers and Bernard played a big part in it as he carried the ball 25 times for 83 yards and a touchdown. In Week 16 he has a nice matchup against Houston, let's see if this performance was enough to spark a run towards the end of the season.

Derrick Henry, RB TEN - Funny to think Henry had just an OK day when you see that he rushed for 140 yards and a touchdown but the oppurtunity for so much more was there as three other rushing touchdowns were scored in this game with two going to QB Ryan Tannehill and one going to backup Darryton Evans. Henry will look to toss up a multiple-touchdown effort in Week 16 against a Packers defense that ranks 21st against the run this season.