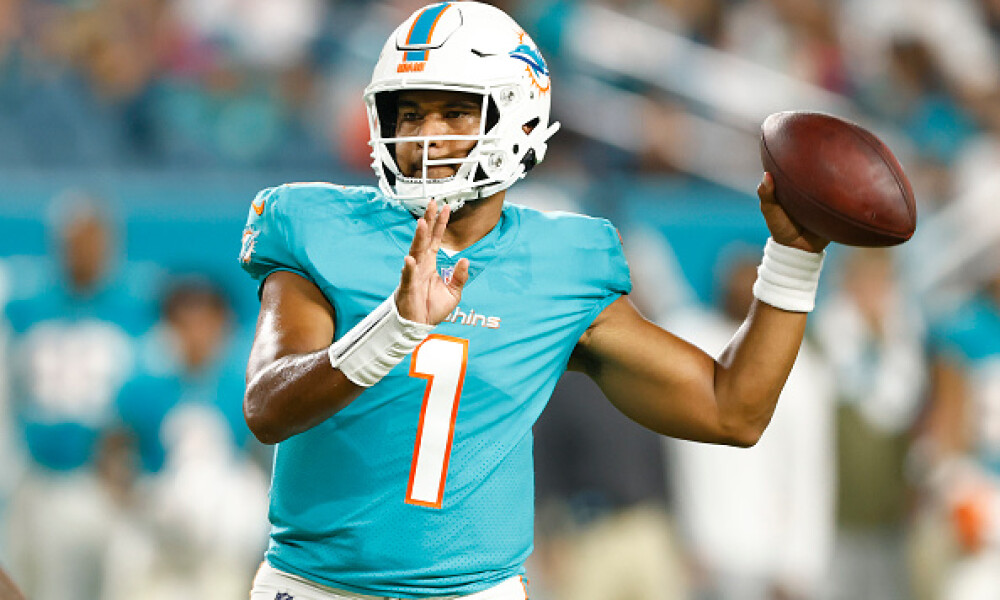 You know the 2022 NFL offseason has been wild when Carson Wentz being traded to the Washington Commanders doesn’t even crack the top three NFL news stories for quarterbacks this offseason. With Russell Wilson, Matt Ryan, and Deshaun Watson all traded as well, the landscape is set to look quite a bit different for fantasy football this year. That’s before we even get into free agent moves or the 2022 NFL Draft!

Beyond switching organizations, there are a lot of different changes that can affect a quarterback's production for fantasy football. The coaching staff could change, bringing in a brand new scheme. The general manager could shift the roster around and you could add or lose weapons. The offensive line could get better or worse. Heck, we’ve seen a boost in performance for some quarterbacks after rule changes in the NFL. There are a lot of moving parts. In this article, we’re going to take moment to look at everything that’s happened so far this offseason and let you know who the biggest winners and losers are for fantasy football.

For a second here, we just need to forget whether we think Tua Tagovailoa is a good quarterback or not in a vacuum. How is he not a winner after this off-season? The Dolphins first bring in Mike McDaniel, who is supposedly one of the brightest up-and-coming offensive minds in the game. Then they franchise-tag pending free agent tight end Mike Gesicki, who was second on the team in targets last year with 112. Miami then goes out and grabs slot man Cedrick Wilson, who quietly amassed 602 yards and six touchdowns last season. Finally, the big hammer dropped when the Dolphins traded for super megastar Tyreek Hill and extended him for four years. The only downside for Tua is that all this firepower leaves no excuses and puts him on the hottest seat in the league. They did sign Teddy Bridgewater to a two-year deal, so the organization might have their finger hovering over that button.

Some of these might seem obvious, but obvious is good for fantasy football because predictability leads to consistency. There is an alternative universe out there where this move is actually bad for Matt Ryan’s value in fantasy football. In that universe, Julio Jones stays healthy (and with the Falcons) and Calvin Ridley doesn’t get suspended for the entire season for gambling. Atlanta would still draft Kyle Pitts and then keep Russell Gage. With a healthy Jones at split end, Ridley at flanker, Gage in the slot, and Pitts at tight end, that would rival any weapon set across the league.

Instead, a bunch of bad stuff happened and the Falcons are now entering (at the very least) a bridge year and a possible lengthy rebuild. Meanwhile, the Colts already have two amazing pass-catching backs, Michael Pittman as a rock-solid split end, Parris Campbell could finally be healthy, and one more weapon in the draft that could put them over the top. Here’s an actual clip of Matty Ice leaving Atlanta for Indianapolis.

Obviously, the Broncos are really the big winner here. There's an argument to be made that the weapons Russell Wilson has now in Denver aren’t THAT much better than what he had before in Seattle. In fact, some might even argue that Tim Patrick and/or KJ Hamler don’t make up the difference between DK Metcalf/Tyler Lockett and Courtland Sutton/Jerry Jeudy. However, there is one key factor that makes a difference for fantasy football – a factor that was so prevalent during Wilson’s time in Seattle that a trademark was actually filed over it. Yes, it’s actually time to “Let Russ Cook” (please don’t sue me).

Offensive coordinator Nathaniel Hackett, who comes over from the Green Bay Packers, has already said publicly that the plan is to build an offense based on “what Russell likes to do." After years of quietly (and not so quietly) complaining about how things were run in Seattle, Russ™ is finally going to get more say in Denver. We’ve known all along that he had the skill, so we might finally see the ceiling of his production. Yes, I know Deshaun Watson is a huge winner too with the money and getting to leave the worst organization in football. Quite frankly, though, I’m tired of talking about him. So there.

We did say some of these would be obvious. Still, we have to sit down and peel away all the layers of this Aaron Rodgers onion of an offseason. Yes, he got a lot of money – but that doesn’t help us for fantasy football. In fact, it kind of hurts us. Especially when that may have contributed to the team trading away his best good buddy Davante Adams, who also happens to be the best wide receiver in the league. The Packers also couldn’t manage to bring back Marquez Valdes-Scantling, who was the de facto second wide receiver. Plus, as we mentioned, they lost offensive coordinator Nathaniel Hackett. Green Bay did manage to bring back tight end Robert Tonyan, who tore his ACL last year – so that’s something.

I’m sure there will be some Cowboys fans or Dak Prescott dynasty stans that say losing Amari Cooper is “addition by subtraction” – or something cute like that. I’m not a physicist or an actuary or anything, but my simple math rankings for offensive changes go as follows:

When you have the offense the Cowboys had in 2021, “nothing” would have been a great offseason. Instead, they lost Amari Cooper, Cedrick Wilson, La’el Collins, Connor Williams, and Blake Jarwin. You can argue until you are blue in the face as to whether these players are “good” or not. However, Dallas didn’t really replace them with anything you could call better. So, as of this moment, Dak Prescott is a loser this offseason – and I’m absolutely ready for the commenters on Reddit to explain to me why that’s not true.

I usually try to stay impartial and just analyze the football side. In fact, folks who know me know I’m actually a big Dak Prescott stan myself – which is why the section above was painful to write. The Baker Mayfield situation, though, goes a bit beyond fantasy football. Obviously, Baker is a big loser for fantasy here because he lost his job with a competitive team, and the only remaining jobs out there aren’t particularly great – that we do know.

Still, you kind of have to feel for a guy that enjoyed representing Cleveland and had a lot of fun with the city and fans. No matter what you have to say about his talent, Mayfield did bring them their first playoff win in 25 years. Plus, that goes without really talking about the guy they brought in to replace him because we don’t actually know the truth of that situation either. What I can say though is that I’m rooting for Baker Mayfield to land on his feet somewhere.