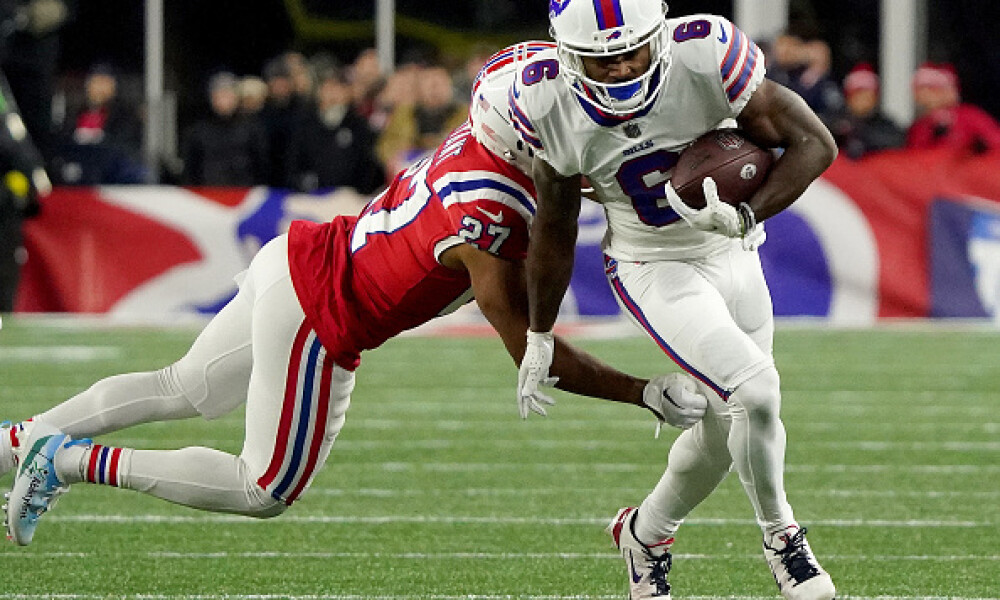 We’re down to the final eight teams in the NFL postseason and as the teams dwindle, so do the injuries. There aren’t many injuries from this past weekend, which is great news that teams – mainly offenses – are at full strength as the postseason continues. Let’s look into the ailments that some guys are dealing with, only with teams that are still playing.

We saw a report come out this weekend from Fox’s Jay Glazer that the 49ers are hopeful to get Jimmy Garoppolo back at some point this postseason. That said, if he does come back, he’ll serve as the team’s backup quarterback.

The 49ers' third receiver on the depth chart is dealing with a minor ankle sprain and is listed as day-to-day on the team’s injury report. Jennings played in 42% of the team’s snaps in the Wild Card round and caught two passes for 41 yards on five targets.

UPDATE: 1/19 @ 3:30 pm ET - After not practicing again on Thursday, the Chiefs went ahead and ruled Mecole Hardman out for this weekend's Divisional playoff game against the Jaguars. Hardman tweeted about the situation yesterday and it seems like if the Chiefs advance past the Jaguars he may be available. Whether that's in the AFC Championship game or the Super Bowl, if they make it, remains to be seen,

UPDATE: 1/18 @ 1:45 pm ET - Hardman is not practicing on Wednesday and this is something that should officially make us worried about his status heading into the Chiefs Divisional Round game against the Jaguars. Hardman himself put out a tweet on the situation saying “Marathon > Sprint.”

It was reported that Hardman was questionable heading into the Chiefs' final game in Week 18 and was ultimately ruled out. That gave him two extra weeks to recover, considering the Chiefs ended a first-round bye. We last saw Hardman in Week 9, so even if he returns in the postseason, he’ll likely be limited.

UPDATE: 1/19 @ 3:45 pm ET - When asked about Edwards-Helaire's status for this weekend, head coach Andy Reid suggested he likely won't be activated off of injured reserve this week. If the Chiefs advance this weekend, it's possible he's active for the AFC Championship game, especially considering he's back at practice.

UPDATE: 1/18 @ 1:45 pm ET - It was a big day on Tuesday as Clyde Edwards-Helaire returned to practice which opened up his 21-day window to return to game action. Even if he is back, who knows what his workload will be with the emergence of Jerick McKinnon and Isiah Pacheco in the backfield. We'll see CEH can get onto the field against the Jaguars.

UPDATE: 1/19 @ 3:30 pm ET - Moore has logged three straight full practices and is off the injury report ahead of this weekend's game with the Jaguars. Moore's been largely left out of the Chiefs' offense this year but maybe, with Mecole Hardman out, Moore's role could pick up a bit. That remains to be seen with Kadarius Toney in the fold.

UPDATE: 1/18 @ 1:45 pm ET - The Bills seemingly played it safe with Isaiah McKenzie last game as he himself said he was 90% healthy last game. He was asked by the media on Wednesday if he'll play this weekend and he said “Yes.” McKenzie is ready to rock for the Bills for their postseason game.

During the middle of the practice week, Isaiah McKenzie injured his hamstring and it was bad enough to where he was deemed inactive in the Bills Wild Card game against the Dolphins. The Bills play this coming Sunday, so there’s a chance we do see McKenzie back on the field. His 42 catches during the regular season were fourth on the team. Cole Beasley benefitted the most from McKenzie’s absence as he scored a touchdown in the Bills' thrilling win on Sunday.

It was Week 4 when Jamison Crowder fractured his ankle and we haven’t seen him since, but he’s been practicing and is seemingly getting closer and closer to returning to action. The further the Bills advance in the postseason, the better possibility Crowder has of returning. If Isaiah McKenzie can’t play this upcoming weekend, it wouldn’t hurt Buffalo to have Crowder back. Head coach Sean McDermott spoke with reporters on Monday and said he’s unsure if Crowder will in fact play this weekend. We’ll have to see how things play out at practice this week.

UPDATE: 1/19 @ 3:45 pm ET - Jamal Agnew was dealing with the same shoulder injury heading into the Jaguars' last playoff game against the Chargers and played through it. He was limited at practice on Thursday and per the Jaguars' official injury report, he's questionable for this weekend's game.